I make houses and worlds in virtual reality. This seems like a nice place for inspiration.

I have been making a world for other gamers. It's what I like doing, designing and building. The world is now finished and I have started building more freely. These houses include objects made by others and they follow the file for the house in most cases.

April 15'th In finished a big house similar to the Moorish design, but this time in Greek Style. I did some research on Knossos on Crete, but I had a request this time for the Palace of a Greek Goddess. 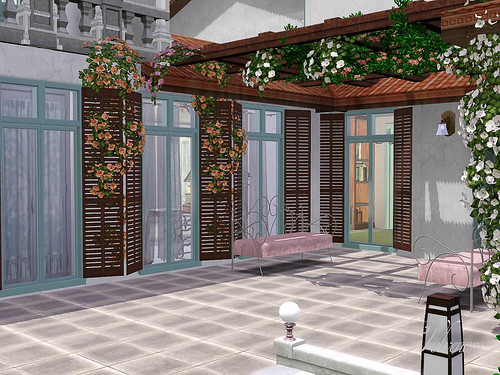 For some reason using those bright colors on my house just turned out to be impossible. It had to be white, and after a while it turned fusion with modern design. It was just a challenge and I don't know where it came from. 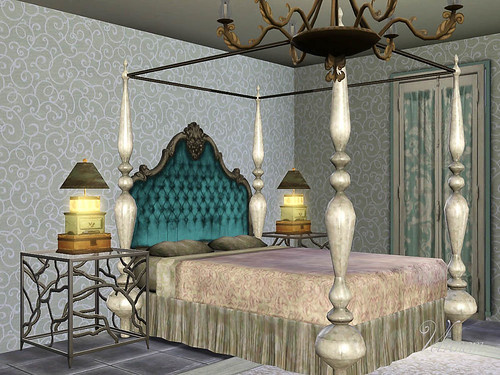 The house has several balconies and is built like houses in warm climate often are, more outside than in perhaps. Where I live we would make sure the rooms are close to each other, so to keep each other warm. 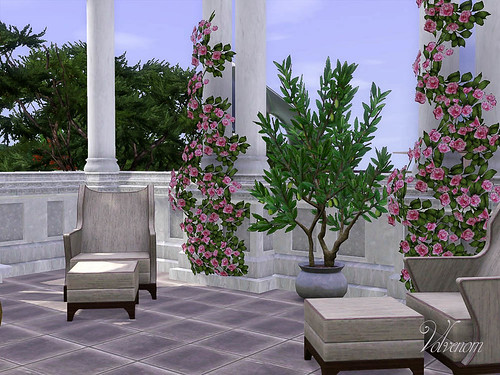 In January I started working on my first Islamic/Moorish design villa to be downloadable. Tag for the colors are 140114. It's a very different style than what I'm used to so I made two discarded attempts. One attempt was for a square Alhambra, but this is just a villa made with a Pompeii'ish floorplan from a previous reconstruction of Villa Dei Misteri. As it turns out Roman and Moorish floorplans are very similar. One major garden with several smaller gardens and courtyards in between. They also have these hallways all over the place. I visited Alhambra in Spain last summer, and it was a very nice place. You know they used to paint all the delicate carvings in bright colors? These days we really prefer the gorgeous carvings in their own in natural creme and browns. This house is now finished and download available here: http://modthesims.info/download.php?t=523263

In december 2013 I finished up the Cubes house. Architecture is almost cubistic and inspired by a house I saw in a magazine. The interior is inspired by some parts from a Cambodia set I downloaded. The Exterior is in bright pink, red and yellow. I have used those colors a bit inside as well, just to tie it all together. For this house I made a video with music, I hope you like it.

Also in december I have started on an Art Deco like house inspired by some windows I have downloaded. What does Art Deco look like really? Is this too modern? I like colors so the window on the left is colored in a really intense neon yellow with a dash of green, is it Lime? The picture above is taken with a mod to change the athmosphere of the world the picture has been taken in. I prefer the original athmosphere though, because it's easier to compare. I'm also a minimalist at heart, anything that isn't needed has to go. I like this house, but I would perhaps like it even more basic.

Stranda is my first world, and I finished it in January 2014 as well. I started working on colors and design in march 2012. Download on my blog, link above under the building menu on my site.

It has a big waterfall in two parts and little lakes at the top of each. The Olivia below has been placed among bushes, and plants at the top. Electronic Arts has made the trees, plants, windows, doors etc. I have placed them on a structure with walls where I want them. I use textures made by EA and recolor them and mix textures much as I want. The result can be very similar to what I make here on CL. Very confusing, surpricing, gorgeours, ugly, rough or whatever else you may want.

The Olivia Restaurant was my last creation in april 2013: To show you a bit of the variety from Stranda:
This is the Explosion. It's made partly with inspiration from Colorlovers. I have combined a palette from here with other colors and ended up on this: The Cliffhouse and Tora is sitting on a deckchair overlooking the sea and cloudy sky. The house is made by me again, she's invading my house, but it has to be tested if I'm going to upload it. Sometimes it's nice to know a little bit about what gamers do as well. It's only polite really, to pay some attention to what they experience. Needless to say I love design and architecture, and a technical challenge feels at home with me.


Your rainbow is strongly shaded orange and violet.


What it says about you: You are a creative person. You appreciate a challenge. You are patient and will keep trying to understand something until you've mastered it. Others are amazed at how you don't give up.

Find the colors of your rainbow at spacefem.com.
440 Comments
Showing 1 - 10 of 440 Comments
Reply

thank you, Volvenom--I am in awe of the worlds you create!♥♥♥

Thank you for the love - I really enjoyed your page by the way - your virtual architectural creations are wonderful - I especially like the Moorish style villa - gorgeous colors.

thanks so very much!

Thank you so much for the love! and I wanted to say, your virtual architecture is INCREDIBLE!

Thank you very much!

thanks so much for loving