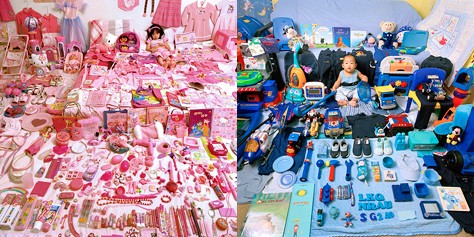 The Pink and Blue Project by Jeongmee Yoon

How the color identities 'pink for girls and blue for boys' ever really got started; who knows, or, who really cares, but the fact is, these assignments do exist, and they are based solely on gender, making it nearly impossible for me to wear anything warmer than scarlet without affecting my internalized 'blue' masculinity and being called 'Strawberry Shortcake.'

While this question has been taken up by COLOURlovers before; and this person said this, and that person said that. It seems though, that these gender identity colors appeared after WWII, which also happens to coincide with the United States' greatest consumer expansion and the development of marketing, advertising and public relations, not that I'm inferring a correlation, but Barbie should be held accountable for at least some of it.

Jeongmee Yoon's 'The Pink and Blue Project' was inspired by this very observation of gender and color, and offers a visualization of this divided world of pink and blue.

"The Pink and Blue Project" was at first motivated by my daughter. At five years old, she loves pink so much that she wants to wear only pink clothes and use only pink toys or objects.

I found that she is not unusual and most other little girls in the U.S. and South Korea love pink clothing, accessories and toys. This phenomenon seems widespread among various ethnic groups regardless of their cultural background. It could be the result of an influence of customs or the power of pervasive commercial advertisements for merchandise such as Barbie and Hello Kitty. 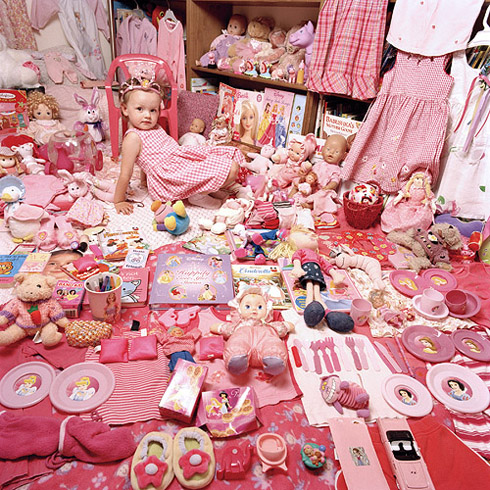 While producing the "pink" images, I also became aware that many boys have a lot of blue possessions and started photographing them as well. Through advertising, consumers are directed to buy blue items, symbolizing strength and masculinity, for boys; and pink items, symbolizing sweetness and femininity, for girls. 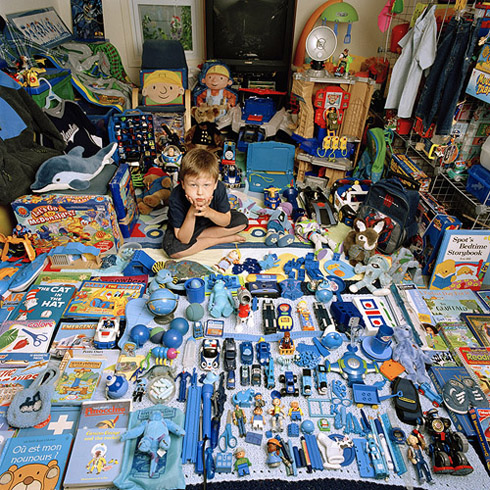 To make "The Pink and Blue Project" images, I visit the child's room, where I display and rearrange his/her colored accessories. I ask my models to pose for me with their pink or blue objects, in an effort to show the viewer the extent to which children and their parents, knowingly or unknowingly, are influenced by advertising and popular culture. I first lay out the larger items, blankets or coats, and then spread smaller articles on top of the clothes. This method references objects that are displayed in a museum collection. In some pictures, the children even look like dolls.

I use a 6x6 format Hasselblad camera because the square format enhances the effect of the many crowded objects on display. My photographs are taken with the smallest aperture, f-22, to get a hyper-realistic depiction of each object and person. 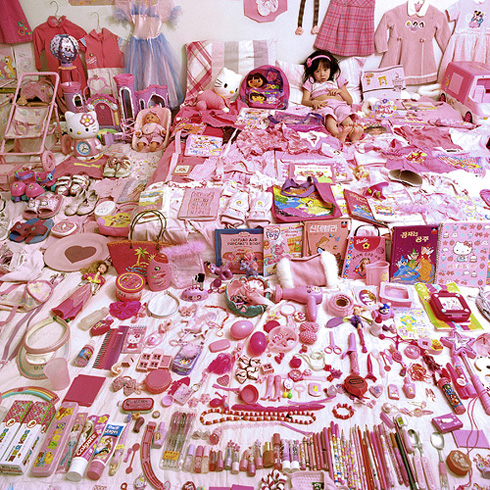 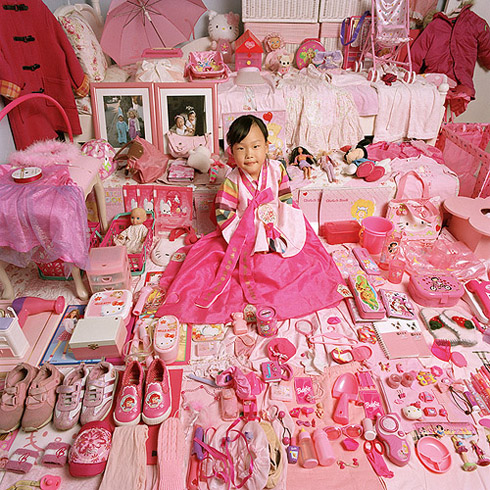 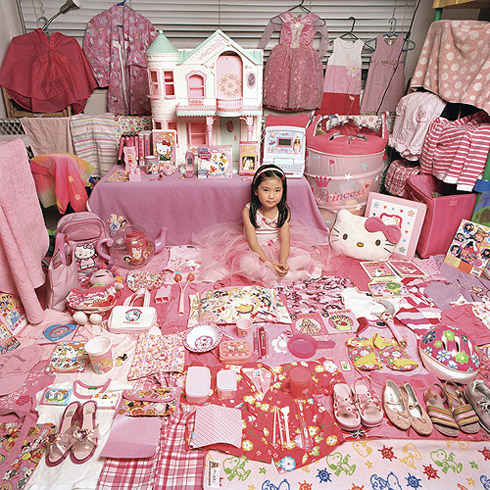 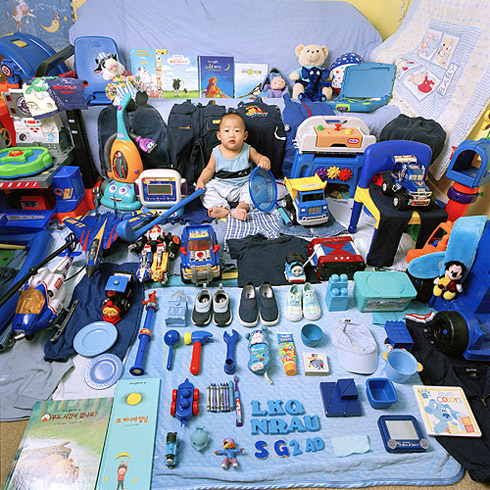 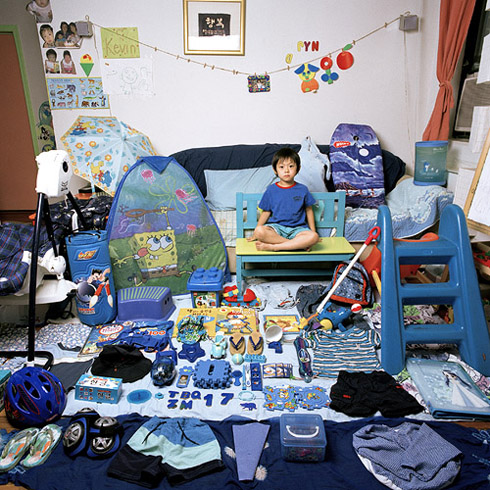 Jeongmee Yoon was born in Seoul, South Korea and moved to New York in 2004. She received her BFA in Painting from Seoul National University, South Korea and her MFA in Photo Design from the Hongik University, South Korea. She recently graduated from the School of Visual Arts with an MFA in Photography, Video and Related Media. She is currently participating in the International Studio and Curatorial Program (ISCP) in New York and is preparing for her solo exhibition in May 2007 of The Pink and Blue Project in Seoul, Korea, which is supported by the Geonhi Arts Foundation.
- From Artinfo

All photos from the artist.

I LOVE this.
Reply

I know that girls are highly restricted (often willingly, it seems) into obsessing over pink. I didn't know, however, that boys could get so tied into blue. At a very early age I knew I liked purple but now I lean towards blue-violet and I like red and green too. Red has alternated between first and second for me. Green and I have a much more complicated and stormy history (all those veggies. Yuck!)

It's a shame, really. Boys generally have their pick as long as it isn't pink. Girls kinda have their pick but pink is just pushed on them. It's a very strong minded girl who prefers something other than pink these days.
Reply

For my kids (never mind the sex) it's going to be all green :)
Reply

If you can get what you want in green... I've tried so many times to get out of that blue trap with my little boy but it's unavoidable for some items. Normally I don't like pink too much anyway, but I've actually bought him toy boxes in blue AND pink simply because I liked both designs and thought why not? If he doesn't like them later in life, tough luck. I am also buying him a lot of orange and red t-shirts, some of them getting awfully close to pink. But I'd never buy him shoes in those colours - I wouldn't wear those either! it's really not so easy to avoid the stereotypical colours; I'm very curious which colours he will like in the upcoming years!
Reply

These are the colours I love on my son:

I like the 4th pic down, the girl has palettes on her sleeves :D.
Reply

My mom always knew I'd be a handful when I didn't like pink when I was little. I loved being girly and dressing up as long as it wasn't pink.
Reply

Years ago I swore up and down If I ever had a daughter she would never wear pink. ha ha Well folks, when my lovely little one was 2-3yrs old it became a daily fight on what to wear! Pink = Girl! She was terrified people would think she was a boy if she wore any other color—and no amount of discussion would change it. She won the argument and now I allow to to wear what ever she wants, especially now that she is having to wear school uniforms during the week. I hate pink, but love my stubborn-girly-girl-pink-wearing-daughter.
Reply

"This phenomenon seems widespread among various ethnic groups regardless of their cultural background. It could be the result of an influence of customs or the power of pervasive commercial advertisements for merchandise..." Well, maybe, but there must be pockets here and there - the Amazon, Mongolia - where children who have not been too badly brutified by marketing could be tested as to their colour preferences. I remember mine quite well because it was a colour that practically sent me into trances when I was 3 or 4 - phthalocyanine blue-green.
Reply

I was always crazy about purple as a kid, though I'm fonder of pinks now.

I saw Jeongmee Yoon's Pink and Blue exhibit at the International Open Studios last year or maybe it was 2006, and I loved it! I live in a Brooklyn and all the little girls wear pink from head to toe. It's restricting to me. When I was little I wore all sorts of colors except black.
Reply