"Luck is probability taken personally," say most mathematicians, scientists and skeptics, but to some, luck is what gets them by and can be brought on by anything. If asked what their favourite or lucky number is, most people will choose between three, seven, and thirteen, and this is of interest because all of those are prime numbers, and anyone can tell you that prime numbers have one undeniable quality in common. They don't let anyone come between them and their man, number one.

All jokes aside, whole cultures have embraced luck, and sources of luck, in many different forms. The number three shows up in good things all over the place, from the Trinity to Pagan rituals and prayers. Seven has even surfaced commonly in lottery games, and a few of my friends think today will be lucky since it's the seventh day of the seventh month of the year two-thousand-seven. Thirteen is perceived as unlucky by the masses, but embraced by the outcasts as their saving grace. Generally characterised by better-than-good fortune, luck can seemingly be brought on by prayer, voodoo, hoodoo, sacrifices, or spells. Wishing someone luck before an event has become more of a motion than a statement, coming as a reaction, like 'thank you' or 'I'm sorry.' It can also be carried in objects.

But aren't there lucky colours?

For the Record: Adobe Kuler vs COLOURlovers

I get emails, instant messages and love notes pretty often asking if I've seen Adobe Kuler and if I'm upset about it... So here is my opinion on the matter.

Back in Nov. of last year Adobe Labs launched Kuler: A 5 color palette creation tool, built around rating, tagging, commenting and sharing the palettes. Craftzine gushed, "Not only can you create your own palettes, you can get inspired by the popular color combinations already uploaded by other users. Genius!"

I take the last word in that sentence with pride. The idea is genius... I should know, I created it 2 years earlier when I built COLOURlovers. 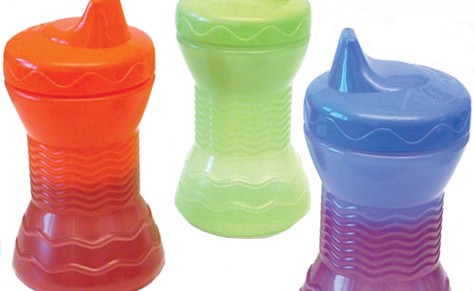 The world is full of wonder. Jellyfish and other sea creatures can change colour at will or in reaction to stimuli. Chameleons blend into surroundings. Moths in Liverpool have evolved to disguise themselves to a spattering of pollutants on the sides of white buildings.

Magnets can change the colour of a liquid. At least that's what scientists have lately discovered with nanotechnology.

It's a Small World, After All

'Nanotechnology is full of surprises and new applications are discovered every day. One of the most unusual is the recent experiment of a team of scientists who were able to make a magnet change the color of a liquid, turning it from coffee-brown to orange, then green and finally dark blue. ... The liquid is actually a solution of iron oxide in water and this is the first time anyone has proven such a strange effect of magnetism.'

The iron-oxide solution could be employed in new displays, improving quality and colour range, and in rewritable electronic paper, which is already available.

To learn more, read the article at Softpedia.

A while ago, a number of COLOURlovers with great ideas and ispirations contributed to a forum thread called Fruit Basket! started by liddle_r, which brought wonderful colours and combinations. I'd pick them all as favourites if I could, but here are some (in no particular order) of the palettes that I liked especially, and if you like these, check out the thread on the forum and find your own favourites. It was hard to choose just these few.

Every year here in the States, we celebrate independence by lighting something on fire. Thanks to the science of pyrotechnics, and care, this can be somewhat safe, but the interesting part about fireworks isn't how much noise we can make with gunpowder. It's all about the colour.

I was surprised to learn that the burst of light and colour is actually the contents of a firework cooling down. When heated, the chemicals involved take on a lot of energy, and when cooling, they release that energy while shining brightly. The base ingredients are black powder, an oxidiser, and a fuel source. The oxidiser provides a higher amount of oxygen than the surrounding that air so that the firework can burn adequately. To get a sort of hands-on idea of what goes on inside the firework, sparklers will show you best. 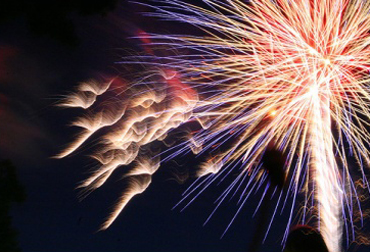 A little while ago we showed you 11 of the Great Color Legends and why they exist... and now we're back with 13 more great color legends... Green Cards, Blue Balls, Highlighter Yellow, Ferarri Red & more. Be sure to let us know if there is a great color legend you'd like us to cover in a future edition.

this is compilation of data, source credits given at the end of the article.

Why is Envy a Green Monster?

Color associations vary greatly from culture to culture, just as each language or dialect has unique colloquialisms that are often misunderstood or lost in translation. In many Western cultures the feelings of envy or jealousy are commonly associated with the color green. However, in German the feeling is most closely related to the color yellow, as the phrase "gelb vor neid," or "yellow with envy" suggests. Moreover, in Arabic the same association is made, as noted in the common phrase "yasfaru wajhahu mina al-Heqd" or "his face turns yellow with envy."

Green is often tied to growth and fertility, thus creating an illogical connection to such a counterproductive feeling as envy or jealousy. This association first appeared in the seventh century B.C., according to etymologists Judith S. Neaman and Carole G. Silver, as the poet Sappho described a stricken lover's appearance as "green." At that time the words "green" and "pale" were often used interchangeably.

Starving for a New World of Color

It seems like just about anything with a battery can take a photograph these days. From mobile phones to the MacBook's built-in iSight and keychains to wristband underwater cameras, the camera has stepped away from being just a box of light.

I remember the wonderful entity known as 'they' saying that the human eye has the equivalent of about five-hundred megapixels, and that's how we can perceive depth and the difference between a dramatically realistic-looking photograph and an actual object. With digital cameras crawling up the megapixel mountain, I don't think five-hundred will be seen in my lifetime, but I never thought seven megapixels would be seen either, and I have seven-point-one on my desk. Looking back at film, it seems the evolution of putting a camera in common hands has been fueled by a hunger to share and be shared. 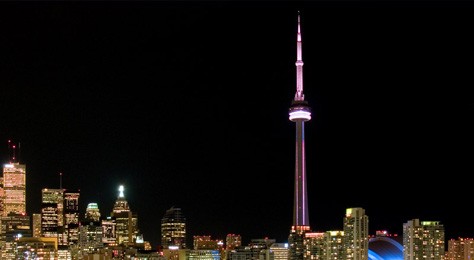 The Toronto Skyline got a lot more colorful last night. While the CN Tower has been testing it's new lighting system for the last few weeks... they officially flipped the switch last night on their new multi-million dollar lighting set-up. The official ceremonies went off last night with some music, festivities and lots of excited watchers.

Now capable of projecting millions of colour combinations, the CN Tower of Toronto just got a colour makeover. Not only is it looking good... it should be feeling good to, as the new lighting set-up uses 10% less power than the old lighting system.

The requried spending for the new system was C$2.5 million ($2.4 million US) for 1,300 shoe-box sized fixtures that will last 10 years. It will use 10 percent less energy than the current lighting effects and 60 percent less than the fully lit tower of the 1990s.

To read more about the new lighting set-up, and to see more photos of the new colors in action, CN Tower Illuminated - Toronto, Meet Your New Skyline!.

HTML 3.2 specifications identified sixteen colors that can be used by name to define color in HTML and CSS. But don't worry you can use more than sixteen colors in HTML... you'll just need to know the six character HEX values and we've listed pretty much all of the ones you'll need on one page.

Any television show that markets itself as 'cool' is laden with the tiniest in swimwear, washboard abs, and bad attitudes. Love affairs come in episode four. White, or near-white sand beaches with crystaline blue water establish the settings to be most exotic, as if anything can happen. Grey or brown rocky beaches spell adventure or trouble. Tonnes of memories are forged and shattered over the sandy spans. When it comes to summer, pop culture has it all chalked up to raucous beach parties, crashing waves, and clashing rivals. Glances over super cool sunglasses varying in intentional temperature episodically leave the in-land majority at a loss, with no sand for all those long walks.

Before becoming the symbol of 'cool,' sunglasses first came about as a common accessory because of the discomfort sunlight can present to the human eye. Although now widespread, the first documented case of lenses being used to as a visual aid, whether to guard from glare or distance strain, was by the first-century Roman emperor Nero as he watched the gladiators competing in sand pits through the green of an emerald. While today's glasses seem to come in all colours, and are all easily made of plastic, the first corrective and darkened lenses were made of glass, which is mainly comprised of silicon dioxide.