All About the Colorful @ (At Symbol)

The @ (a.k.a at-sign, at-symbol, commercial at, snail, arrobase, monkey tail, little mouse, asperand, alphastratocusa along with many other names) is very familiar to us in the digital age, but like so many other things that are perfectly adapted and @ home in the digital age its historical uses, and the development of the symbol itself, is often never known, taken for granted, and forgotten.

While There are many different theories of how @ developed, it is fairly obvious its first widely accepted use was for representing commercial pricing rates ("at the rate of" 12 @ $1 = $12). It wasn't until 1971 when Raymond Tomlinson, an American programmer, used it as the natural division within the first e-mail message ever sent, that @ took on its modern meaning, and subsequently, a symbol for "The Internet", computerization, or modernization as a whole.  Now it has gone as far as being admitted into the Museum of Modern Art's Design & Architecture collection.

Scroll down to see what people think the color of @ is.

"No one knows for sure when it first appeared. One suggestion is that it dates to the sixth or seventh century when it was adopted as an abbreviation of “ad,” the Latin word for “at” or “toward.” (The scribes of the day are said to have saved time by merging two letters and curling the stroke of the “d” around the “a.”) Another theory is that it was introduced in 16th-century Venice as shorthand for the “amphora,” a measuring device used by local tradesmen." - Why @ Is Held in Such High Design Esteem

A hypothetical evolution of the at-sign

Medieval monks abbreviated the Latin word ad (at, toward, by, about) next to a numeral.

It was originally an abbreviation of the Greek preposition ανά (transliterated ana), meaning at the rate of or per.

An Italian academic claims to have traced the @ symbol to the Italian Renaissance, in a Venetian mercantile document signed by Francesco Lapi on May 4, 1537. The document is about commerce with Pizarro, in particular the price of an @ of wine in Peru; @ meant amphora (Italian anfora; Spanish and Portuguese arroba). Currently, the word arroba means the at-symbol and a unit of weight. In this usage, the symbol represents one amphora, a unit of weight and volume based upon the capacity of the standard amphora jar, and entered modern meaning and use as "at the rate of" in northern Europe.

From Norman French "à" meaning "at" in the "each" sense, i.e. "2 widgets à £5.50 = £11.00" is the accountancy shorthand notation in English commercial vouchers and ledgers to the 1990s, when the e-mail usage superseded the accountancy usage. It also is so used in Modern French and Swedish; in this view, the at-symbol is a stylised form of à that avoids raising the writing hand from the page in drawing the symbol; this compromise between @ and à in French handwriting is in street market signs.

@ was present in the 1902 model Lambert typewriter made by Lambert Typewriter Company of New York. Its inclusion in the original 1963 ASCII character set was unremarkable as it was a standard commercial typewriter character (the 1961 IBM Selectric typewriter's keyboard included @).

Arroba sign, used at the "taula de Ariza" registry from 1448, to denote a wheat shipment from Castile to the Kingdom of Aragon.

The Aragonese historian Jorge Romance located the appearance of the @ symbol at the "taula de Ariza" registry from 1448, to denote a wheat shipment from Castile to the Kingdom of Aragon.

BBN Technologies' Ray Tomlinson is credited with introducing this usage in 1971. This idea of the symbol representing located at in the form [email protected] also is seen in other tools and protocols; for example the Unix shell command ssh '[email protected]' tries to establish a ssh connection to the computer with the hostname 'www.example.com' using the username 'jdoe'.

On some online forums without proper threaded discussions, @ is used to denote a reply; for instance: "@Jane" to respond to a comment Jane made earlier. Similarly, in some cases, @ is used for "attention" in e-mails originally sent to someone else. For example, if an e-mail was sent from Catherine to Steve, but in the body of the e-mail, Catherine wants to make Keirsten aware of something, Catherine will start the line "@Keirsten" to indicate to Keirsten that the following sentence concerns her. This also helps with mobile e-mail users who can not see bold or color in e-mail.

@ In The Real World 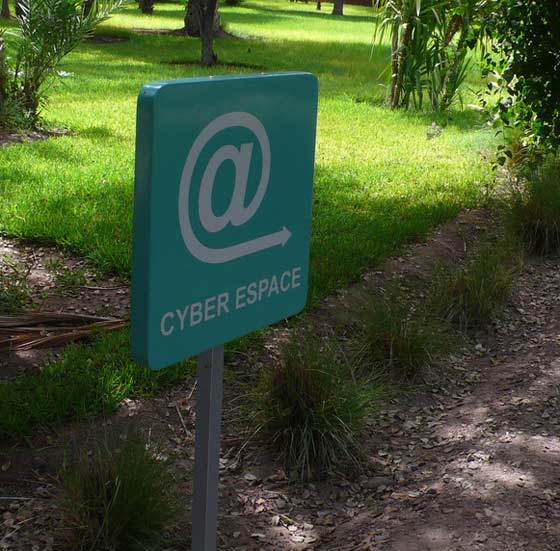 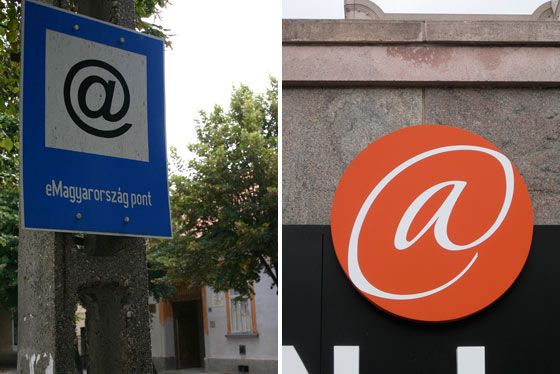 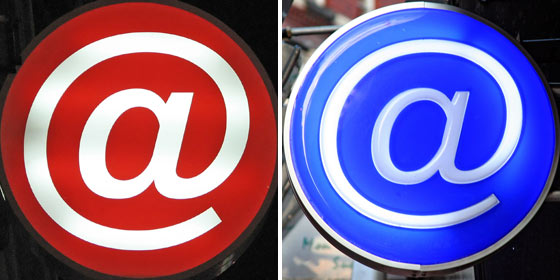 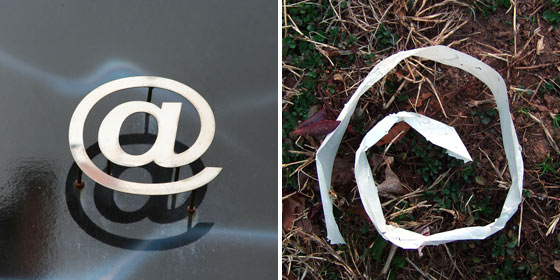 Most text adapted from Wikipedia/At_sign

Why @ Is Held in Such High Design Esteem - Nytimes.com

www.colourlovers.comDavid Sommers has been loving color as COLOURlovers' Blog Editor-in-Chief for the past two years. When he's not neck deep in a rainbow he's loving other things with The Post Family (http://thepostfamily.com/), a Chicago-based art blog, artist collective & gallery.
13 Comments
Showing 1 - 13 of 13 Comments
Reply

good article, never had no clue where it came from.

It's one of those symbols lost in antiquity - but it's become so pronounced now that us "young people" just don't care! lol!
Reply

Interesting article. I didn't though there was so much history behind the @ Hahaha!
Reply

I never knew until know from where @ comes! Thanks.
Reply

Nice "history", i never thought that "@" could have a nice story.
Reply

This is so cool..
We all have a little piece of history on our keyboards.
;D
Great article.
Reply

I enjoyed the article.
"@" came from "ae" (the a is surrounded by an e) which means "at each".
Think invoices.
Reply

Hmmm.. I loved these @ signs, didn't know that it came from "ae". I love the one from Garamond. And these colour palettes are also great.