Incredibly detailed and colorful bento art from Sakurako Kitsa (there is one from chotda as well). Not only are Sakurako's creations visually beautiful but the ingenuity used to create some of the aspects, like "pureed sweet potato piped through a ziplock bag" for the hair on a portrait bento, is great.

Here's a selection of Sakurako's bento art along with some Q & A from here flickr profile. 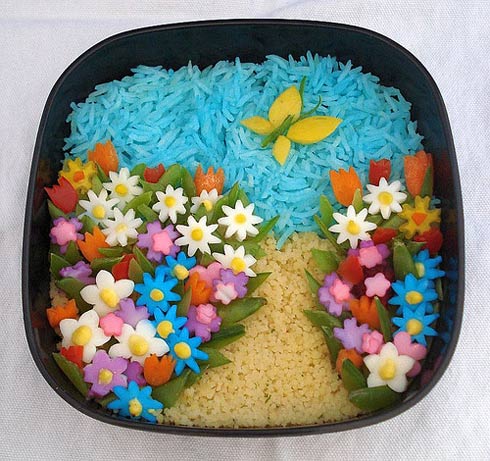 Some of your combinations don't look appetizing to me.

Every once in a while, I find something that would be perfect for the "picture" but might raise eyebrows palatewise (do palates have eyebrows?). I've gone ahead and used it, and eaten it, and I've found it's not that bad, not too different from items running together on a dinner plate. Of course, if you're one of those people who can't stand for your food items to touch each other at all, bento in general might not be your thing, unless you're really into cups and dividers. I've seen some wacky combinations in mainstream bento, too. 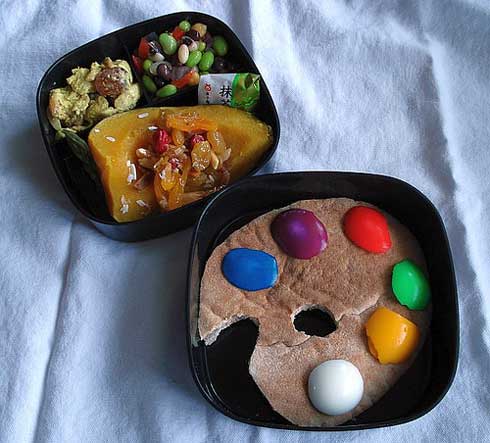 I think the weirdest combo I ever did were the puffs of cotton candy (aka fairy floss, aka sugar floss) on the turkey and rice in my Ichi the Killer bento. But nothing else would have worked the same way, and when it all comes down to it, it was just a small bit of sugar. I felt validated when Cat Cora (my favorite chef) topped a savory soup with cotton candy on Iron Chef America. The judges were weirded out at first, but then they tasted it, liked it, and declared it "fun". We're pioneers! 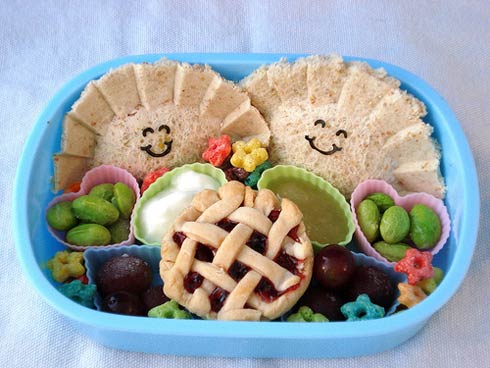 Do you actually eat these lunches?

Well, yes. I make them in the morning and take pics (usually), then stick them in the fridge and that's my lunch. 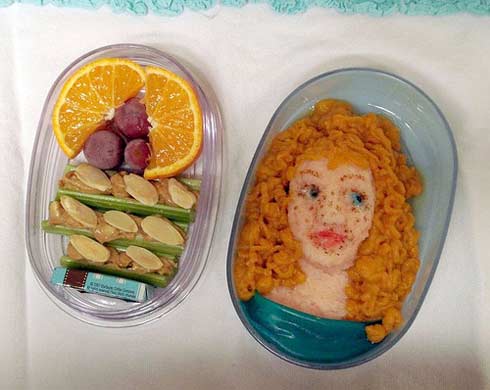 How did you get started doing this? Did your mom pack bento lunches for you as a child?

I've always done art here and there, so this is one more chance to be creative and make something cool. My packed lunches were pretty standard PB&J fare. In elementary school I had a rust-colored Tupperware lunchbox with a matching cup full of tea. In junior high I hid in the library instead of facing the lunchroom and all its social implications. In high school I ate with my art teacher.

I briefly took bento lunches to work, when I had a job in a hospital. I was just doing it to amuse myself, but I got worried that people would think I was doing it for attention, so I became self-conscious and stopped. I didn't begin again until years later, and I've gotten over worrying what anyone thinks of me. 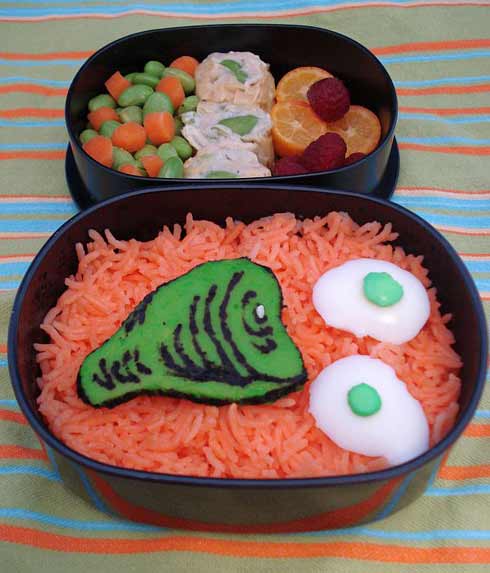 I don't think my child would eat your bentos.

The bentos I do are more art-friendly than kid-friendly. I'm sure that focus will shift a bit if I'm lucky enough to have more children, but for right now I just do pretty things that I'm willing to eat. For kid-friendly bento ideas, there are lots of bento blogs out there that have just what you're looking for. I can't recommend Biggie's "Lunch in a Box" highly enough. 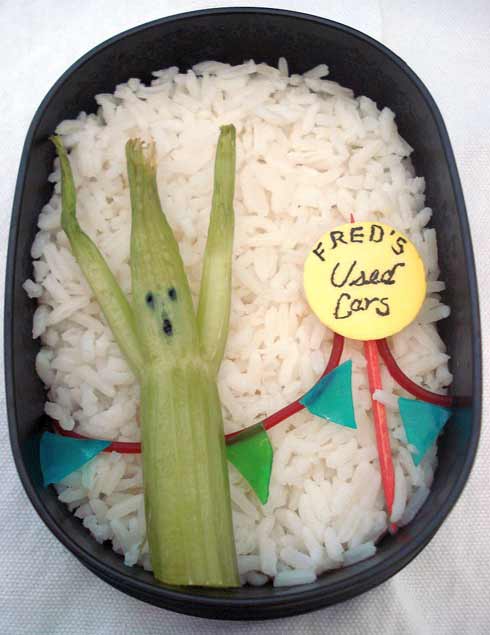 How long do your bentos take to make?

If I have a pretty solid idea in my head of what I want to do, not too long. If I have to boil rice or something, I try to start that in advance so it's done and cooled by the time I'm ready for it. Most of the elaborate ones in my flickr sets took about 45 minutes, start to finish, not counting rice. (Using leftover cooled rice is a great time-saver whenever it's possible). 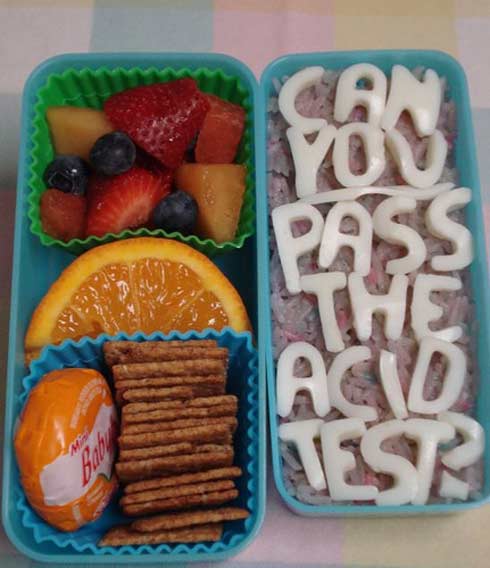 Yep. Online, bentos pop up in blogs and news stories here and there. I just had two on Gourmet magazine's website as a promotion for an upcoming book. I've also had things on Geeknews, CBC Radio's blog, and all kinds of other places. 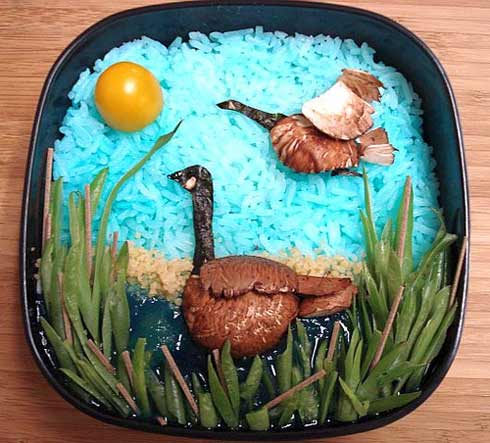 As far as magazines are concerned, I recently did a project for Anorak (the UK children's magazine) and (apparently) was in Greek Marie Claire with a full page of my silly mushroom geese. I also show up in domestic and international newspapers from time to time.

I've contributed to two books: three bentos are in Face Food by Christopher Salyers and many many more are in the upcoming 500 Bento Lunches, due out later this spring from Korero Books: http://www.amazon.com/500-Bento-Lunches-Recipes-Brilliant/dp/0955339855/ref=pd_bbs_sr_1?ie=UTF8&s=books&qid=1239831115&sr=8-1

I have a mini gallery on display at Giacomo's in Troy, OH and a larger gallery show this summer in Yellow Springs, OH. More info on the gallery show when I have more info to give. 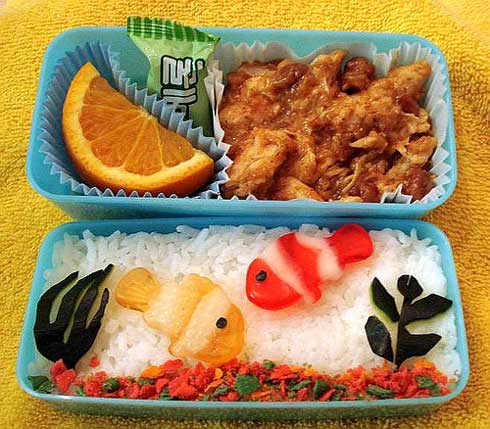 Where do you get your boxes?

If you look closely, a lot of them are cheapie food storage containers that I don't feel too weird about microwaving. Every once in a while I'll get something from jlist or ichibankan. Strangely enough, I haven't bought a new bento box in years (my dad gave me a picnic sized box, but I'm not counting that). When you've got a surplus of boxes, they have a way of flying out of cupboards at you. Also, I freak out about getting them clean enough and many spend too much time in the sink while I go through my OCD-loop of bleach-soaking and scrubbing. 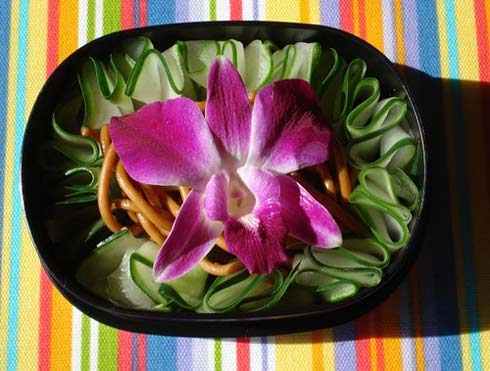 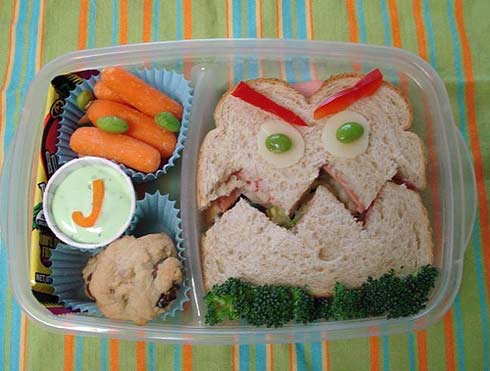 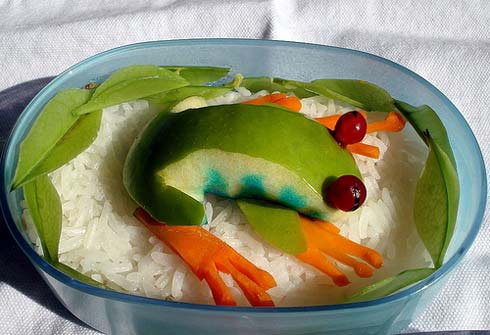 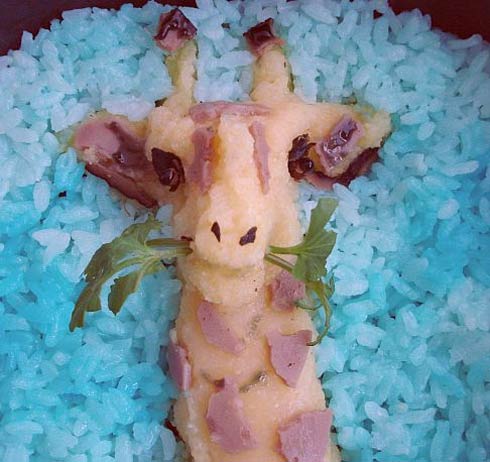 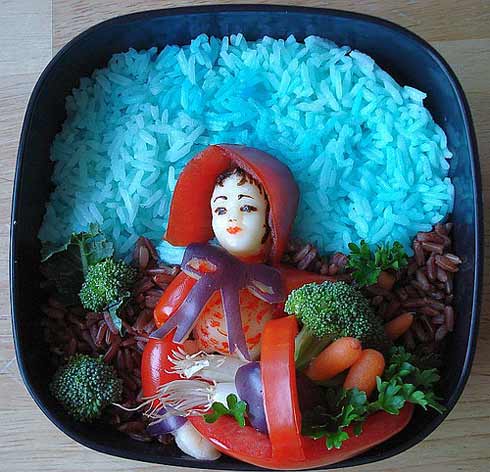 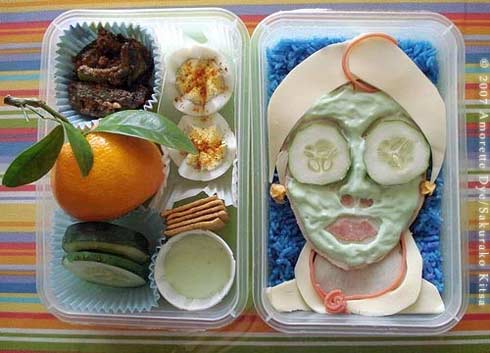 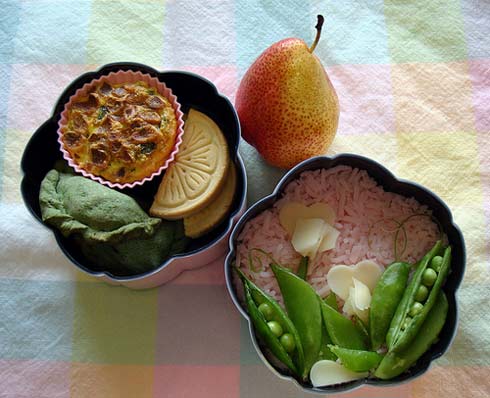 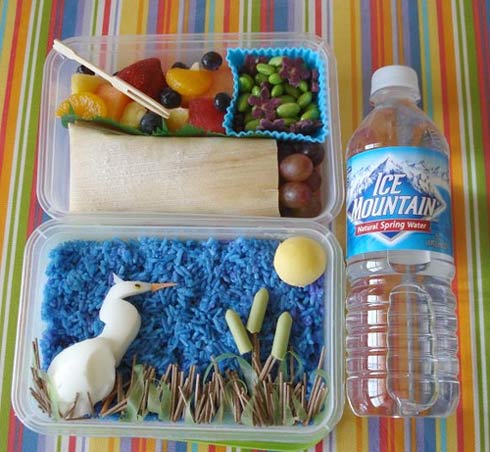 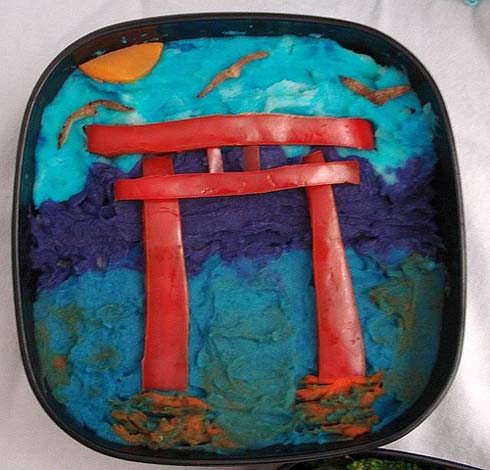 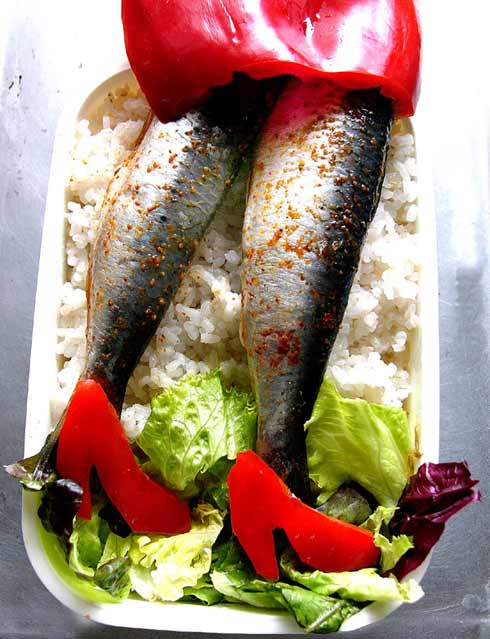 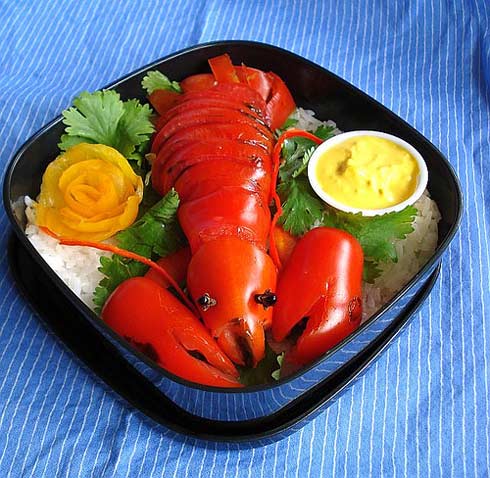 Um, Greg, I hate to break the bad news to you man, but you've got an advertisement attached to your comment. My condolences.

EDIT: Greg and his ad have been erased!

But RE: bentos, The peapods in the flower shaped container is gorgeous. The fish legs are terrifying!
Reply

Ha ... gives a whole new meaning to 'playing with your food!' Thanks.
Reply

that was amazing. the facial one is so meta, and the fish legs..wow
Reply

love this kind of stuff thank you
Reply

These are so neat! My favorites are The Angry Sandwich and, right below that, The Red-Eyed Frog. Thanks for blogging this.
Reply

I wish my mom made my lunch like that :D!