Diablo III, a game still in development by the American video game developer & publisher, Blizzard Entertainment, has grabbed our attention here at COLOURlovers due to the controversy over its new color palette. It seems that the game's developer's, and more specifically, the art director's, decision to depart from the familiar palette of Diablo II to a more experimental one has angered many of the fans of the series. So much, in fact, that some of them started a petition to express their disappointment, even going as far as creating there own images as to what they would like the game to look like (image comparisons below).  This controversy has sparked interest not only about the new color choices but also the responsibility creatives have to keep things aesthetically the same in a series, and to their fans input.

The palettes of the previous two titles in the Diblo series featured "dark, shadowy landscapes and dungeons (in which the player-characters needed a radius of light to see), and an overall realistic art style. With “Diablo III,” the environments and textures are noticeably more vibrant and colorful, both inside and outside dungeons. Blaming the influence of “World of Warcraft,” the petitioners complain that the game is too “cartoon’ish” with “unrealistic elements” and “outside scenarios with vivid colors, beautiful forests with colorful vegetation, shinny [sic] and beautiful waterfalls where even rainbows take place.” (The petitioners have a full laundry list of complaints and suggestions here.)" 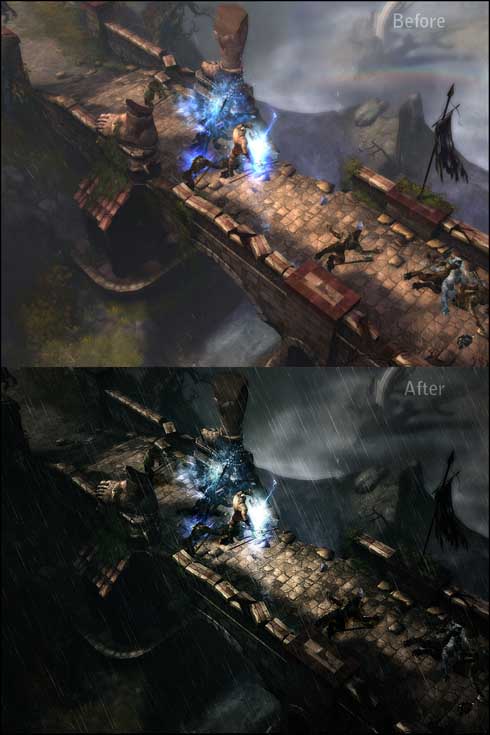 So this is what Lee had to say about the art direction when we spoke in Paris: “One of the things that we considered when we were working on the visuals for ‘Diablo III’ is the fact that color is your friend. We feel that color actually helps to create a lot of highlights in the game so that there is contrast. A great analogy is like in ‘Lord of the Rings’ — not everything is dark. It allows you to see what a creepy dungeon can be like but if everything is dark it doesn’t allow you to have a lot of contrast.”

He continued: “‘Diablo I’ and ‘Diablo II’ are darker, and I think that the one of the main reasons why is the fact that in ‘Diablo I,’ you’re basically in a dungeon the whole time. And in contrast to ‘Diablo III,’ you’ll be exploring outdoors, you’ll be in dungeons, you’ll be experiencing so many different areas. We want to bring as much variety as we can when you’re playing the game so that you’re excited to check out new environments. We don’t want everything to look the same and that’s really what we’re trying to aim for. 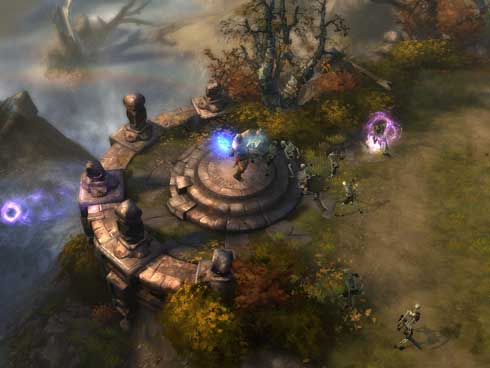 At the same time as some fans were screaming about the changes, others started their own petition applauding the new direction for the very same reason.

The efforts of those opposed may have been too late; after around 52,000 signatures had been added to the petition Blizzard's lead designer, Jay Wilson announced that the new colors were here to stay, as he explained to fans that "In terms of tone, they will find the game as dark as any of the previous ones and in some ways darker. And I think that’s probably, hopefully, enough to satisfy them. I think the vast majority of our fans like the new art style and when they play it and they actually see the influence it has on gameplay, I think a lot of people who don’t like it will turn around. Not all of them, and that’s fine. We know that we can’t satisfy everybody.”

In another motion to put the drama to rest, popular gaming critic and editor-in-chief of G4TV, Adam Sessler talks to angry fans and urges them to keep things in perspective.

And for what could possibly be the final say on the controversy Bizzard posted Diablo III themed shots featuring colorful rainbows propelled from the butt of a unicorn; the running joke throughout the drama was that Diabo III was going to be 'all about rainbows and unicorns'. 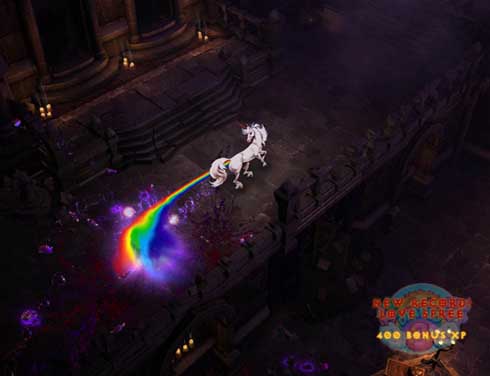 I'd like to let the comment section be open to any gamers, certainly, but also anyone who has an opinion on a creatives responsibility, if any, to their fans.

Very interesting. I was always a huge fan of both Diablo I and II, and although I can see why so many people could be upset at this change, I think it'll be interesting to see. In my eyes, I will probably see it as more different than the other two because of this large of a change. But I doubt it could ever ruin the game for me! We'll just have to see, I guess.
Reply

I know of a couple people who'd be outraged at the new schematic, but I think it'll have to go through the perils of testing and then commercial sales to see what the players REALLY think. I dunno, I'm not into these sorts of games; the photo of the new shot and then with the photoshopped one makes me like the photoshopped one better, but I've never personally played the games myself to see. I think it's just going to take some time to see which is better. And if this one 'absolutely sucks', they'll make a new one. Not like it's the end of the world.
Reply

I like that Blizzard is using more color. The problem I always have in these games is in differentiating between objects, ESPECIALLY in dungeons.

I think creatives have a thin tightrope to walk. On the one hand, anyone working on a series has the responsibility to keep an overall continuity going. However, they also need to be ready to make changes to keep it fresh and make interesting improvements. I think it's a good move using more color, but they do seem to have gone a bit to the side of the artistic style with the painterly look to the scenery.