You might remember this festival from our post about it last year... and the Harbin Snow and Ice Festival is just as colorful this year as it is every year.

The Harbin Snow & Ice Festival is an annual event which takes place in one of China's coldest cities (temperatures in the winter can reach and surpass negative 35 Celsius or so). Every year over a 100,000 Tons of Ice Blocks are cut from the Song Hua River and used by the hundreds of international sculptors & carvers from January till the end of February. It' s one of the largest festivals of its kind, and at night the ice lanterns make the magnificent ice structures come alive with color. 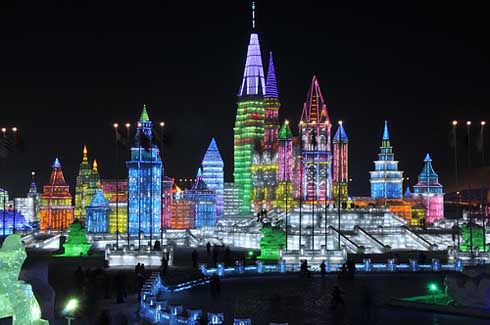 Officially, the festival starts from January 5th and it lasts one month. However often the exhibitions open earlier and last longer, weather permitting. Ice sculpture decoration ranges from the modern technology of lasers to traditional ice lanterns. 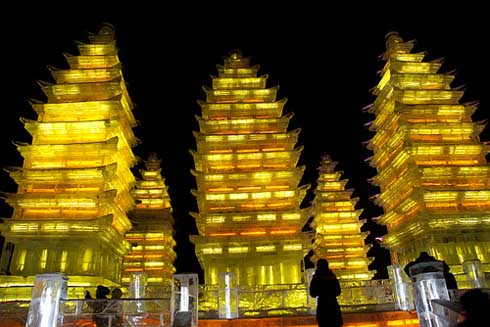 The Derivation Of The Ice Lantern

The first Ice lanterns were a winter-time tradition in northeast China during the Qing Dynasty（1644 - 1911), the local peasants and fishermen often made and used ice lanterns as jack lights during the winter months. At that time these were made simply by pouring water into a bucket that was then put out in the open to freeze. It was then gently warmed before the water froze completely so that the bucket-shaped ice could be pulled out. A hole was chiseled in the top and the water remaining inside poured out creating a hollow vessel. A candle was then placed inside resulting in a windproof lantern that gained great popularity in the region around Harbin. 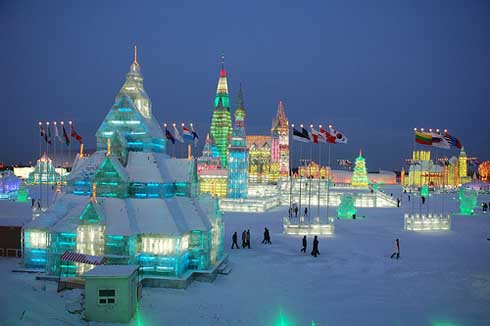 From then on, people made ice lanterns and put them outside their houses or gave them to children to play with during some of the traditional festivals. Thus the ice lantern began its long history of development. With novel changes and immense advancement in techniques, today we can marvel at the various delicate and artistic ice lanterns on display. 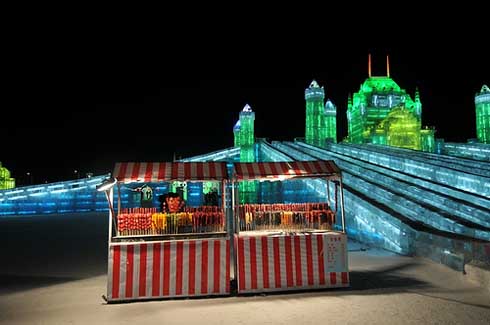 For the Harbin Ice Festival, the ice lanterns are created using ice and snow as raw material and the festival combines ice artworks with colored lights and splendid music. The artworks include ice and snow sculptures, ice flowers, ice architecture and so on. 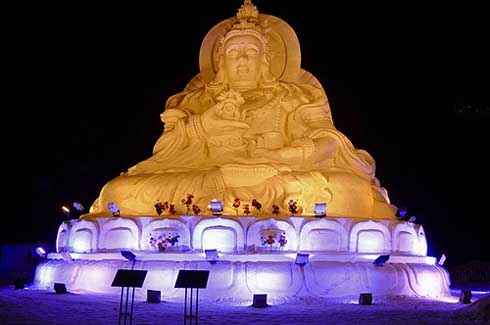 Each year, visitors to the Harbin Ice Festival are treated to a whole new world of ice and snow. The best collections of ice artworks are exhibited in three main places: the Sun Island Park, Harbin Ice and Snow World, and Zhaolin Park. - China Travel Guide 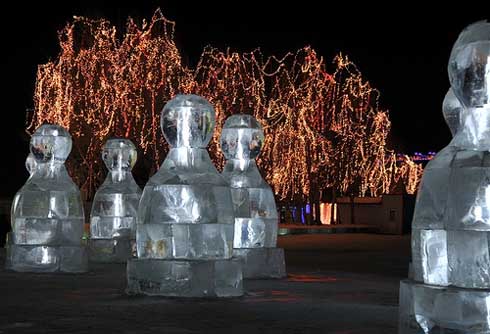 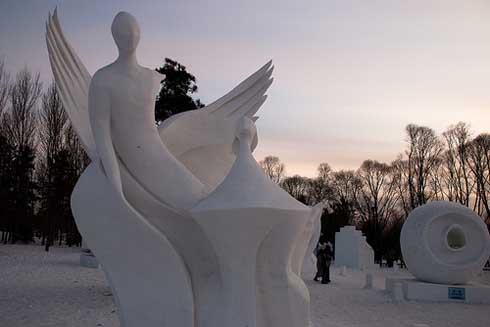 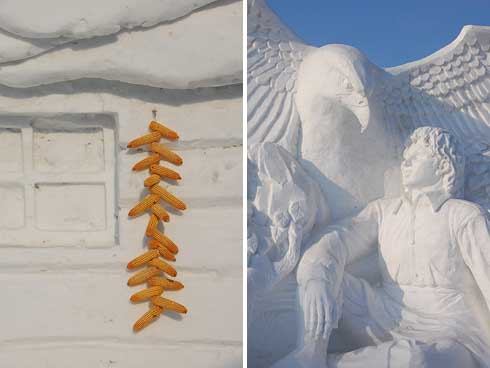 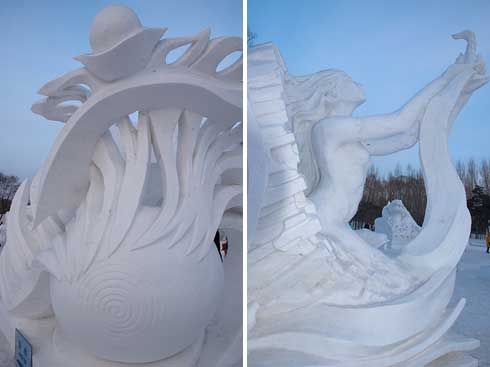 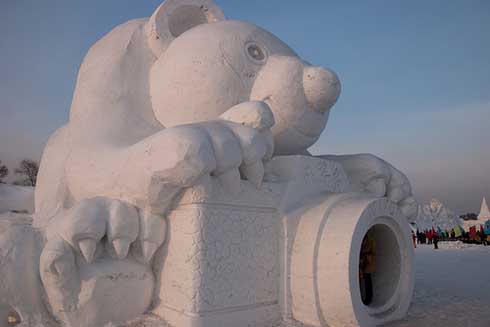 More Images from the 2009 Festival 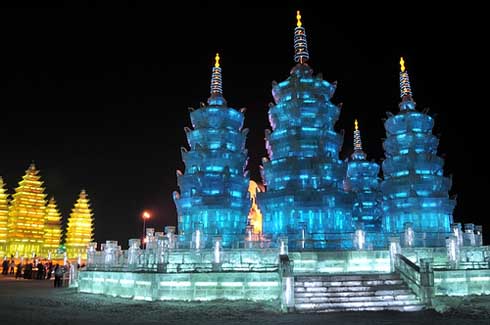 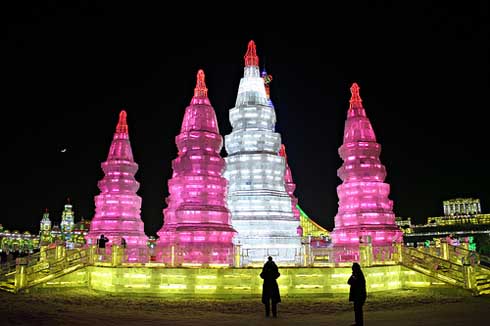 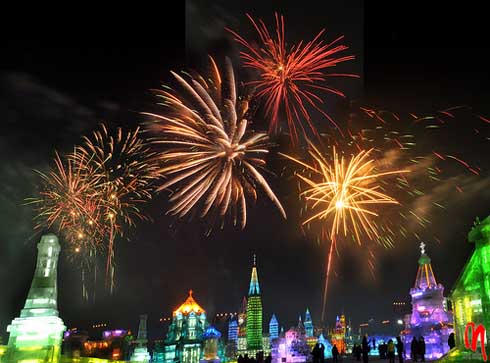 If you want to see more check out this great photo series over at boston.com.

i don't think the bear should have claws. :D it's a wicked post, though!
Reply

Gosh it is so amazing.. since it doesnt snow in the place i stay, its all the more awe inspiring!
amazing to see colours on ice!
Reply

I live in China! Not in Harbin, but I have a lot of friends there. Nice to see a post about things over in this hemisphere. China is one of the most randomly colorful places you could ever be. I guess that's true of most of Asia.
Reply

Thanks for using (and linking back to) some of my photos! :)
The Harbin Snow and Ice Festival is indeed incredible. Definitely worth the trip in spite of the crazy temperatures...
Beautiful website and blog by the way
Reply

Fantastically magical and beautiful! It is always so inspiring to see what is made from the most humblest of materials! Especially when the longevity of the work is of no consequence. True labors of love ....
Reply

Wooow :O
What a Beautiful festival :D Where and when is this?
I'll visit it someday... ;)
Reply

Ice sculptures always impress, but those take it to a whole new level. I've never seen or heard of ice sculptures that large and detailed. The artists involved there have some real talent and dedication to their craft.