Albert Henry Munsell was an American painter and teacher of art. As a painter he was noted for seascapes and portraits but he is most well known for an early attempt at creating an accurate system for numerically describing colors, now known as the Munsell Color System. His research began in 1898 with the creation of his color sphere, or tree, and came into light with the publication of A Color Notation, in 1905. 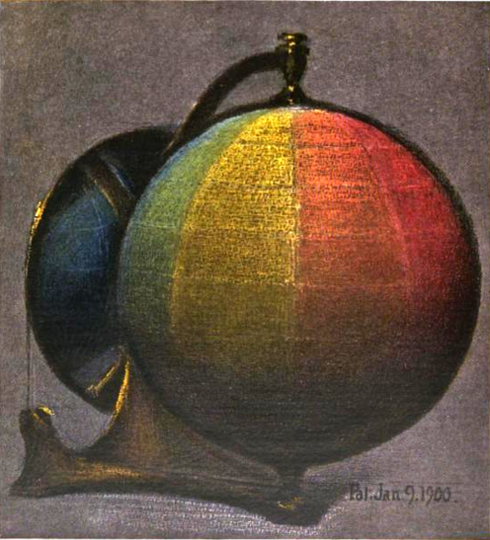 The system specifies color using three dimensions, hue (a specific color), value (lightness and darkness), and chroma (color intensity). Several earlier color order systems had placed colors into a three dimensional color solid of one form or another, but Munsell was the first to separate hue, value, and chroma into perceptually uniform and independent dimensions, and was the first to systematically illustrate the colors in three dimensional space. Munsell’s system, and particularly the later renotations, is based on rigorous measurements of human subjects’ visual responses to color, putting it on a firm experimental scientific basis. Because of this basis in human visual perception, Munsell’s system has outlasted its contemporary color models, and though it has been superseded for some uses by models such as CIELAB (L*a*b*) and CIECAM02, it is still in wide use today.

The system consists of three independent dimensions which can be represented cylindrically in three dimensions as an irregular color solid: hue, measured by degrees around horizontal circles; chroma, measured radially outward from the neutral (gray) vertical axis; and value, measured vertically from 0 (black) to 10 (white). Munsell determined the spacing of colors along these dimensions by taking measurements of human visual responses. In each dimension, Munsell colors are as close to perceptually uniform as he could make them, which makes the resulting shape quite irregular. As Munsell explains:

Desire to fit a chosen contour, such as the pyramid, cone, cylinder or cube, coupled with a lack of proper tests, has led to many distorted statements of color relations, and it becomes evident, when physical measurement of pigment values and chromas is studied, that no regular contour will serve. — Albert H. Munsell, "A Pigment COlor System and Notation" 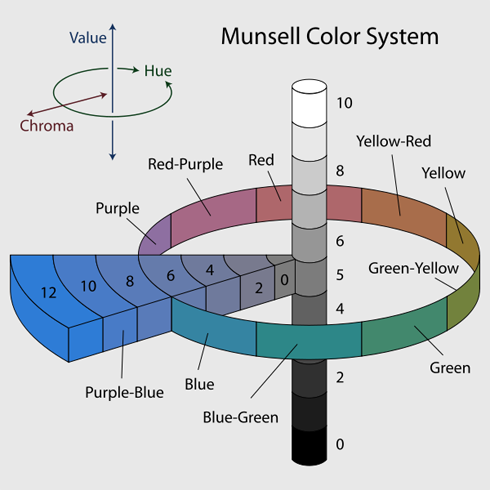 Each horizontal circle Munsell divided into five principal hues: Red, Yellow, Green, Blue, and Purple, along with 5 intermediate hues halfway between adjacent principal hues. Each of these 10 steps is then broken into 10 sub-steps, so that 100 hues are given integer values. Two colors of equal value and chroma, on opposite sides of a hue circle, are complementary colors, and mix additively to the neutral gray of the same value. The diagram below shows 40 evenly-spaced Munsell hues, with complements vertically aligned.

Value, or lightness, varies vertically along the color solid, from black (value 0) at the bottom, to white (value 10) at the top. Neutral grays lie along the vertical axis between black and white.

Several color solids before Munsell’s plotted luminosity from black on the bottom to white on the top, with a gray gradient between them, but these systems neglected to keep perceptual lightness constant across horizontal slices. Instead, they plotted fully-saturated yellow (light), and fully saturated blue and purple (dark) along the equator.

Chroma, measured radially from the center of each slice, represents the “purity” of a color, with lower chroma being less pure (more washed out, as in pastels). Note that there is no intrinsic upper limit to chroma. Different areas of the color space have different maximal chroma coordinates. For instance light yellow colors have considerably more potential chroma than light purples, due to the nature of the eye and the physics of color stimuli. This led to a wide range of possible chroma levels—up to the high 30s for some hue–value combinations (though it is difficult or impossible to make physical objects in colors of such high chromas, and they cannot be reproduced on current computer displays). 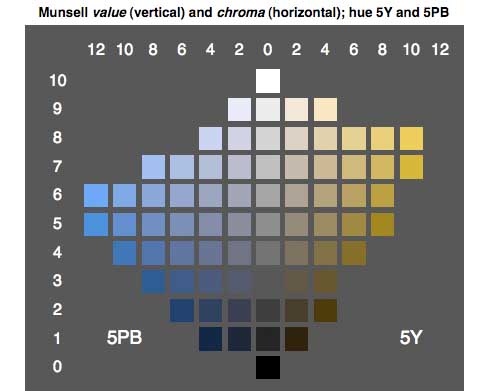 If you want to read more about the Munsell Color system check out these books:

The Munsell Color System: A Practical Description with Suggestions for its Use, by T.M. Cleland

Text and images from wikipedia. If you can, please donate to Wikipedia and help provide "everyone in the world with free access to the sum of all human knowledge."

god, i had to learn this for class - and it wasn't even a color class! i mean, yes, it's cool, but must we learn EVERY color in it and then copy it piece by piece?! ridiculous...
Reply

i really liked..i actually learned something i like for once!!
Reply

Great, - never heard about Munsell and his color system! Thanks for posting this article.
Reply

Wow, this is a great blog entry! I have the Cleland version at home in my collection of his work. Brilliant!