The Colors of Christmas: Why Santa Wears Red

Why does Santa wear red?

Believe it or not, present-day Santa owes his red robe not to an ancient legend or to an early myth but to the Coca Cola Company.

A long time ago Father Christmas was shown in clothes of different colours: green, purple, light-blue, navy blue, brown or red. Some illustrations even depict him as a multicolour figure wearing blue trousers, a yellow waistcoat and a red jacket. In some cases he even wore brown, black or white furs.

On his head he used to have a mistletoe crown, a hat, a nightcap, a bishop’s mitre or a hood. Other versions showed him holding a glass of wine or smoking a clay pipe. As he was believed to go down the chimney of houses on Christmas Eve, soot stained his clothes.

Everything changed around 1930. Coca-Cola decided to use the image of Santa Claus in its winter advertising campaign and took on an American artist called Haddon Sundblom. Sundblom chose the official Cocal Cola colours -red and white- and designed a loose tunic fastened by a tight black belt. When Sundblom’s campaign was over, Santa’s image in a red robe had become popular all over the world. 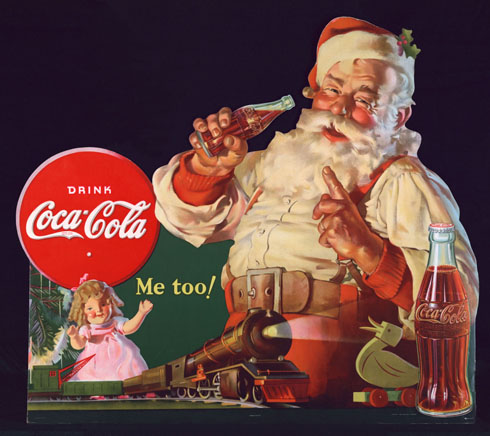 It might seem disturbing to some people the fact that Santa should be dressed in the same colours that characterize...(scramble the letters) Satan! Anyway, during the Depression of the thirties, Sundblom’s Santa offered just what people needed at that critical time: a most welcome display of warmth and generosity. 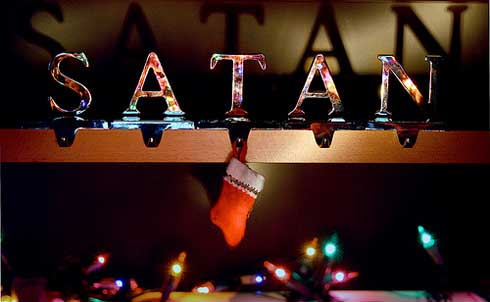 from the editor: Additional Influences Behind Santa's Red

Thanks to our wonderful contributor Cristina we know one reason why Santa wears red, but the Coca-Cola Companies mighty advertising power isn't the only reason. Here are a few more explanations:

In the New York Times a standardized Santa article including the "red suit" appears before Sundlom's illustrations:

From the Coca-Cola Company:

Most people can agree on what Santa Claus looks like — jolly, with a red suit and a white beard. But he did not always look that way, and Coca-Cola advertising actually helped shape this modern-day image of Santa.

2006 marks the 75th anniversary of the famous Coca-Cola Santa Claus. Starting in 1931, magazine ads for Coca-Cola featured St. Nick as a kind, jolly man in a red suit. Because magazines were so widely viewed, and because this image of Santa appeared for more than three decades, the image of Santa most people have today is largely based on our advertising.

This (coca-cola) legend is not true. Although some versions of the Santa Claus figure still had him attired in various colors of outfits past the beginning of the 20th century, the jolly, ruddy, sack-carrying Santa with a red suit and flowing white whiskers had become the standard image of Santa Claus by the 1920s, several years before Sundlom drew his first Santa illustration for Coca-Cola. As The New York Times reported on 27 November 1927: “A standardized Santa Claus appears to New York children. Height, weight, stature are almost exactly standardized, as are the red garments, the hood and the white whiskers. The pack full of toys, ruddy cheeks and nose, bushy eyebrows and a jolly, paunchy effect are also inevitable parts of the requisite make-up.” … All this isn’t to say that Coca-Cola didn’t have anything to do with cementing that image of Santa Claus in the public consciousness. The Santa image may have been standardized before Coca-Cola adopted it for their advertisements, but Coca-Cola had a great deal to do with establishing Santa Claus as a ubiquitous Christmas figure in America at a time when the holiday was still making the transition from a religious observance to a largely secular and highly commercial celebration.

Yet another explanation from the book Why Does Santa Wear Red? ...and 100 Other Christmas Curiosities Unwrapped: 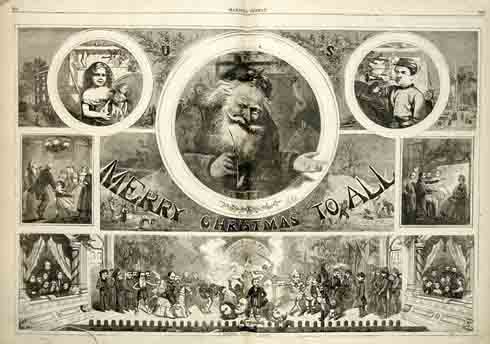 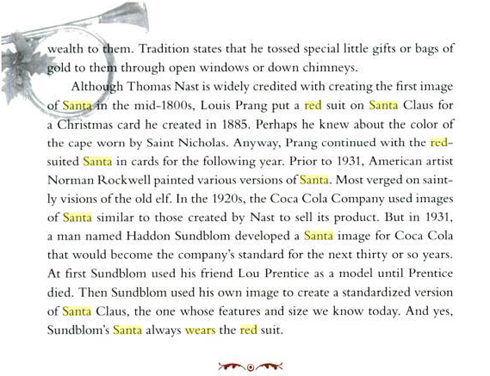 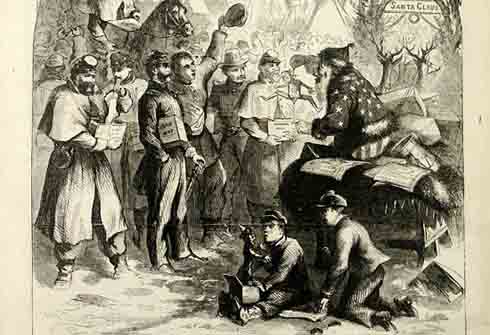 Early Illutration by Thomas Nast with Santa lynching Jefferson Davis. As my source says: "Perhaps most interesting about this print is the special gift in Santa's hand. Santa is holding a dancing puppet of none-other-than Jefferson Davis, President of the Confederate States of America. The likeness to Jefferson Davis is unmistakable. Even more interesting, Davis appears to have the string tied around his neck, so Santa appears to by Lynching Jefferson Davis! This is a classic Thomas Nast illustration. This is Nast's first published picture of Santa Claus, and we can see many of our present images of Santa demonstrated in this Civil War illustration."

www.freewebs.com/rock_n_literature/Cristina is a discourse analysis researcher and a teacher trainer at the teacher training college. She is currently teaching contemporary History and Literature and English teaching methodology. She has also taught advanced technical English at Kennedy University in Buenos Aires, Argentina. Since 2008 she has been making colour-inspired contributions to this blog as a way to share her love for colour and design.

I had absolutely no idea this was the truth behind santa! i literally always thought he wore red. and it's funny because i hate coke.

oh, the best video of me was from christmas when i was a little kid, when i spelled SATAN out of these little blocks we have that are supposed to spell SANTA. hey, i was a kid, and i thought the vowels went in the middle! ^^;;;; lol, santa hating someone that bad? sheesh, yaay for the civil war!

great post, and i hope you put more about holiday myths and facts! this is really interesting, thanks!
Reply

beautiful post! I always wondered why santa wore red. Thanks!