Long before the United States was red, white and blue there was a whole different palette of colors that represented these great hills, plains and valleys. All across North America the culturally rich tribes of the American Indians lived to keep the upper world of the sky and lower world of the water in balance, and color was an important part of their art and design which is deep with symbolism of complex philosophical ideas. 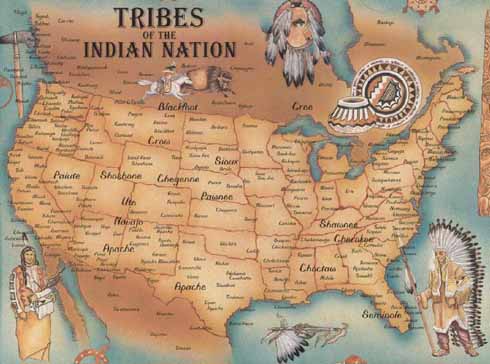 Image from Little Green Dragon; As of 2000, the largest tribes in the U.S. by population were Navajo, Cherokee, Choctaw, Sioux, Chippewa, Apache, Blackfeet, Iroquois, and Pueblo.

Color was important to add meaning to a design. Most Native Americans named four points of the earth, the four directions of the compass--north, south, east, and west--and assigned a color to each one. Among the Cherokee, north was blue, south was white, east was red, and west was black. Colors could also mean life or death, war or peace, female or male, night or day. For example, the Navaho thought black represented men and blue, women. The Hopi thought that the color blue was the most sacred and used it to honor their gods. Here are some of the other meanings attached to colors:

Native Americans added color and designs with paint, beads, quill embroidery, and by carving and weaving. Sometimes a design or color was a symbol, that is, it stood for an idea or told a story. For example, among the Crow, the color black was a symbol for victory; arrow symbols might mean a hunt or a battle. 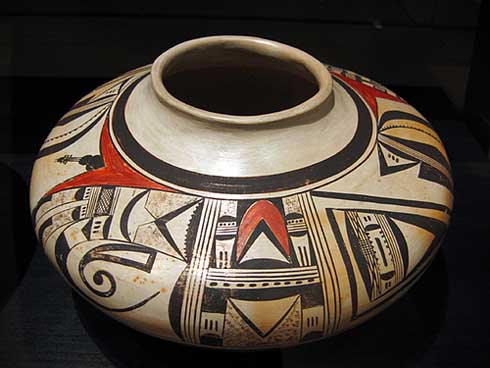 Each group had its own set of meanings for colors and designs to use on ceremonial crafts. These symbols could be drawn on a leather pouch or a drumskin to retell a myth or relate an important event Sometimes the maker of a ghost shirt or some other ceremonial object had a dream that revealed what design to use. Designs that showed people, birds, and animals were usually created by men. Women worked more with geometric shapes. 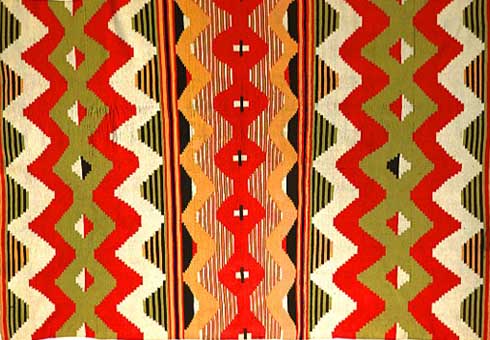 This blanket was purchased from a Navajo woman by Captain Harrison Samuel Weeks in 1876 while he was stationed at Fort Union, New Mexico. It was meant to be worn around the shoulders with the large central panel falling vertically down the back. During the 19th century the introduction of new commercial dyes and yarns and the growth of a tourist market spurred by the opening of trading posts sparked creative experimentation with color and complex designs.

Header image from the Detroit Institute of Arts

www.colourlovers.comDavid Sommers has been loving color as COLOURlovers' Blog Editor-in-Chief for the past two years. When he's not neck deep in a rainbow he's loving other things with The Post Family (http://thepostfamily.com/), a Chicago-based art blog, artist collective & gallery.
8 Comments
Showing 1 - 8 of 8 Comments
Reply

We have the chumash in my area. It's cool, I met one.
Reply

I live close to the Seneca Reservation. I fill my gas tank there all the time.
Reply

Simply fascinating, thanks for this article.
Reply

It's funny, i was watching something on the history channel about (i don't remember the name, sorry!) some Indians, and they aren't on the map. I know they fought with they Apache all the time, so they're from the south, southwest. regardless, this is wicked cool. it really annoys me the europeans came in and destroyed practically everything. i won't go on with that, because i'll ramble. but this is still really awesome, thanks.
Reply