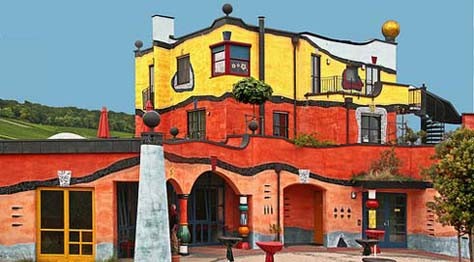 Friedensreich Hundertwasser was an Austrian painter, architect and sculptor. Born in Vienna, he became one of the best-known contemporary Austrian artists, although controversial, by the end of the 20th century.

Hundertwasser's original and unruly artistic vision expressed itself in pictorial art, environmentalism, philosophy, and design of facades, postage stamps, flags, and clothing (among other areas). The common themes in his work utilized bright colors, organic forms, a reconciliation of humans with nature, and a strong individualism, rejecting straight lines. He remains sui generis, although his architectural work is comparable to Antoni Gaudí in its biomorphic forms and use of tile. He was inspired by the works of Egon Schiele from an early date, and his style was often compared to that of Gustav Klimt. He was fascinated with spirals, and called straight lines "the devil's tools". He called his theory of art "transautomatism", based on Surrealist automatism, but focusing on the experience of the viewer, rather than the artist. 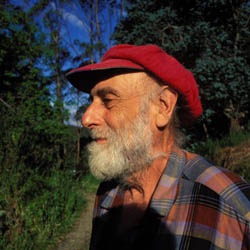 Although Hundertwasser first achieved notoriety for his boldly-colored paintings, he is more widely renowned today for his revolutionary architectural designs, which incorporate natural features of the landscape, and use of irregular forms in his building design. Hundertwasserhaus, a low-income apartment block in Vienna, features undulating floors ("an uneven floor is a melody to the feet"), a roof covered with earth and grass, and large trees growing from inside the rooms, with limbs extending from windows. He took no payment for the design of Hundertwasserhaus, declaring that it was worth it, to "prevent something ugly from going up in its place".

He felt that standard architecture could not be called art, and declared that the design of any building should be influenced by the aesthetics of its eventual tenants. Hundertwasser was also known for his performance art, in which he would, for instance, appear in public in the nude promoting an ecologically friendly flush-less toilet. 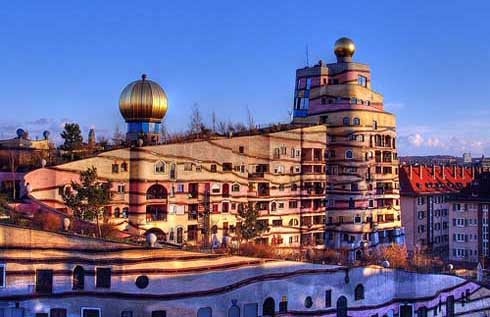 Waldspirale (wooded spiral in english) which is colorfully painted with earth tones, is located in Darmstadt, Germany and was built in the 90's. It features 105 units, a green roof, an inner courtyard and playground, small artificial lake, 1000 unique windows and unique handles on every door. 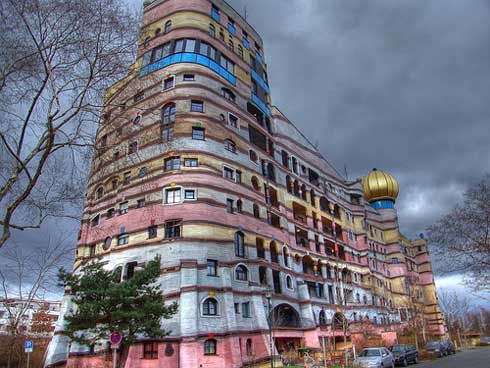 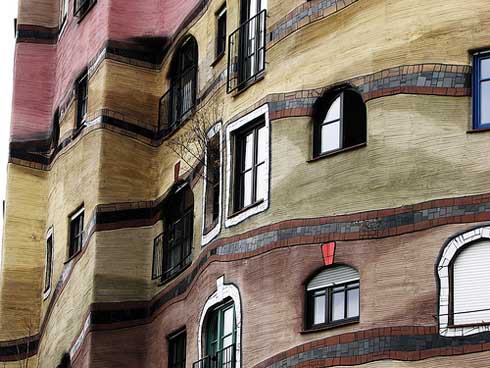 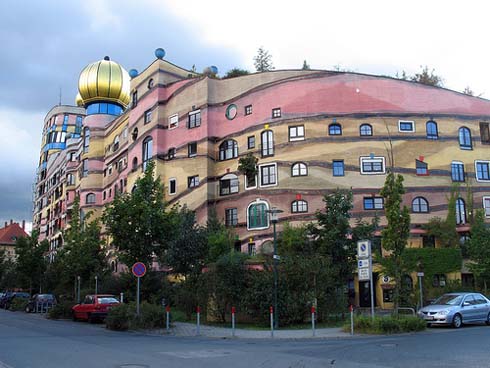 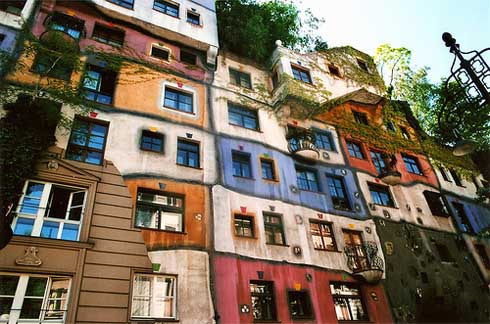 The Vienna house features undulating floors, a roof covered with earth and grass, and large trees growing from inside the rooms, with limbs extending from windows. Hundertwasser took no payment for the design of the house, declaring that it was worth it, to prevent something ugly from going up in its place.

Within the house there are 52 apartments, four offices, 16 private terraces and three communal terraces, and a total of 250 trees and bushes. The Hundertwasser House is one of Austria's most visited buildings and has become part of Austria's cultural heritage 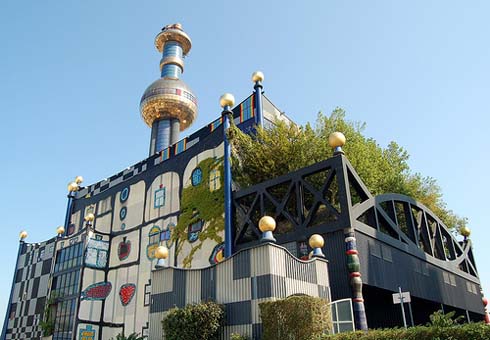 Being an environmentalist, Friedensreich originally refused the offer to redesign the exteroir of the Spittelau district heating plant, but when it was promised that the plant would be equipped with the most modern emission-purification technology, and that 60000 apartments would be heated whose emissions would otherwise be a further source of pollution, Hundertwasser agreed to do the design. 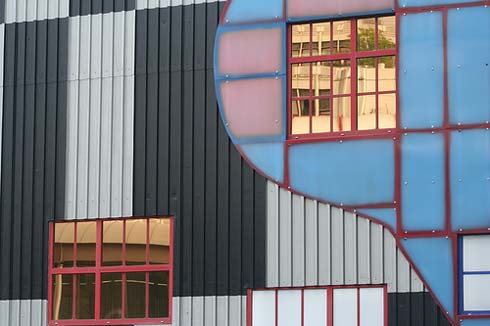 Photo by dugspr — Jetzt in Wien 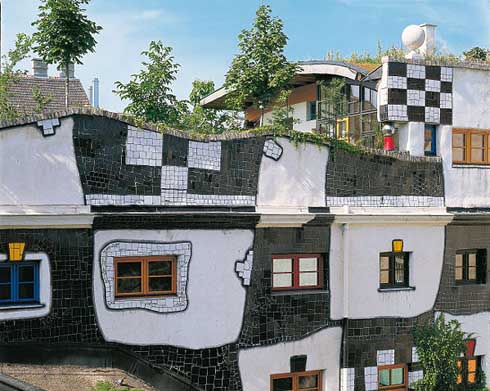 The Kunst Haus Wein houses a permanent collection of his own work along with changing contemporary exhibitions. 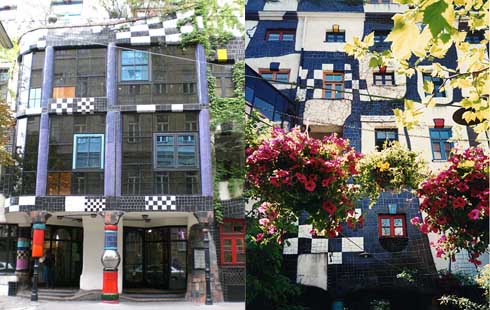 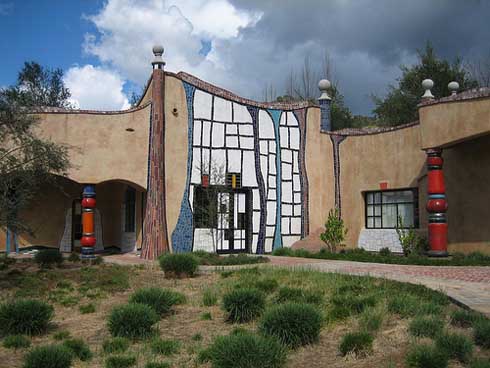 Located in the Nappa Valley, the Quixote Winery is Friedensreich only U.S. building. 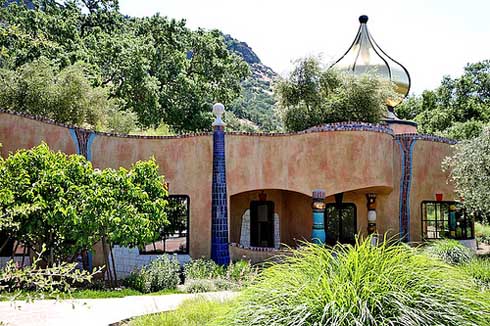 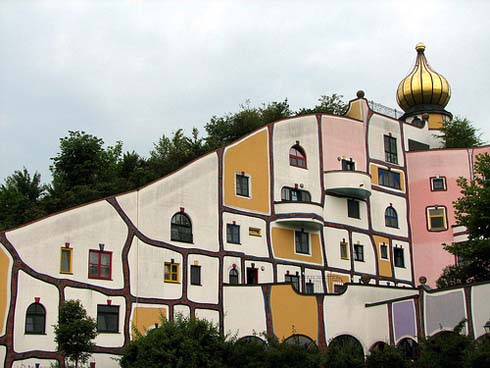 The Rogner Bad Blumua Hotel located in Styria, Austria. "Green roofs, round shapes, colouful facades and golden domes make up a spirited work of art in the middle of fields and madows." 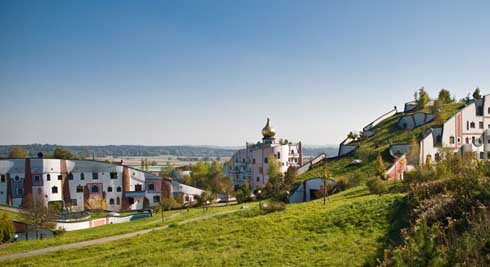 The Green Citadel of Magdeburg 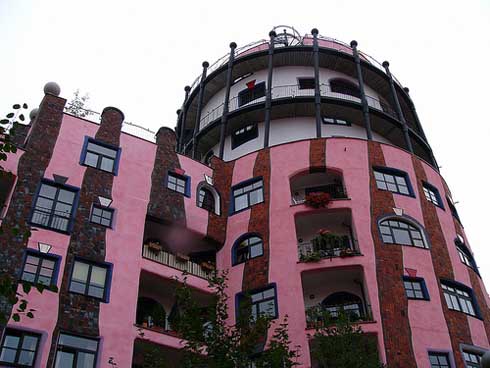 One of the worldwide latest and greatest masterpieces of architecture by Friedensreich Hundertwasser, golden globes shine atop its towers, "tree tenants" look out of "dancing windows", scents waft from the wildflower meadows on the roofs, and "feet’s melodies" carry people through the courtyards. 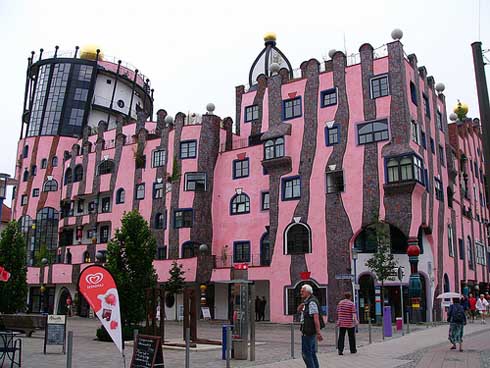 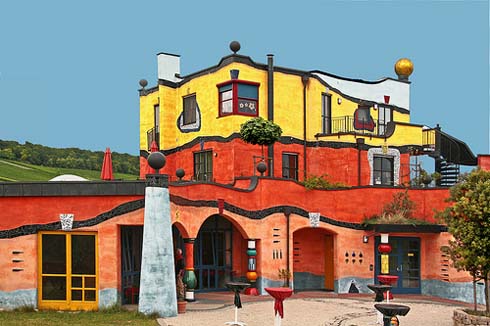 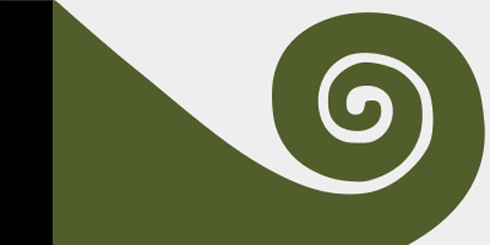 The Koru Flag has been proposed as a secondary flag for New Zealand. It was designed by Friedensreich Hundertwasser in 1983. It is claimed by some New Zealanders that the current flag of New Zealand is a reminder of British colonialism and does not truly represent their culture, however those who support the current flag say that it represents the history of the country as a part of the British Empire and location in the southern hemisphere.

As black is a traditional colour of the Māori, the flag has a black flagstaff on the left. There is a fern green spiral which starts by taking up the entire width of the flag but decreases gradually, splitting it diagonally and finally curling up into a spiral on the right side. This curling fern is based on a Māori pattern known as the koru, and the corresponding white spiral alludes to Aotearoa, a Māori name for New Zealand meaning Land of the Long White Cloud.

Hundertwasser also saw the design as representing humanity in harmony with nature.

Hey artist, get a real job!
Posted in Art, Articles, CHANNEL-DIGITAL-ART, Inspiration
What to pack for your summer holiday
Posted in __PRIMARY-CHANNELS, Articles, Design, News
20 Comments
Showing 1 - 20 of 20 Comments
Reply

I know that although the structures are completely perfect and symmetrical and whatnot, but the colorings make them look like they're totally screwed up. It's amazing how cool these things look.
Reply

This is great, the colours are so pretty.
Reply

Great article, personally I am not a big fan of Hundertwasser but I can see why people like him. If anything I would see his work more as a challenge of conventional architecture and as such it is not very practical but perhaps inspiring to some.

In regards to the alternative flag: Living in New Zealand myself, I find it absolute ridiculous to brand this country through the Maori. They make up ~10% of the population so why should their symbolism be more dominant than the western influence? It's not like the US has some bizarre flag that is based on native indian ancestory...
That said, the design of the flag is indeed quite appealing.
Reply

I had no idea about Friedensreich Hundertwasser's work!
I love it! Amazing design in architecture and the use of colors, material and nature =)
Hope one day I can get to see some of his work for real.

Maybe a better question is why do they make up just ~10% of your population, and why after all of the decimation are you opposed to even letting them choose the flag
Reply

Absolutely love Hundertsasser's style! The organic lines are a relief from the rigidity of most architecture. The tile work is gorgeous and puts me in mind of Gaudi's marvelous Guell Plaza in Barcelona.

With undulating floors, 1000 different windows and wacky door handles, it sounds like living in a fun house.
Reply

these are like, awesome! it's really cool how bold he is in using these colors on the exterior... awesome!
Reply

Wow ..Holy s****!! This guy should design villages for trippy fairy tale movies! HE IS AWESOME!

His work looks organic. Like water on paper. It has those nature made lines and flow.

awesome ya man thank you
Reply

Does anyone have a ColourLovers PS palette for him?
Reply

Love the colors he used. Love the creativity. Love the forms. It's all good.
Reply

The shape, colors and textures are very interesting, I do not know if it is internally the same way, but outside is very funny (acentuantes in bright colors and contrast).
Reply

I'm late coming to this article, but thank you for introducing me to Hundertwasser. I've always loved Gaudi's undulating lines and this guy works the same, organic aesthetic. Wish I could live in one of his buildings!
Reply