Inspiration can be found everywhere we look, and if you happen to have been staring at a candle last night you might have been inspired by the intriguing colors of a flame.

The color and temperature of a flame are dependent on the type of fuel and amount of soot present in the combustion. A red flame is the coolest part, then as the temperature rises it changes to orange, yellow, and finally to white, being the hottest part. A blue flame will appear if the concentration of oxygen is high enough and creates enough energy to excite and ionize gas molecules in the flame. It can be seen near the base of candles where airborne soot is less concentrated. 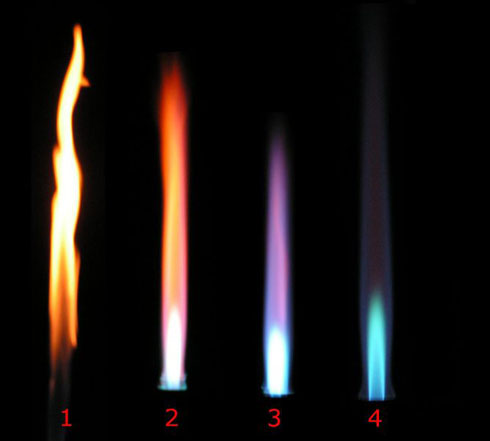 Different flame types of a Bunsen burner depend on oxygen supply. On the left a rich fuel with no premixed oxygen produces a yellow sooty diffusion flame; on the right a lean fully oxygen premixed flame produces no soot and the flame color is produced by molecular radicals, especially CH and C2 band emission. The purple color is an artifact of the photographic process.

Flame color depends on several factors, the most important typically being blackbody radiation and spectral band emission, with both spectral line emission and spectral line absorption playing smaller roles. In the most common type of flame, hydrocarbon flames, the most important factor determining color is oxygen supply and the extent of fuel-oxygen "pre-mixture", which determines the rate of combustion and thus the temperature and reaction paths, thereby producing different color hues. 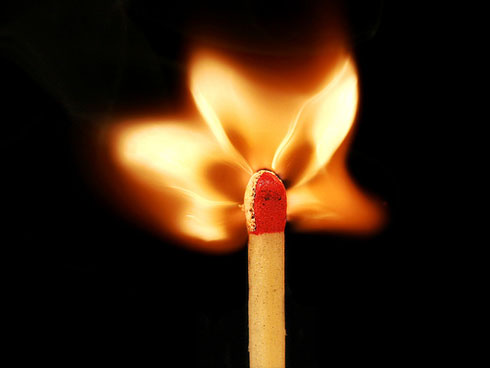 In a laboratory under normal gravity conditions and with a closed oxygen valve, a Bunsen burner burns with yellow flame (also called a safety flame) at around 1,000°C. This is due to incandescence of very fine soot particles that are produced in the flame. 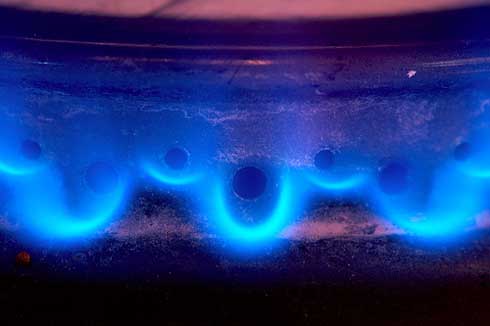 With increasing oxygen supply, less blackbody-radiating soot is produced due to a more complete combustion and the reaction creates enough energy to excite and ionize gas molecules in the flame, leading to a blue appearance. The spectrum of a premixed (complete combustion) butane flame on the right shows that the blue color arises specifically due to emission of excited molecular radicals in the flame, which emit most of their light well below ~565 nanometers in the blue and green regions of the visible spectrum.

Flame temperatures of common items include a blow torch at 1,300°C, a candle at 1,400°C, or a much hotter oxyacetylene combustion at 3,000°C. Cyanogen produces an ever-hotter flame with a temperature of over 4525°C (8180°F) when it burns in oxygen. 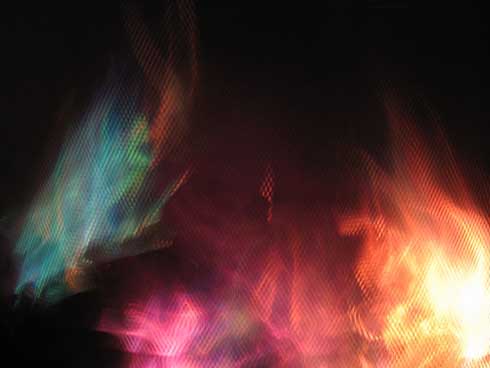 Generally speaking, the coolest part of a diffusion (incomplete combustion) flame will be red, transitioning to orange, yellow, and white the temperature increases as evidenced by changes in the blackbody radiation spectrum. For a given flame's region, the closer to white on this scale, the hotter that section of the flame is. The transitions are often apparent in TV pictures of fires, in which the color emitted closest to the fuel is white, with an orange section above it, and reddish flames the highest of all. Beyond the red the temperature is too low to sustain combustion, and black soot escapes. A blue-colored flame only emerges when the amount of soot decreases and the blue emissions from excited molecular radicals become dominant, though the blue can often be seen near the base of candles where airborne soot is less concentrated. 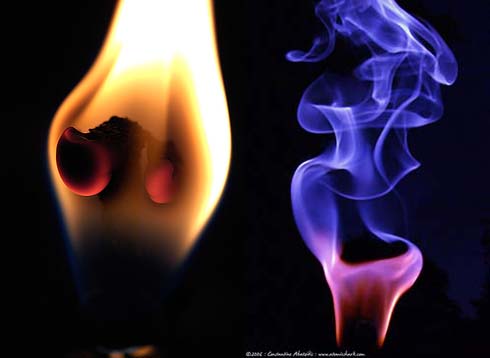 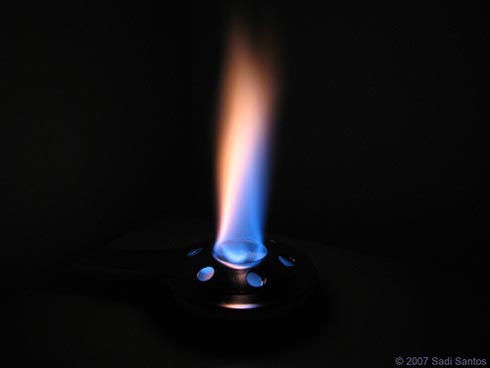 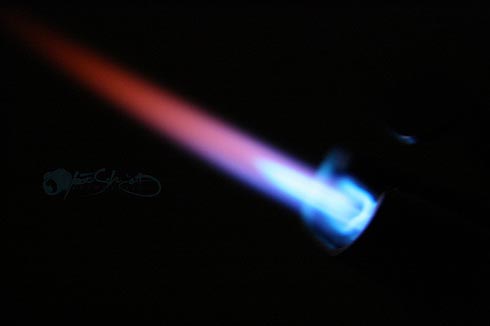 From the CL Library

AWESOME! I love the look of fire
Reply

Reminds me of the previous posting The Electrifying Colors of Candlelight.
Reply

good call, MrFurious. i hope you're not too angry. thanks for adding the link.
Reply

see, i don't like fire as much as i like smoke. i burn incense and i can sit there for hours watching the smoke rise. ^^
Reply

I had to memorize the coloured flames of certain elements for my AP Chemistry class. they're really pretty.

this was interesting. (:
Reply

I Love it! Never know fire could be this interseting ^.^
Reply

courtney love
sorry i dont use spellcheck andten ti exxhaust. how would you wrap a candle ? dand l used an origami fold im looking at this rose origami, poisonous btw and the packiging wll be marigold metallic velvets with taffeta and ombre ribbons and bachelors button silk flowers by my littel millinery genuys nbichola diehl.
realaly id id buy ricj ownes first t shirt . i believ it was in "BONE"...........

and as to the mags we were at glamour
Reply