Mushrooms have been inspiring the cuisines of many cultures for centuries, but little did i know, they were once a commonly used textile dye because of the vast range of colors you can achieve using mushrooms. The colors of mushrooms are deep and rich adding a fascinating and unexpected touch to the surrounding palette of colors in which they grow.

Here are some examples mushrooms and their uses to inspire your next palette, color or pattern. 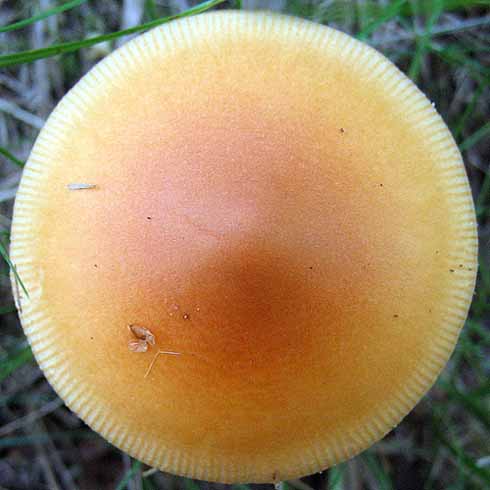 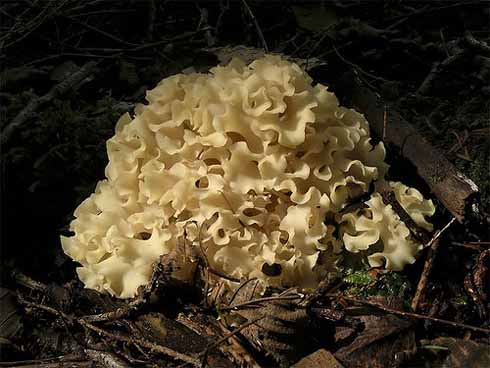 Photo by MaKeR i

The terms "mushroom" and "toadstool" go back centuries and were never precisely defined, nor was there consensus on application. The term "toadstool" was often but not exclusively applied to poisonous mushrooms or to those that have the classic umbrella-like cap-and-stem form. Between 1400 and 1600 A.D., the terms tadstoles, frogstooles, frogge stoles, tadstooles, tode stoles, toodys hatte, paddockstool, puddockstool, paddocstol, toadstoole, and paddockstooles sometimes were used synonymously with mushrom, mushrum, muscheron, mousheroms, mussheron, or musserouns. The term "mushroom" and its variations may have been derived from the French word mousseron in reference to moss (mousse). There may have been a direct connection to toads (in reference to poisonous properties) for toadstools. However, there is no clear-cut delineation between edible and poisonous fungi, so that a "mushroom" may be edible, poisonous, or unpalatable. The term "toadstool" is nowadays used in storytelling when referring to poisonous or suspect mushrooms. The classic example of a toadstool is Amanita muscaria. 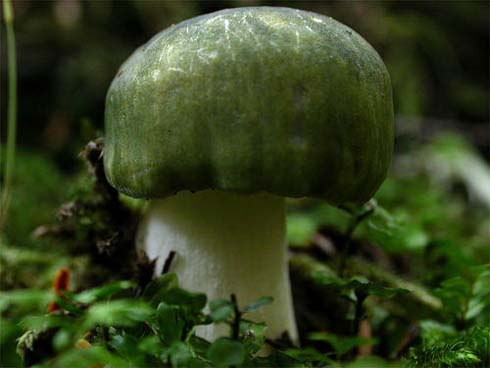 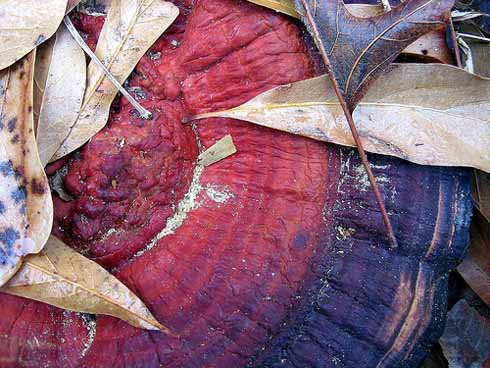 Though mushroom fruiting bodies are short-lived, the underlying mycelium can itself be long-lived and massive. A colony of Armillaria ostoyae in Malheur National Forest in the United States is estimated to be 2,400 years old, possibly older, and spans an estimated 2,200 acres. Most of the fungus is underground and in decaying wood or dying tree roots in the form of white mycelia combined with black shoelace-like rhizomorphs that bridge colonized separated woody substrates. 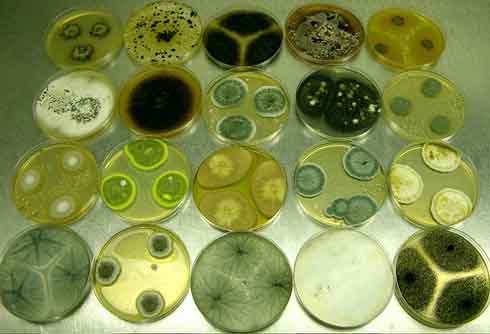 Photo by petrichor; a VERY small selection of the total fungi obtained from a 1 in 100 dilution of one gram of soil.

Edible mushrooms are used extensively in cooking, in many cuisines (notably Chinese, European, and Japanese). Though mushrooms are commonly thought to have little nutritional value, many species are high in fiber and provide vitamins such as thiamine, riboflavin, niacin, biotin, cobalamins, ascorbic acid. Though not normally a significant source of vitamin D, some mushrooms can become significant sources after exposure to ultraviolet light, though this also darkens their skin. Mushrooms are also a source of some minerals, including iron, selenium, potassium and phosphorous. 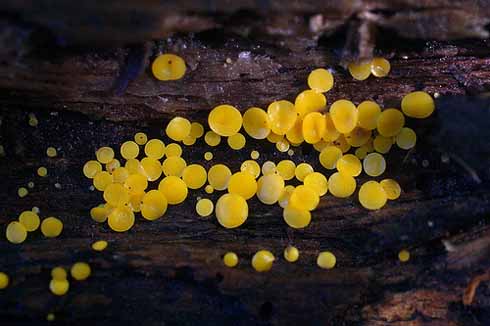 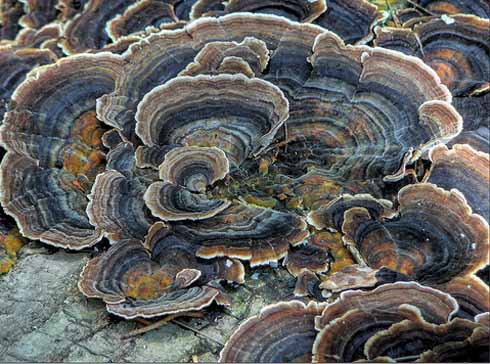 Most mushrooms that are sold in supermarkets have been commercially grown on mushroom farms. The most popular of these, Agaricus bisporus, is safe for most people to eat because it is grown in controlled, sterilized environments, though some individuals do not tolerate it well. Several varieties of A. bisporus are grown commercially, including whites, crimini, and portabello. Other cultivated species now available at many grocers include shiitake, maitake or hen-of-the-woods, oyster, and enoki. 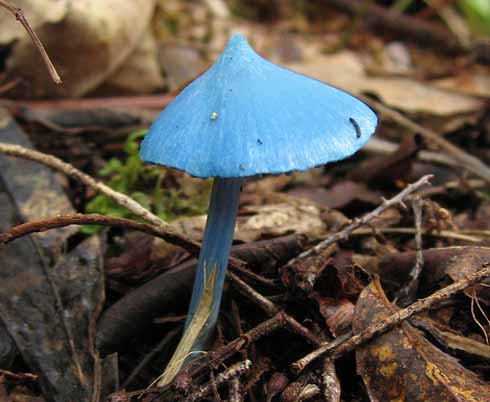 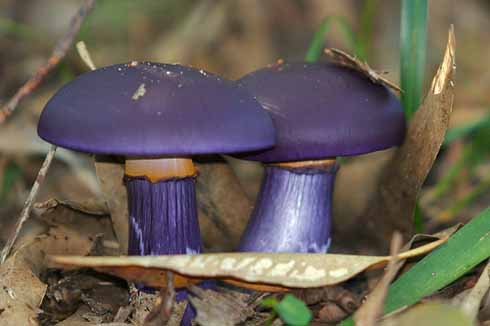 There are a number of species of mushroom that are poisonous, and although some resemble certain edible species, eating them could be fatal. Eating mushrooms gathered in the wild is risky and should not be undertaken by individuals not knowledgeable in mushroom identification, unless the individuals limit themselves to a relatively small number of good edible species that are visually distinctive. More generally, and particularly with gilled mushrooms, separating edible from poisonous species requires meticulous attention to detail; there is no single trait by which all toxic mushrooms can be identified, nor one by which all edible mushrooms can be identified.

People who collect mushrooms for consumption are known as mycophagists, and the act of collecting them for such is known as mushroom hunting, or simply "mushrooming". 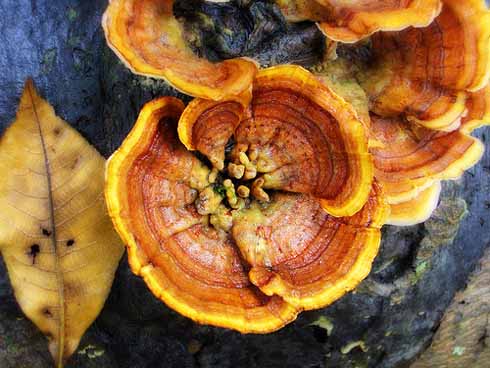 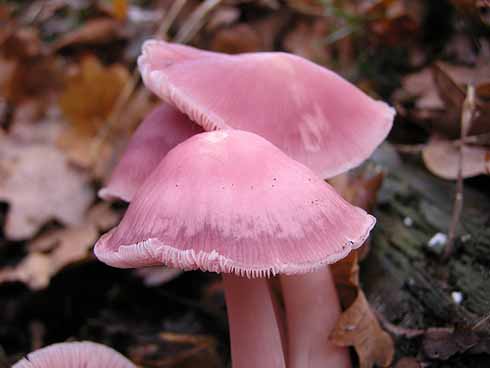 Of central interest with respect to the chemical properties of mushrooms is the fact that many species produce secondary metabolites that render them toxic, mind-altering, or even bioluminescent. Though there are only a small number of deadly species, several have particularly severe and unpleasant symptoms. Toxicity likely plays a role in protecting the function of the basidiocarp: the mycelium has expended considerable energy and protoplasmic material to develop a structure to efficiently distribute its spores. One defense against consumption and premature destruction is the evolution of chemicals that render the mushroom inedible, either causing the consumer to vomit the meal or avoid consumption altogether. 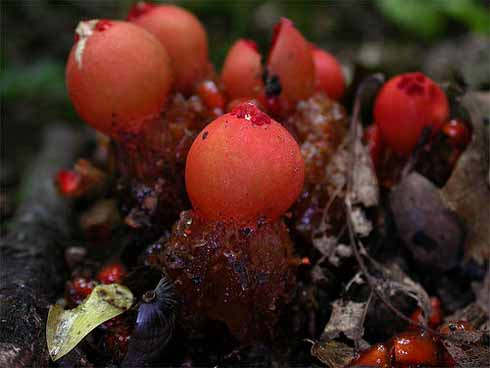 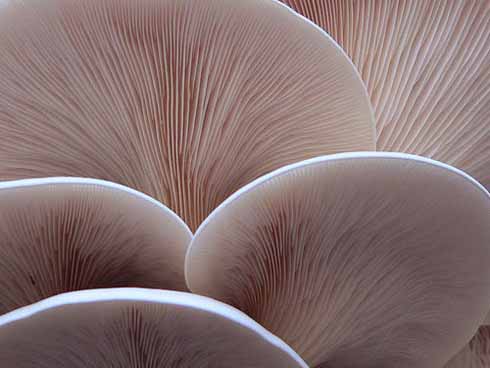 Psilocybin mushrooms possess psychedelic properties. They are commonly known as "magic mushrooms" "mush" or "shrooms" and are available in smart shops in many parts of the world, though some countries have outlawed their sale. They have recently been found to induce profound mystical experiences that give meaning to the subjects several months later. Because of their psychoactive properties, some mushrooms have played a role in native medicine, where they have been used in an attempt to effect mental and physical healing, and to facilitate visionary states. One such ritual is the Velada ceremony. A practitioner of traditional mushroom use is the shaman and curandera (priest-healer) María Sabina. 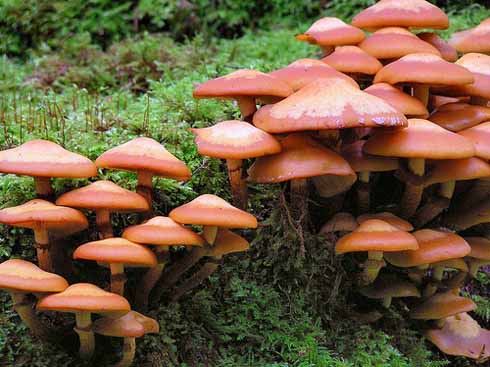 Photo by Roger B. 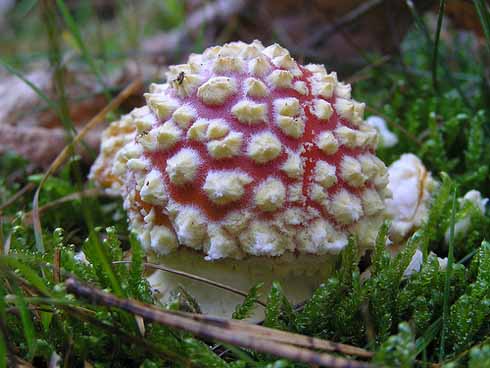 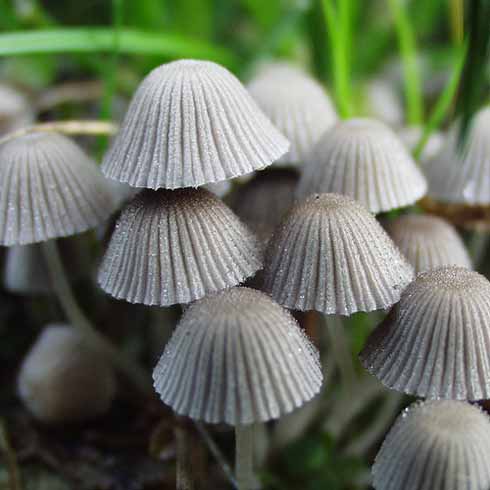 Currently, many species of mushrooms and fungi used in folk medicine for thousands of years are under intense study by ethnobotanists and medical researchers. Maitake, shiitake, chaga, and reishi are prominent among those being researched for their potential anti-cancer, anti-viral, or immunity-enhancing properties. Psilocybin, originally an extract of certain psychedelic mushrooms, is being studied for its ability to help people suffering from mental disease, such as obsessive-compulsive disorder. Minute amounts have been reported to stop cluster and migraine headaches. 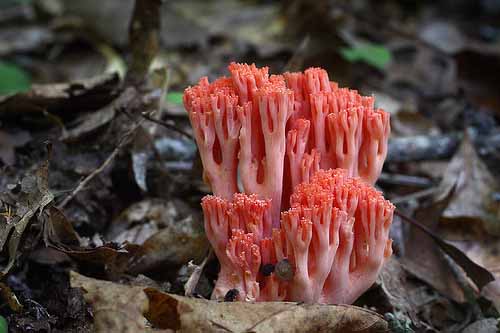 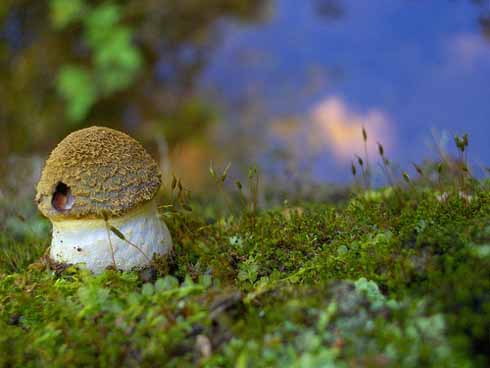 Mushrooms can be used for dyeing wool and other natural fibers. The chromophores of mushrooms are organic compounds and produce strong and vivid colors, and all colors of the spectrum can be achieved with mushroom dyes. Before the invention of synthetic dyes mushrooms were the primary source of textile dyes. This technique has survived in Finland, and many Middle Ages re-enactors have revived the skill.[citation needed] Some fungi, types of polypores loosely called mushrooms, have been used as fire starters (known as tinder fungi). Ötzi the Iceman was found carrying such fungi. Mushrooms and other fungi will likely play an increasingly important role in the development of effective biological remediation and filtration technologies. can be searched for patents related to the latest developments in mycoremediation and mycofiltration. 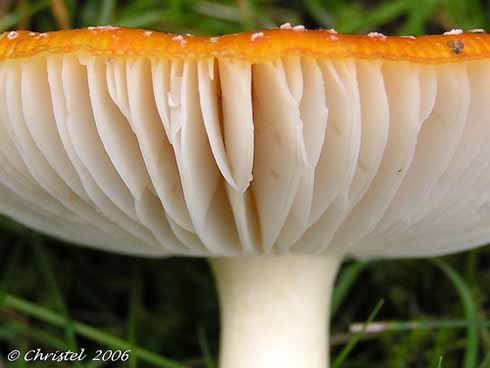 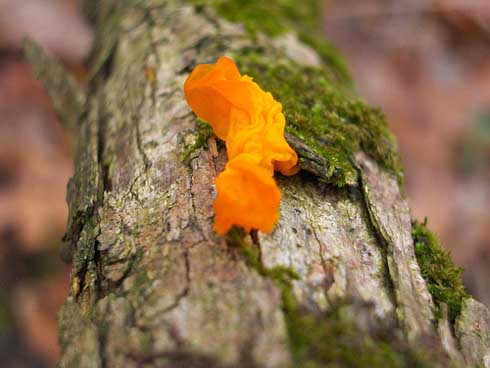 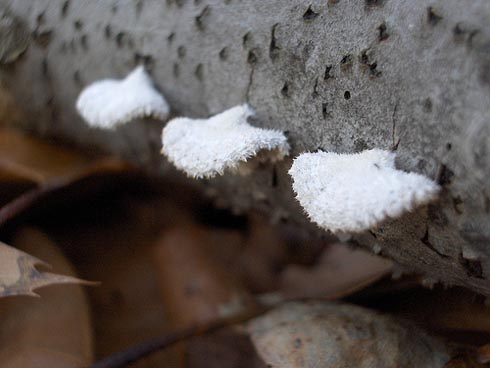 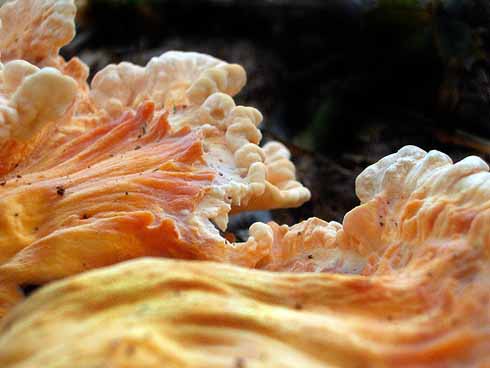 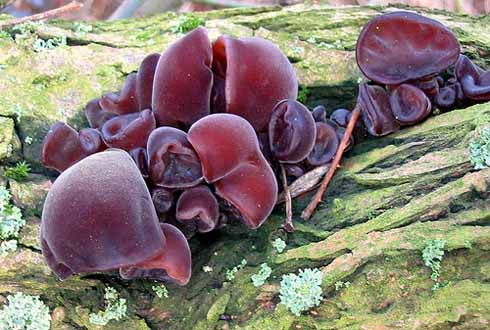 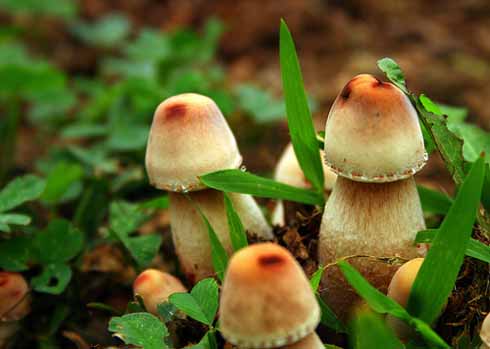 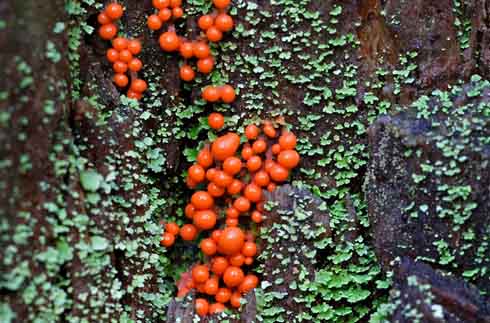 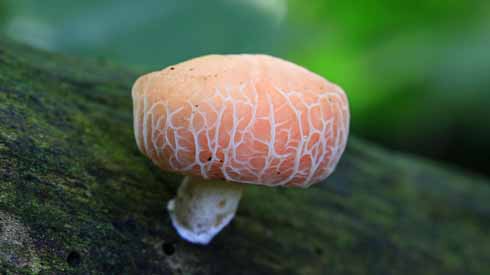 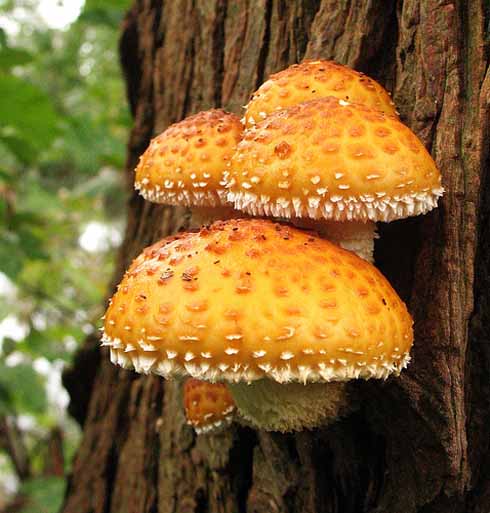 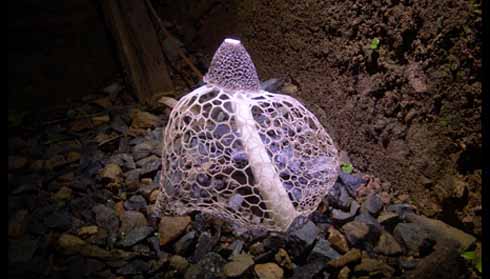 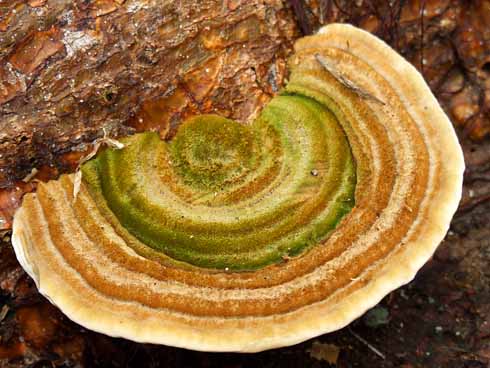 www.colourlovers.comDavid Sommers has been loving color as COLOURlovers' Blog Editor-in-Chief for the past two years. When he's not neck deep in a rainbow he's loving other things with The Post Family (http://thepostfamily.com/), a Chicago-based art blog, artist collective & gallery.
19 Comments
Showing 1 - 19 of 19 Comments
Reply

Beautiful pictures! Since when are mushrooms so pretty?
Reply

dang mushrooms are pretty. there's actually a joke about mushrooms, however:

A family goes on a walk in the woods, where they find a group of mushrooms. They don't know if they're any good to eat, so they bring them home for to have the cat try. He's fine, so they eat them. They go out to the movies.
They come back, and the cat is dead on the front porch. The family freaks out and rushes to the hospital to have their stomachs pumped.
They come back, and their neighbor is sitting on the front porch with the dead cat. He says: "Hey, folks, I ran over your cat with my truck. I'm really sorry."

bah-dum-PSSSHHHH. stupid joke, i know, but i think it's a bit of shroom humour! :D
Reply

I love mushrooms and these are beautiful pictures of them.
Reply

Some old palettes. :) Definitely will be making some new one to go with these pretty photographs.
Reply

Our world is really colourful!
Reply

again, wonderful post :)
i'm currently preparing my first batch of kombucha- fermented mushroom tea, so this is inspiring.
...love the mushroom with lacey hood over it, reminds me of radiolarian drawings from Ernst Haeckl.
Reply

Amazing photos. Love love love this post. It makes me want to do an entire series on these fungi.
Here's a mushroom palette I did last month.

Wow, crazy! It's amazing, some of the colors these fungi are.... looks almost fake!
Reply