With the Olympics wrapped up in China and the total medal count tallied, red seems to have won. China, who dressed completely in red, came out winning an astounding 51 gold medals, and the top 10 overall medal winning countries all include red in their national colors. So, we're taking a look at some recent research to see if wearing the color red is really more favorable in athletics. 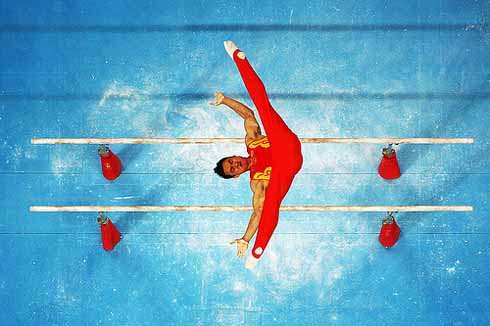 Many animals, including other mammals, see in different ranges of the light spectrum than humans. Our ability to see in the shorter lengths was developed by primates whose vision adapted to see red, outdoing their lemur relatives who could only see green and blue. And because it was developed as a survival skill -- picking out ripe fruits, those that contain a higher energy value, red has become immediately recognizable to us.

Researchers have found that referees favor those who wear red.

Forty-two taekwondo referees were asked to score a series of video matches of two fighters, one in red and one in blue. The two sets of clips were identical except the colors of the competitors was switched in one of them.

The study revealed a 13 percent favor towards the fighter wearing red. They also noted that in matches were the two athletes ability was unevenly matched, the favoritism towards red was not significant.

In another study done during the 2004 Olympic games anthropologists surveyed four sports showing competitors were more likely to win their contests if they wore red uniforms or red body armor. 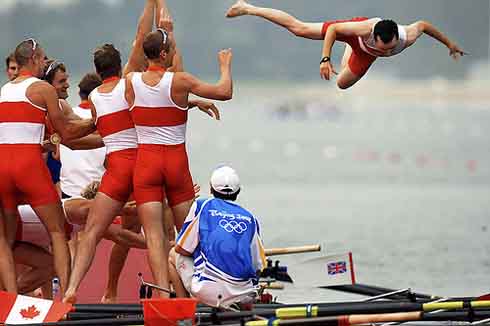 "Across a range of sports, we find that wearing red is consistently associated with a higher probability of winning," report Russell A. Hill and Robert A. Barton of the University of Durham in England.

The anthropologists made a preliminary analysis of the Euro 2004 international soccer tournament, in which teams wore jerseys of different colors in different matches. They found that five teams scored more goals and won more often when they wore shirts that were predominantly red, as opposed to blue or white jerseys.

A case can perhaps be made that most of the recent (article originally published 5/19/2005) winners of U.S. sports championships have at least a touch of red on their uniforms: among pro teams, the Boston Red Sox, New England Patriots, the Detroit Pistons. And in college football, Southern California.
- USA Today

Besides this years Olympics, there have been many examples of red wearing teams dominating their sport, here are a few: 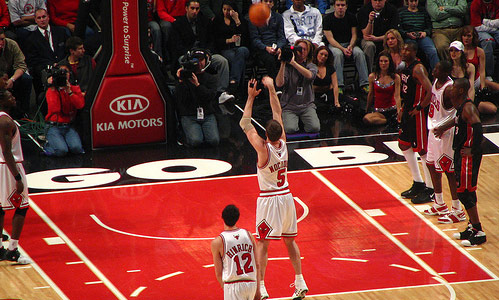 The team was founded in 1966 and is generally regarded as one of the NBA's most successful franchises, and is well known for having one of the greatest dynasties in NBA history during the 1990s, winning 6 championships in 8 years with two three-peats. The Bulls won a record 72 games during the 1995–96 NBA season and helped spread the popularity of the NBA around the world. 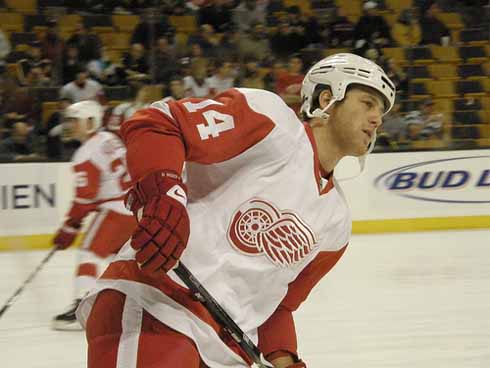 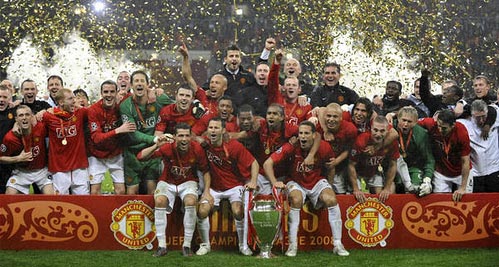 The club is the second most successful in the history of English football and by far the most successful of recent times, having won 20 major honors since the start of Alex Ferguson's reign as manager in November 1986. They are the Premier League's reigning champions, and have won England's top division 17 times, one short of Liverpool's record of 18 league titles. In 1968, they became the first English club to win the European Cup, beating S.L. Benfica 4–1. They won a second European Cup as part of an unprecedented Treble in 1999, before winning their third in 2008, 40 years almost to the day after their first. The club also holds the record for the most FA Cup titles with 11.

Yeah, doesn't red make you win all types of sports because it freaks out the other team?
Reply

Our town sports team has mostly all red, and I guess we win a lot (:
Reply

this is true, except for the fact that they forgot the bulls suck now. :P oh, and they make the opposing teams change in pink rooms, because it's girlier.
Reply

Interesting theory! An urban legend supports this -- that police are more likely to pull you over if your car is red. I don't know if that's true or not.

However, in the case of the Olympics, it's probably a more important factor that China was competing on the "home court," which is always an advantage. This is clearly demonstrated over the history of the modern Olympics.
Reply

So this is why Finland never wins! We always wear blue.
Reply

There was an article on this before, wasn't there? Well, if there wasn't, I've definitely read about this once, and it's truly fascinating!
Reply

Another counterpoint: Albania (predominantly red, but often paired with black or white).
Reply

Reasearch... ha ha.
Wait until next olympic games and it will be proven wrong!
I should not say, but Brasil is preparing a surprise for the next games. No, we will not change our uniform colours!
Reply

Cincinnati Reds at their time were a Red baseball Empire.
Reply

Interesting
- Uniform colors are one of my favorate things about sports (and I like to be quizzed on them to show off), but I must comment that the Cincinatti Reds have sucked since the 1970's and the Arizona Cardinals have never shown any success since their start. I feel like are more also, and...
my Yankees are blue and even when they lose they are still the best franchaise in sports.
Go Yankees! :)
Reply

Wasn't there another theory about how wearing red might affect your academic performance? Like it wouldn't be a good idea to wear/see red while taking an exam? Hm
Reply