A recent touring exhibition is turning a long held common belief on its head. The common perception is that the great statues and buildings of ancient Greece and Rome were all pure unpainted stone or green tarnished bronze, but researchers have been arguing that this may not been what these classic monuments really looked like back in the era of their creation. That, in fact, these statue's were quite alive and vibrant, full of color.

Researchers believe, particalurly Vinzenz Brinkmann who has been doing this research for the past 25 years, that artists used mineral and organic based colors and after centuries of deterioration any trace of pigment leftover when discovered, would have been taken off during any cleaning processes done before being put on display, washing the historical art clear of its true colors.

The findings of this research completley changes the commonly held modern ideas of the ancient world, and the way we view modern sculpture and art today, much of which was based on those classical Greek and Roman styles. 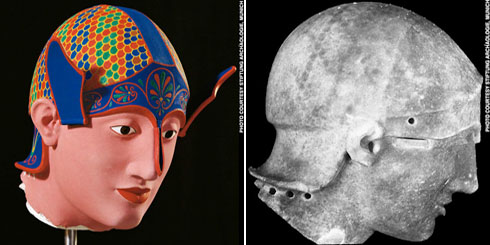 The exhibition, 'Gods in Color: Painted Sculpture of Classical Antiquity' features more than 20 full-size color reconstructions of Greek and Roman works, alongside 35 original statues and reliefs. In two reviews of the exhibition, which is running at Harvard University's Arthur M. Sackler Museum in Cambridge, Massachusetts, with additional works at the Getty Villa in Malibu, California, the authors describe the experience of first seeing something that was, for so long, thought to be a bare, lifeless statue, now come to life with color. 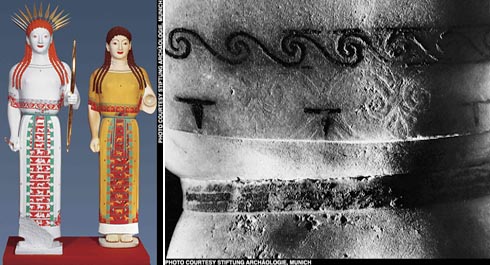 Walking through the galleries, I pause in front of a color reconstruction of a marble portrait of the Roman emperor Caligula, who ascended the throne in a.d. 37 at age 25, and ruled until his assassination four years later. I'm used to seeing him in "classic white": his pupil-less eyes set against a ghostly pallor, frozen in a regal gaze. But color makes me focus on different facial features, such as the mop of thick, brown hair that frames his fleshy face, which is accented by bright hazel eyes and soft rosy lips. His cheeks are shaded in areas that bring out a plumpness, revealing his youth. I feel as if the deceased despot from my dry history books was actually once young, handsome, and alive.
- archaeology.org 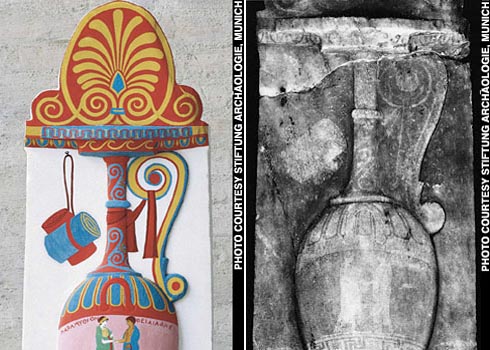 One of the greatest statues of Augustus, first emperor of Rome, has come down to us in marble. His carved armor and rippling robe meld into the symphony of cream on cream we all expect. At the Getty, a reconstruction of the piece, retouched with colors based on tints that still cling here and there to the original, has the great Augustus togaed in a cherry red that matches his lips. His tunic's touched with blue. What he's lost in elegance he's regained in verve.
- washingtonpost.com 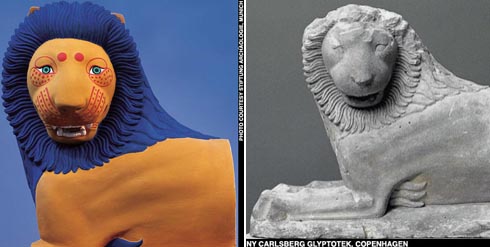 With examples from literature like this: "If only I could shed my beauty and assume an uglier aspect/The way you would wipe color off a statue," a quote used by one of the authors said by Helen of Troy, in lines written by Euripides in 412 B.C., it is a wonder how it took us as long as it did to realize the colorful truth behind some of Man's oldest artistic relics.

The authors go on to talk about Brinkmann and his research. 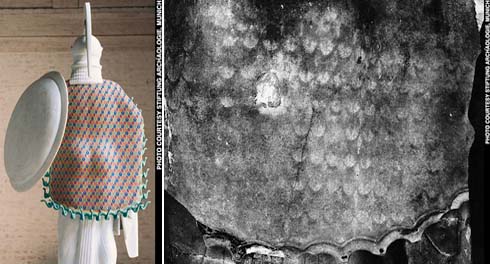 And even after extensive visual and scientific analysis of the original sculptures, Ebbinghaus admits, scholars still don't know if the paint was applied in one or two coats, how finely the pigments were ground, or exactly which binding medium would have been used in each case--all elements that would affect the appearance of a finished piece. Generally, though, the color reconstructions in the exhibition "truly look closer to ancient sculpture than just the plain white marble," she says.
- archaeology.org

When Brinkmann was a graduate student working on toolmarks in Greek marbles. He realized that the special lighting used to spot where a chisel had once passed could also reveal where ancient colors had been.

If you looked closely enough, with scientific equipment and rigor, many sculptures started to look like a coloring book just waiting to be painted in. Lab analysis of the microscopic grains of pigment that had survived here or there on many sculptures, along with close examination of the faded tints that had survived intact on another few, supplied the colors of the paint
- washingtonpost.com

Gods in Color is a traveling exhibition, previously shown throughout Europe. It is on view at the Sackler, the first U.S. venue, through January 20. Some pieces will be displayed at the Getty Villa in Malibu in an exhibition titled The Color of Life (March 6-June 23, 2008).

Are you feeling inspired to give your project a Romanesque look and feel? Check out Creative Market for just the right font. 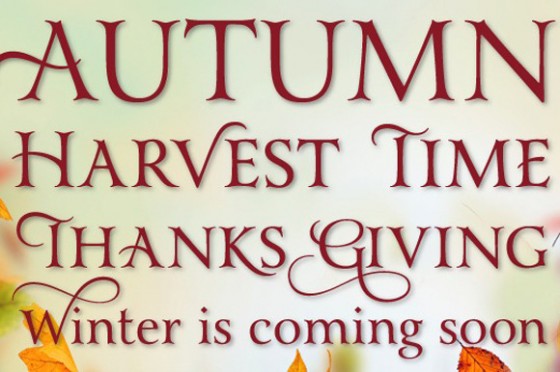 www.colourlovers.comDavid Sommers has been loving color as COLOURlovers' Blog Editor-in-Chief for the past two years. When he's not neck deep in a rainbow he's loving other things with The Post Family (http://thepostfamily.com/), a Chicago-based art blog, artist collective & gallery.
17 Comments
Showing 1 - 17 of 17 Comments
Reply

This is awesome!
Ive read about the colourful sculptures before, but never seen images like these. I particularly love that lion. Just stunning.
Reply

How beautiful! I love that lion too... amazing :)
Reply

Its refreshing to see the colors of these, becuase everyone has it in their heads that the romans were these solemn astute scholarly/ warlike people - its good to see that they had this brilliant sense of color.
Reply

wow, these are stunning.
Reply

While I am much less qualified than the person running this exhibit I do have an unqualified position to take. The major problem that I see with this is Pompeii. If statues were indeed painted, then why did we not find these kind of painted statues preserved in Pompeii. I would think that the paint would have been preserved because many of the murals were found to still be intact and colorful.
Reply

Oh, I love the archer's colors!

Wow, I've never thought about color on these statues. This is amazing! Hippestgoldfish has a great point, and it seems there would be pigments in the crevices that hadn't been cleaned away, which could be found with close examination. But it seems logical that the statues would have been painted. It just seems right, especially seeing Caligula's eye painted onto the blank stare we're all so used to seeing.

I've always known, but it's so hard to visualize. >.
Reply

it just seems wrong. i'm so used to them without colour it doesn't seem right to see them with. it makes sense, though, that they would have had some colour.
Reply

I studied about this in college... but I never liked it! I thought the colour suddenly made these fantastic statues look oh-so tacky. Haha... we're just so used to seeing them without colour, I guess.
Reply

This article has really got me thinking. It really relates to my area of art. Thank you so much. I need to write an article about this. People regard color with tackiness - non-color with classiness. Hmmmm.
Reply

I wonder if they used shading and highlighting. Just because we can only find traces of colours, doesn't mean they couldn't tint them.
Reply

I've always know that ancient sculptures were painted, but this new research and the pictures really brings it to life. I wish I could have see the exhibit when it was touring.
Reply

Looking at this, I can't help feeling that the colors are a bit blocky and flat. Especially on the Greek statues. Is it possible that just the under-painting came through with the ultraviolet light? With such detailed sculptures, I find it hard to believe that the painting of the statues themselves would be so simplistic. The color selection is nice but it feels as though much is missing. Details, details, details.
Reply

Doing a quick bit of research... is it possible that this "purple" has been interpreted incorrectly? It just feels wrong and there is literature that suggests there is a purple that looks more like a dusky red on the Munsel l color chart. It would certainly make the Lion more "natural" as well as making the warriors less... comical.
Reply