The umbrella or parasol, brolly, gamp, parapluie and bumbershoot, as it is also known in other names, is one of man's oldest artifacts. Its long history spans great empires and interminable distances, and has been on record since there were records for things to be on. The history dates back just far enough that there is no conclusive evidence or agreement among brolliologists, those who study umbrellas, of the its true origin. Nor is it agreed upon whether it was first used as protection from the sun or from the rain.

Below is a wonderfully interesting article about umbrellas that I found over at the Big Site of Amazing Facts, mixed in with a little color inspiration. 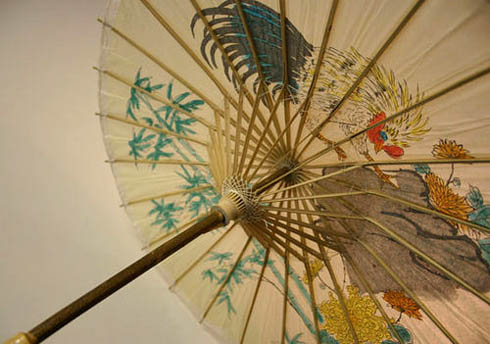 The umbrella is so old that brolliologists can't agree on its origin, or decide whether it was first used for protection from the rain or the sun. They do know that it was employed as an item of religious and ceremonial regalia from the earliest days of ancient Egypt. Egyptian mythology held that the visible sky was actually the underbelly of a god stretched from one end of the earth to the other like an immense umbrella. Hence, in contemporary art, priests and Pharoahs were often placed in the shade of an umbrella to symbolize royal and religious power.

Assyrian tablets dating from 1350 B.C. depict a king leading his retinue while servants shade the royal head with a long-handled parasol. In India, a religious group known as the Jains called their ultimate heaven of perfected souls by a name that translates as "The Slightly Tilted Umbrella."

The early Greeks used the umbrella as a symbol of productivity and sexual aggression, usually associated with the god Bacchus, and they carried umbrellas in many of their parades and festivals. In later centuries, the Greeks put the umbrella to a more utilitarian use as a sunshade, and developed sunshade hats similar to the sombrero.

The Romans, too, used parasols against the sun. Women attending chariot races in the amphitheatre sometimes dyed their parasols to denote their favorite chariot team. If you've ever attended a football game in drizzly weather and have been annoyed to no end by umbrellas blocking your line of vision, you may find it comforting to know that the Romans had a similar problem at their games, with a hot dispute over parasol use finally decided by the emperor Domitian, in favor of the sunshade.

Brolliologists are divided over the origin of the Chinese umbrella. Some say the Chinese developed their contraption independently of the West. Others claim that the umbrella spread from Egypt eastward to China; still others maintain that the Egyptians owe the brolly to the Chinese. In any case, the use of the umbrella was well established in China at a very early date. Oiled paper or bamboo were the favored materials. A Korean tomb dating from 25 B.C. contained a collapsible umbrella complete with rib supports. 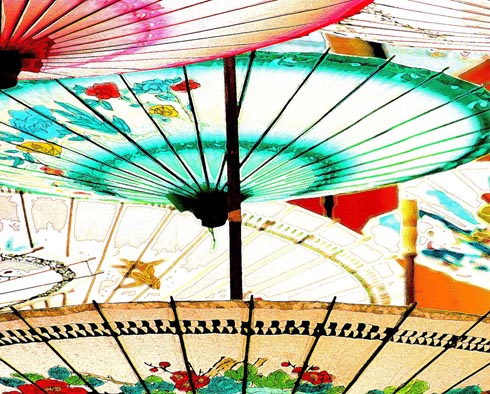 Europe was introduced to the bumbershoot through ancient Byzantium. In the eighth century, Pope Paul I gave Frankish King Pepin the Short a jewel-handled umbrella as a token of Papal support for his reign.

In the fifteenth century, Portuguese seamen bound for the East Indies brought along umbrellas as fit gifts for native royalty. Upon landing on a strange island, the seamen immediately opened an umbrella over their captain's head, to demonstrate his authority.

The Normans brought a twelve-ribbed umbrella to England in the eleventh century. But the first contextual use of the word "umbrella" (from umbra, Latin for "shade") does not appear in English literature until 1609, in the work of John Donne. The spelling was not finalized until much later, and umbrellow, umbrello, and umbrillo were common as late as the nineteenth century. 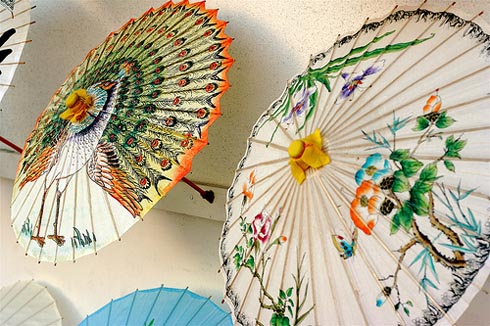 The man usually credited with popularizing the umbrella in London was one John Hanway, a seventeenth-century traveler who brought the brolly to England from Portugal. Hanway created quite a stir by strolling through London under the strange contraption. He perambulated about in all kinds of weather, and was often greeted by jokes from passersby. He was likely to suffer abuse from coachmen, who feared the popularity of such a device would cut into their trade.

Religious Londoners objected to the umbrella on moral grounds, after all, the purpose of heavenly rain was to make people wet. But despite these objectors, the use of the umbrella spread steadily in the showery city. For some time, they were called Hanways in honor of their eccentric pioneer. The word gamp, incidentally, comes from Charles Dickens's novel Martin Chuzzlewit, in which a large cotton umbrella is the trademark of one Sairy Gamp. 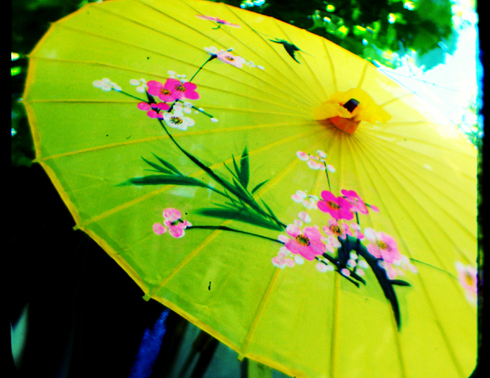 The English didn't invent the umbrella, but they did develop the first practical waterproof bumbershoot. This happened in the late seventeenth century. By 1700, umbrellas were in regular commercial production, with whalebone the favored material for the ribs.

Early English umbrellas were hardly perfect, though. They were large and cumbersome, frequently they leaked, and they broke easily in a strong wind. They were most in evidence in coffee houses, where a supply was kept by the door for patrons who might dash from the coffee house to a carriage. Like the ancient Romans, the English for many years considered the gamp too effeminate for use by men.

Some wily Londoners put the brolly to another curious employment: orators frequently held an umbrella above their head while addressing a crowd, to protect themselves from missiles tossed by lessthan-approving listeners.

You may think that at least the fold-up or transparent umbrella is a recent invention. Not true! An enterprising gentleman by the name of Gosselin of Amiens constructed a fold-up "pocket" model with four interjoined steel tubes in 17851 In fact, the construction of the umbrella hasn't changed very much since 1760, when most bumbershoots were already being built with eight ribs, a sliding brace, and a curved handle. As for the transparent umbrella, an apocryphal English tale attributes its invention to a Russian prince who wanted to keep a wary eye out for mad dogs! 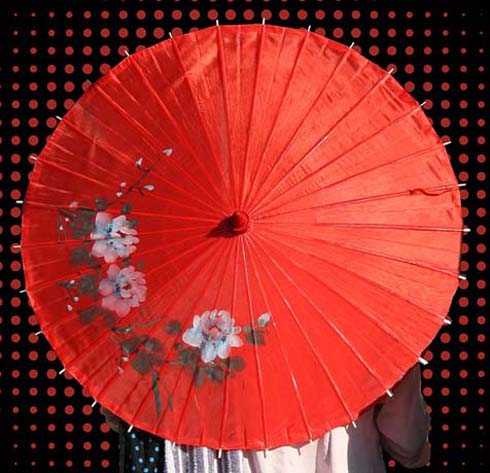 Photo by Randy Son Of Robert

Listen to this one: a group of British soldiers carried umbrellas into battle during the Napoleonic wars, until the British military decided the gamp was hardly a fitting implement for a fighting man. The Boers also used the umbrella on rain-drenched battlefields. Even the U.S. Cavalry carried brollies on occasion, particularly during the Indian wars in the rainy northern states.

By 1820, the umbrella had fallen out of fashion in Europe, and the parasol had arrived. Aristocratic English women imported fancy models from Paris made of silk or chantilly lace, with elaborate enameled handles. Some handles were fitted to carry perfume or writing materials, or even a dagger. And believe it or not, there was a model designed with one
protruding side to offer protection for the bustle that most women wore in those days.

The use of the umbrella in courtship dates back to the ancient Greeks. In the eighteenth and nineteenth centuries, young maidens frequently sat for their portrait with a delicate parasol in hand as a symbol of their class. 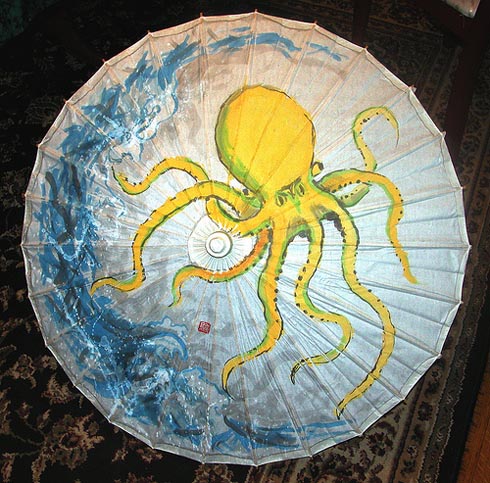 The umbrella or parasol has figured prominently in paintings by Degas, Monet, Goya, Delacroix, Seurat, and Renoir. In Brittany, custom still dictates that a young man can express his interest in a favored maiden by offering to carry her umbrella at the fair. Carrying her umbrella along the road is considered a sure sign of engagement.

Brolliologists are reluctant to estimate the number of umbrellas in use throughout the world, but the country with the highest per capita use of the gamp is definitely England. As late as 1954, 300,000 umbrellas were produced in the British Isles each month! Today, most umbrellas are imported from Hong Kong and Japan. The Japanese, incidentally, cornered the American umbrella market in the 50's, by exporting almost 12 million bumbershoots to us within a twelve month period. 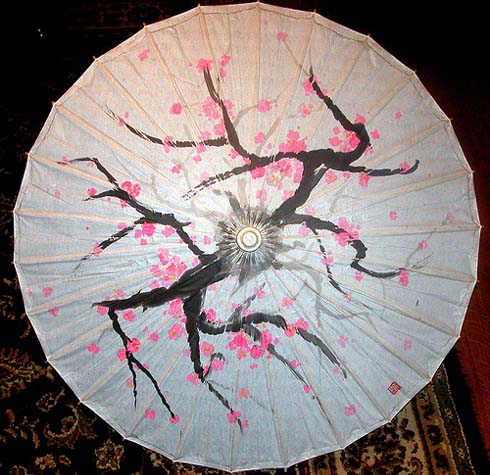 Modern umbrella makers contend that today's models are so well constructed that the average person needn't go through more than two in his lifetime. But they make no mention of the phenomenon of the lost umbrella, which more often than not is the reason for a new purchase. To suggest the scope of this problem, it may help to note that close to 75,000 umbrellas are lost each year on the bus and subway systems of London alone!

And the number of yearly umbrella thefts is anyone's guess. Which brings to mind the one about the man who left his brolly in the umbrella stand in a London pub with the following note: "This umbrella is owned by the champion boxer of England, and he's coming back in two minutes." The man then went to the bar for a drink. When he returned, the umbrella stand was empty, and in place of his brolly, he found a note that read: "This umbrella was taken by the champion runner of England. He's never coming back."

There's the widespread superstition that opening a bumbershoot indoors brings bad luck. Then, of course, there's the age-old belief that the easiest way to assure a rainy day is to leave your umbrella at home. Robert Louis Stevenson seemed aware of this peculiar meteor-logical wisdom when he wrote: "There is no act in meteorology better established, than that the carriage of the umbrella produces desiccation of the air; while if it be left at home, aqueous vapor is largely produced, and is soon deposited in the form of rain."
- Hisotory of Umbrellas

I am seriously in love with all of these pictures

they are stunning
Reply

I usually break the spokes on my umbrellas opening or closing them as I'm getting into or out of the car. I still have the one I made the palette for. It's a little bent out of shape, but not too bad. The bag I carry to work has a pocket on the side that's the perfect size for my umbrella so I've been carrying it with me every day. I can't remember the last time we got more than a brief sprinkle of rain and I actually needed to use it.
Reply

those are truly wonderful umbrellas! thanks for posting.
Reply

Those are wonderful! I've always been enamored with paper umbrellas, though I don't own any. 3,4, and 9 are my favs.
Reply

This inspired me to take a photo of my umbrella and make a palette for it!
Reply