If you haven't heard, Polaroid film is dying.

On February 8th, 2008, the Polaroid corporation announced that the incredible invention of Edwin Land has a permanent expiration date that no refrigeration can postponed; stating, "Polaroid has made the difficult decision to cease manufacturing of instant film products in 2008. We hope that you will continue to choose Polaroid products, as we take instant imaging into the digital platform with exciting new products being launched this year." The last of the film is projected to expire in September of 2009.

It seems that there is still yet one hope remaining for Polaroid film. Save Polaroid has setup shop to assemble artists and fanatics to save Polaroid.

On February 8, 2008, Polaroid Corporation announced that it will discontinue production of all instant film. This site will document the aftermath of this announcement and will serve as a home-base for the effort to convince another company to begin producing the cherished technology that Polaroid has so carelessly abandoned.

This site is not about saving Polaroid, the company, rather the remarkable invention of Edwin Land, the instant film that made Polaroid a household name. 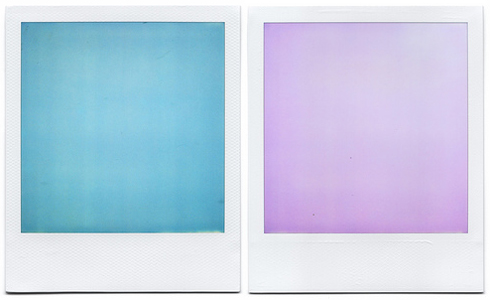 What We’ve Done So Far

Since this announcement, we’ve been assembling articles, links, stories and planning out the best way to create a joint effort to save instant film. We’ve contacted Polaroid, Fuji and Ilford about licensing.
- Save Polaroid

My good friend, and fellow member of the Chicago artist family The Post Family, artist Rod Hunting was asked by Save Polaroid to produce a limited run of his Polaroid print to be auctioned off on ebay to raise money for Save Polaroid. I sat down with Rod over some fine malt liquor to discus his 'Polareds' project, the end of Polaroid and speeding tickets. 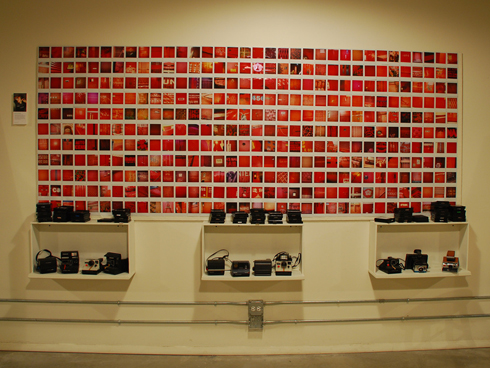 CL: How long have you been taking photos for the Polareds project?

CL: How many do you have? 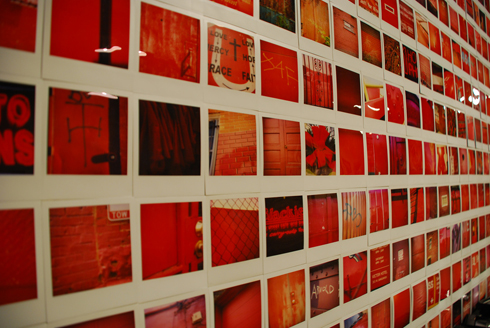 CL: What was the inspiration behind the project?

RH: I just thought it'd be cool to take 100 red Polaroids. Once I hit 100, I thought 200 would be good, then 300 and it's just gone on from there. I don't think it'll stop. Unless I can't get the film anymore. The project also became a way for me to explore the new neighborhood I had just moved into. 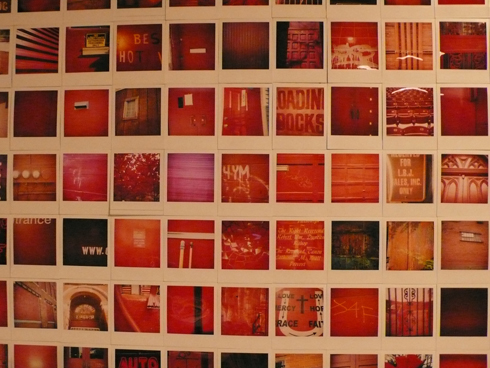 CL: Were all the photos taken in Chicago?

RH: No, wherever I go, I take my camera. I don't really travel too much, so I think there's some Wisconsin ones, some Michigan ones, maybe Ohio. A couple from California. 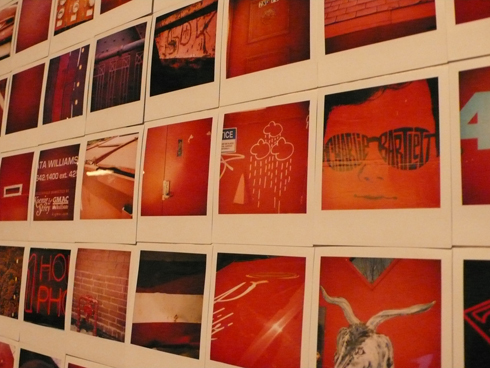 CL: What are you doing for Save Polaroid?

RH: There's going to be a very small limited edition Polaroid print up for auction on ebay soon. All the proceeds go to help them do just that, save Polaroid. I'm also working on an Edwin Land print that should be available through their site too.

CL: Do you think red cars really get pulled over by the police more often than other colored cars?

RH: No, I've heard that before, but I think it's all made up. 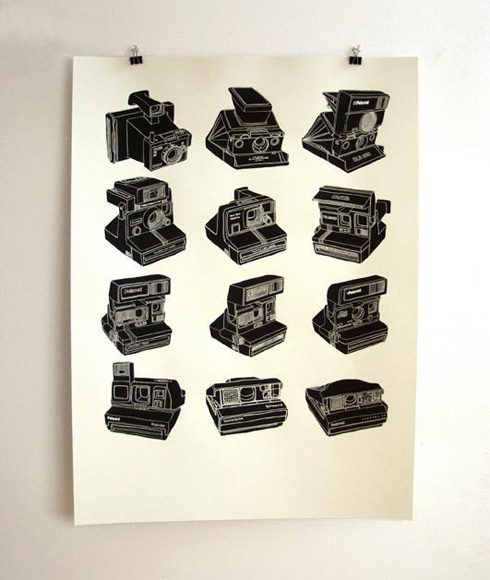 A little About Rod Hunting

The Color Polaroids of Grant Hamilton

One artist who uses Polaroids that might catch the COLORlovers eye is Grant Hamilton. His incredible compositions of colors have been a favorite of mine for a while, and it never seizes to amaze me the range of inspirations and emotions that can be evoked simply by a single solid color.

Josh Spear beat me to an interview, but it is okay, his blog is nice too. Below are some questions from Josh's Speartalks: Grant Hamilton. 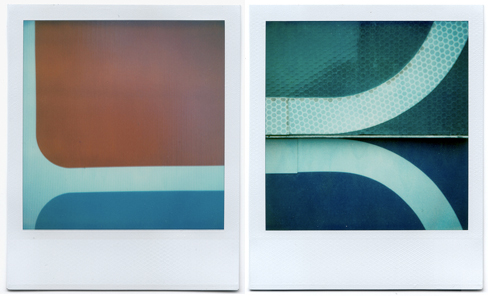 Josh Spear: Your pictures are - and this could just be a personal feeling – incredibly cooling. Do you consciously work within those colors and exposures to produce that effect?

Grant Hamilton: I don’t know. Many of them use warm colors. One question I frequently get is about the intensity of the colors. I’m often asked if I do that in Photoshop. I wish I had some secret technique, but all I do is make sure that there is plenty of sunlight, just like the package insert says. I think they are calming because I try to edit out everything unnecessary. I think good photographers are mostly just good editors. 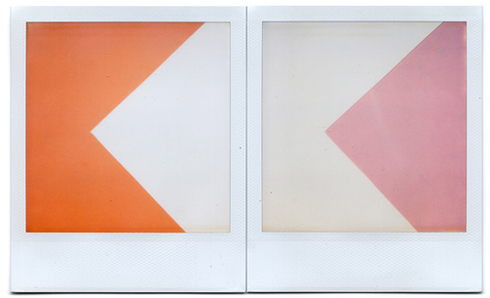 JS: It's a chilly day in early 2009; you reach into your tattered man-purse, pull out your Polaroid SX-70, and suddenly realize that the next picture you snap with that camera will be the last one you can ever take. What do you take the picture of?

GH: First of all, it is a masculine European handbag. Secondly, the last picture of my second to last pack (see answer above) will be a self-portrait of me wearing sad clown makeup holding an injured dove. And it’s raining.
- Speartalks: Grant Hamilton

The film pack contains the chemicals needed for developing, and the instant camera automatically initiates the developing process after a photograph has been taken. In most types of Polaroid instant cameras, the film is pulled out through rollers which break open a pod containing the chemicals. The chemicals spread out over the surface of the film, and the positive image appears a few seconds to minutes later. The chemicals have time delays built into them so that each layer of the film can be processed in the correct order. 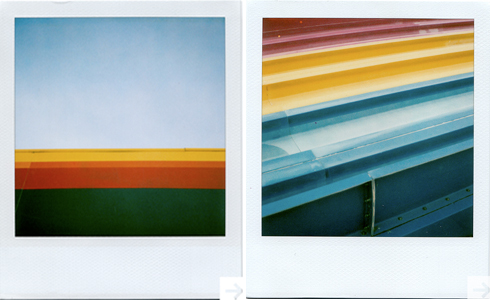 Instant film is also used by artists to achieve effects that would be more difficult to accomplish with traditional photography, by manipulating the emulsion during the developing process, or separating the image emulsion from the film base.
- wikipedia: Polaroid Film 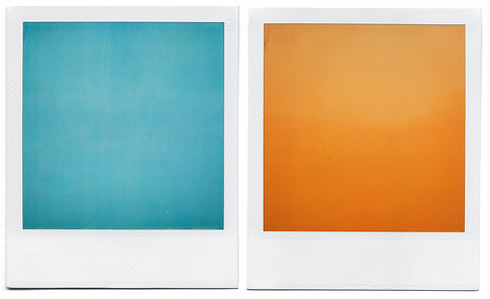 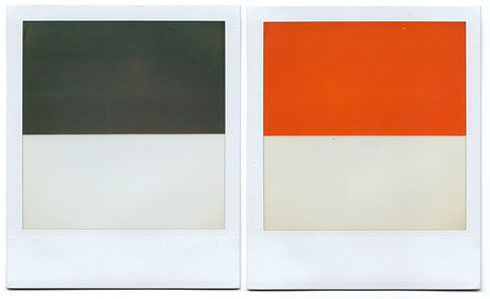 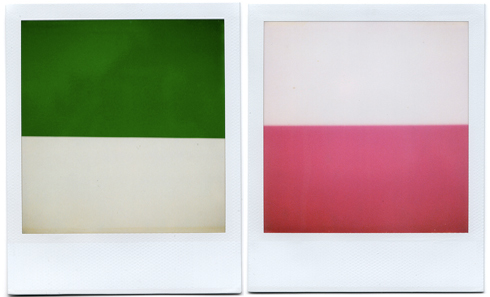 thank you for sharing this! I'm so depressed about polaroid production stopping... thanks for pointing me towards this website!
Reply

I'm a major Polaroid fan (if my profile stuff didn't give that away), and that news really makes me sad. It's like throwing away a childhood memory; I have boxes of Polaroids that my friends and I took when I was a little girl.
Reply

i hope that polaroid will lose lots of money now...
is that horrible???
Reply

I love polaroids! I like making polaroid transfers, I use the peel apart type of film. It is a guessing game but it is fun. I really hope another company starts manufacturing the film and they bring back the TimeZero film. I didn't get into polaroids until after they stopped making it. I tried buying some online but they were only selling them in bulk for like $100, not really in my film budget. It is cool because while it develops you can mark it up and manipulate the image in cool ways. Ahh polaroids...
Reply

i really like how polaroids frame images nicely. they're a true snap-shot --- a peek and a developed image of the viewfinder. the white borders are classic --
Reply

I've been looking at Grant Hamilton's images on his site - wow. Just amazing. Very inspiring too! Thanks for the article.
Reply

Thank you so much for this article. It's good to see that I'm not the only one concerned about this. ♥
Reply

this story is so sad :( i didn't belive it when i heard it last week
and i hope you are able to save polaroid
Reply

This sucks. My family has taken loads of Polaroids and I just bought my brother a pretty sweet pink Polaroid camera. I don't want to have to turn it into a lamp or something.
Reply

Ugh, so depressing. I never owned a Polaroid camera but always wanted to... but now this... blah. I too have boxes of old family Polaroids that are very sentimental.

I love Hunting's "polareds"! That is quite a beautiful array of pics. Much love :).
Reply

Great initiative to save this legacy of Polaroid
Reply

Just found this web site,Im out of the funk now that there is hope of buying p-600 film again.I pray this is a real success as I used to shoot 30-40% of my work in poloroid for my 4x5 camera(I made it from old camera parts,it works)but when poloroid died so did it.Now there is hope,also Im looking for my old sx-70,I know its in the basement somewhere.Anyway the chance to use poloroid to check the shots ,before i burn 35mm ,well its something that only poloroid fans understand.Its like waiting for christmas morning when I was a kid.I just hope there is some film still available come payday.Poloroid is to great to only make it for the "pro's",it was and is a true peoples film,and its analog!Down with Digit--.Up with adventure,suprise,instant gratifacation that you CREATE.
Reply

Wow, actually in love with grant hamilton. What a guy.
Reply

Polaroid is such a classic art! I'm so glad that people have preserved it in photography history!