I've always liked the artwork of Mark Rothko. They are simple enough to enjoy with only a passing glance, but powerful enough to absorb large amounts of time considering the emotions and meanings behind the colors and how they interact with each other.

I share a similar appreciation for the hundreds of color palettes that are uploaded to COLOURlovers on a daily basis. They can be quickly appreciated as you scroll by them, but some of will jump out and grab you on personal level. And the ones that grab you could be the ones that another person scrolls on past... These little palettes become mini-artworks that can express emotion and ideas.

As basic as color is, it is a very powerful form of expression. 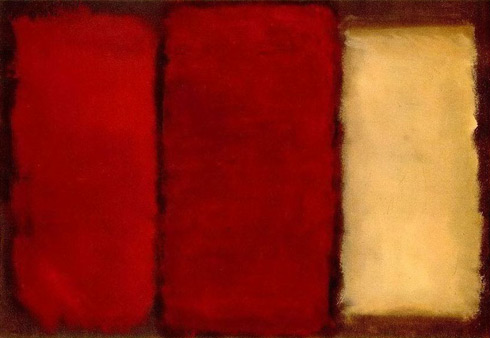 "Rothko's work is characterized by rigorous attention to formal elements such as color, shape, balance, depth, composition, and scale; yet, he refused to consider his paintings solely in these terms. He explained: It is a widely accepted notion among painters that it does not matter what one paints as long as it is well painted. This is the essence of academicism. There is no such thing as good painting about nothing."
Mark Rothko - National Gallery of Art, Washington, DC

In his career that spanned five decades, Rothko created a new form of abstract painting. This form of abstract art has been captured by and inspired many creative individuals, not just in the form of painting. Below is a collection of photographers who captured "Rothko-esque" moments.

For even more rothkoesque photos, check out the Flickr Photo Group - ROTHKOesque.

"The fact that people break down and cry when confronted with my pictures shows that I can communicate those basic human emotions.. the people who weep before my pictures are having the same religious experience I had when painting them. And if you say you are moved only by their color relationships then you miss the point."

COPASO, our color palette application allows for custom widths of each color in a palette. As people add even more expression of their color ideas into their palettes they truly become pieces of art. Here are a few palettes from the Show Me Your Widths Group here on COLOURlovers:

the sarcasm of death by electrikmonk

So Bored of Tuscany by isotope.151

wheres my flying car by lizcrimson

hit the brakes by mravka

loveeee it, especially "rothko in real life"
and all the palettes, of course
Reply

restof, you're helping me make one of my points from above... to some Rothko paintings were just colors thrown on canvas... and to others they are powerful, expressive and wonderful.

I guess art does that in many ways... Some people clip the family circus cartoons and love them to death... I simply want to find death sooner after reading them.
Reply

@COLOURlover
What a great way to put it, agree totally.
Reply

A couple of months ago, Rothko was singled out by the Wall Street Journal because his modern acrylics are already starting to fade, as compared to oil paint by the old Masters. In another 100 years, the joke will be over.

Darius, I know what you mean! Most people would never tell Bil Keane that what he does is not worthwhile comic art; they would just say, "It's not my kind of humor." But people will look at a Rothko and say, "Is this supposed to be art? What is the point of this?" People who don't create or thoroughly appreciate art feel free to criticize the merits of ostensibly simple art. But their dislike for it is likely due to not understanding it... like me and Family Circus or Marmaduke or something.

I have to admit that, when I was younger, I couldn't be bothered to stare at a Rothko for more than a few seconds, but the longer I toiled at my own painting, I found myself falling in love with a certain line or square I'd painted, and loathing entire complex, long-labored works, whereas others saw precisely the inverse.

The quality which breathes life and value and merit and legitimacy into a work of art is impossible to nail down, but one day a Rothko struck me and I suddenly understood. I believe that not just any person could paint squares and stripes of this nature and lend them any validity. I don't know if it's Rothko's substance, method, or simply his timing that lends his work credibility.

The avant-garde and I do not always get along, and I still don't like most of Rothko's stuff on an aesthetic basis, but I'll tell you for sure that he has said some of the most poignant and astute things about art that I've ever heard.

“We assert that the subject is crucial and only that subject matter is valid which is tragic and timeless.”

Darius didn't know what he had. I turned Colourlover's color "white" into art:

Why do we even need over 2 million possible colors here? Just go with about 10, then.
Reply

After paying entrance fee for the High Museum of "Art" in Atlanta, one primary piece was a sort of a small wooden pyramid placed in the middle of the floor so you could trip on it. I wonder whether they got sued?

Another was a 4' x 8" sheet of plywood leaning against the wall. It was a "handmade" made plywood by the artist, instead of a commercially manufactured item. The plaque didn't say whether he grew his own trees and waited 30 years.

I haven't been back to see the pile of car bumpers, either. Something I threw away in the last 10 years might be on exhibit.
Reply

You sound like the guys that say star trek sucks, never knowing that it inspired many key technologies we have today. Like the thing you're looking at right now.
Reply

That is to say that Rothko has spawned a huge number of creations, not the least of which is this site itself.
Reply

When I was fourteen I used to wonder what was so brilliant. But now I admit I GEDDIT! It's just beautiful.
Reply

Star Trek is too new. I just finished watching the 1929 sci-fi movie Frau im Mond/Woman in the Moon, which inspired the launch countdown itself. The movie was minimalist in being both silent and in black and white.
Reply

In re: the fading thing, keep in mind that Rothko actively declined to coat works in varnish, in particular the murals he installed at Harvard. Whatever his motivation for not sealing his works, he had to have known how vulnerable it would make them. Any artist worth his salt would consider the longevity of his pieces, and I'd venture to say it was probably intentional and not an oversight.

I understand the desire to let a piece of art deteriorate over time - it's legitimate to consider a work of art to be perpetually "in-progress," be that from actively tending it or passively allowing it to decay, like an organism would. It allows an artist's work to continue to develop posthumously - quite a feat for a legacy.

Rothko also relied heavily on lithol red, a highly unsustainable pigment. Acrylics by nature aren't usually as volatile as lithol red, and plenty of lightfast hues are available, as are protective coats. I concede that the overuse of lithol red and other experimental paint mediums was probably not a liability that Rothko considered, but the choice of acrylic over oils isn't in itself the sole culprit.

But I think it pays to attempt to consider them for what they are now, ruther than what they used to be, and maybe even find some new qualities there.
Reply

Slashing his wrists with a palette knife at age 67 prevented Rothko himself from fading.

Minimalist art and music seem to be intertwined.

On September 16, 2000 the Rothko Chapel was placed on the National Register of Historic Places.

One of Morton Feldman's best known pieces of music was inspired by and written to be performed in the chapel — it too is called Rothko Chapel (1971). The musician Peter Gabriel named the song Fourteen Black Paintings after his experience in the chapel. [1] Independent singer-songwriter David Dondero also has an ode to the site titled Rothko Chapel (2007).
Reply

"We assert that the subject is crucial and only that subject matter is valid which is tragic and timeless. That is why we profess spiritual kinship with primitive and archaic art."

That was one quotation about the timelessness of his art. His biography shows a lot of tragedy and indifference. He may just not have cared or thought about how long his ephemeral experimentations would last.
Reply

That is to say that Rothko has spawned a huge number of creations, not the least of which is this site itself.

The palettes and Copaso palettes (above) of solid colo(u)r strips do show a Rothkoesque derivation. If they came from some other artist, we all might be using paint by number or "happy little trees".
Reply

Ret, I didn't know it was with a palette knife. That's so cinematic - so melodramatic. You're right that someone in that state might not have been worried about his legacy. When I'm painting in a clear-headed state, I'm usually wondering where the painting might be in 50 years, but if I'm painting to exorcise something, I'm certainly not worried about it.

dunno. Another reference said, "a razor".

I still have this in the clipboard, so will add a happy pattern.

Interesting post and connection between the COPASO application and Rothko. Also a choice selection from the Show Me Your Widths Group.

Comments got a bit windy.
Reply