I'm quite obsessed with delightfully delectable French macarons. Last summer we went to Paris on our honeymoon and it was the best vacation we've ever had! If it weren't for our families and the petty but rather hindering language barrier I was ready to pick up and move there. One of the main reasons was the colorful and heavenly macarons. I wish I had taken more photos of them but we were too busy having them for dessert after breakfast, lunch, and dinner. The History of The Macaroon

Some say they were Created By Italian Monks, Refined By French Pâtissiers.

The first macaroons were almond meringue cookies similar to today’s amaretti, with a crisp crust and a soft interior. They were made from egg whites and almond paste (a combination of equal parts of ground blanched almonds and sugar, mixed with egg whites—today glucose or corn syrup can be substituted). The name of the cookie comes from the Italian word for paste, maccarone (it is also the word for pasta—macaroni—and dumplings).

While origins can be murky, some culinary historians claim that that macaroons can be traced to an Italian monastery. They came to France in 1533 with the pastry chefs of Catherine de Medici, wife of King Henri II. Two Benedictine nuns, Sister Marguerite and Sister Marie-Elisabeth, seeking asylum in the town of Nancy during the French Revolution (1789-1799), paid for their housing by baking and selling the macaroon cookies, and thus became known as the “Macaroon Sisters” (the French word is macaron).
-The History of The Macaroon by The Nibble I may have to take a macaron world eh-hem "research tour". I'd love to eventually do some paintings using macaron color palettes. For now, check out Paris Breakfast's macaron watercolor paintings.

French macarons can be spectacularly colored and flavored meringue Anise Macaroons“sandwiches.” The concept was invented by Pierre Desfontaines Ladurée, who, at the beginning of the 20th century, had the idea to join two meringues and fill them with ganache. The “originals” combined two plain almond meringues with a filling of [chocolate] ganache; but today, ganache, buttercream or jam is sandwiched between meringues of seemingly limitless colors and flavors.
-The History of The Macaroon by The Nibble 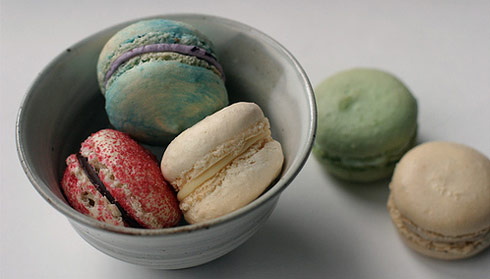 by tell me what you saw 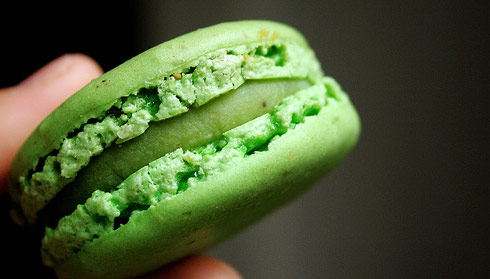 by Canon S3 IS in Paris, France

Make Your Own Macaron Colors

You could even try to make some yourself. Here's a good recipe for chocolate macarons from none other than Laduree via Epicurious. The part I'd love the most about making them would be the embellishments. As you can see from my own photos in the second panel, the French love to top their macarons in berries, nuts, or even powdered sugar.

Or, try the recipe below (click through for details at the Food Network) 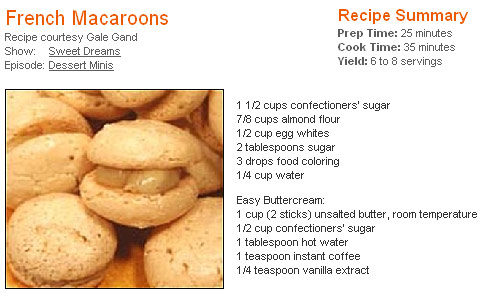 A Colorful feast for the eyes and taste buds! Bon apatite!

oooh! yummy yummy yummy! :D
a feast for the belly and the eyes!
Reply

Those are some crazy-looking macaroons!

simply super! thanks for the recipe. i'm definitely going to try it. i'll colour mine red...
Reply

i want all those right now!!!
Reply

i must try this recipe.

Ooo, I am dieing for a macaroon right now! Thanks for the insight.
Reply

Wow, they look soooo good! I am drooling on my keyboard right now...
Reply

I just hate this posting. I keep trying to convince people around me I am pregnant by some nymphomaniac space alien and that this is the reason I may not be able to see my shoes soon. Since I am male the other theory is that I ate a few too many Christmas cookies. And now this posting. I am so upset I am going to run out and buy something from a Belgian baker here in town. Dammit, just remembered they are closed Mondays.
Reply

OMG. I want a macaroon so badly