I stumbled upon Richard Sarson’s work via Circa1979 and was immediately entranced. His work is hypnotic and intriguing in its complexity created with simple materials and forms. Richard was kind enough to share a bit of his methodology, inspirations, and admit a small fear of colour.

CL: Please tell us a bit about your background:

Sarson: I am a graphic artist living in London. I create work across the fields of art and design and by doing so attempt to question established methods of production and ways of thinking.

CL: How did you find your way into design?

Sarson: I have always enjoyed drawing and I think I was set on an art-based path right from the start. My interest in design has evolved due to a combination of an obsessional personality and a love for composition in art. 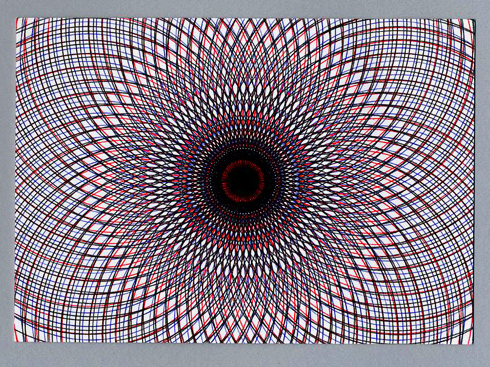 CL: Most creative people tend to cringe or joke about math and science. Your work seems heavily influenced or constructed upon it. What is your take on the relationship between science and art?

Sarson: Often they are seen as opposites, scientific order versus artistic chaos, to me they are very similar in the sense that they are both composed of loose-ends and bits that don't add up. Science and art both have an imposing authority to them but really they are just someone thinking 'what happens if I do that?'. How the microwave was invented is not really that far in spirit from Marcel Duchamp putting a bicycle wheel on a stool and in the process questioning the whole idea of art. I tend to work in scientific way, often I will spend time on a drawing as an experiment simply to see what it will look like, sometimes it is a good outcome other times not so good, then I move on. I like to work on newsprint and use cheap materials because there is no precious, art-like quality about it, each one is an experiment that doesn't really have an end point. 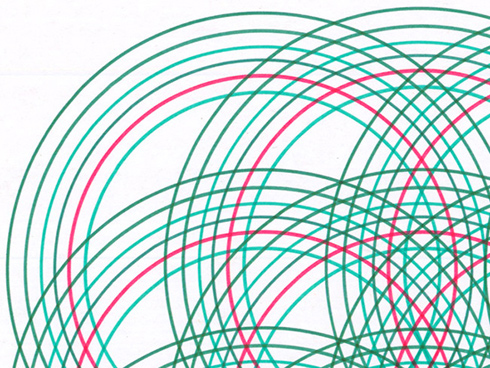 CL: Circles have made a frequent appearance in your work. Why circles?

Sarson: I think the simplicity of a circle is beautiful. I don't intentionally focus upon that shape. My drawings are more about the points where the compass sits; I work in a structured way so the framework is usually the thing most visible. There is also something really lovely about drawing a line and finding yourself right back where you started. 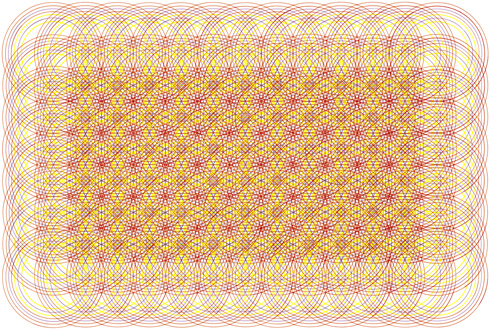 CL: The golden section or ratio has been attributed to harmony and attractiveness -- nature, art, books, music, architecture, the human face... Tell us about the Golden Section and how it is utilized in your work.

Sarson: I admire the concept - one measurement that is perfect. The idea that it could be possible to reduce what the eye regards as beautiful to a ratio or set of numbers is both intriguing and utterly absurd. I think it has been misinterpreted over history and a lot of the examples given for its application are seemingly wishful thinking. I often use an approximation of it (1.618) as a starting measurement to create a grid. That ratio of paper size, then determines every consecutive measurement used for baseline, type size, margin depth etc... from a practical point of view there is a real rhythm to using the golden section because it divides so beautifully into itself always leaving a square and you constantly keep finding these strong relationships between objects on the page. It is also a nod to designers in the past who have applied it so well such as Jan Tschichold and Josef Müller-Brockmann. 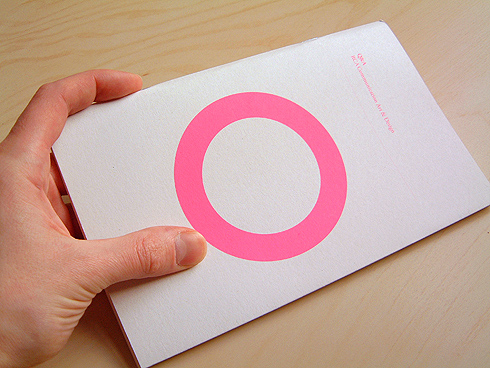 CL: How do you determine the colours used in your pieces? And, how is this part of your design method?

Sarson: A lot of time I am frightened by the idea of using colour because it opens up so many choices and unknown outcomes. I sometimes use it, as in the felt-tipped drawings, as a way of breaking up the rigidity of my work with a rhythmical element. I try never to use colour in a decorative way. It has to have a functional reason for being there. In my recent drawings I use it to differentiate the patterns and separate layers, which makes it easier to see where I am going when creating them. In the book I designed for the RCA graduation show I chose to print the whole thing in neon pink which was a way of contradicting the stiff and rather serious presentation of text. The pink gave it a modern lift even though the design was intentionally classical and minimal. I don't think that you have to necessarily throw the whole colour spectrum at your work in order to get an effective result.

CL: Where do you find inspiration?

Sarson: Everywhere. I love things that subvert or question what is seen as normal also things which dissect a subject. I enjoy reading philosophy, particularly the work of Ludwig Wittgenstein and Immanuel Kant, but equally a journey on the tube or a trip to the zoo can be as (if not more) inspiring. I like to go into the city to watch people in business suits rushing to appointments - there is a kind of insanity to everyday life that throws up enough inspiration for a million drawings.

CL: You have created some 3-dimensional work using thread. How does this differ from works on paper?

Sarson: The idea of using thread was to give the work a more exact, consistent line than a pen. I struggle with the amount of handmade elements I let the work have and sometimes a pen is too rough and obvious. The thread work is basically about a line rotating around a fixed point and most of my circle drawings are based on that idea, I am simply stripping away the circles there. What is useful about the thread and pins is the fact that you can pull it off and begin again on the same surface as many times as you like. The other thing to emerge from using panel pins as a starting point is that it raises the piece from the surface by about an inch and turns it into a relief which is nice because the lines begin to play with light and create shadows.

CL: Any plans to use patterns, yarn or other materials with colour?

Sarson: I want to do some large-scale thread pieces which will involve colour and be free-standing. I am also working on a series of drawings which are more intuitive, using the circle as its own measuring tool - I hope that they might also involve colour at some point. 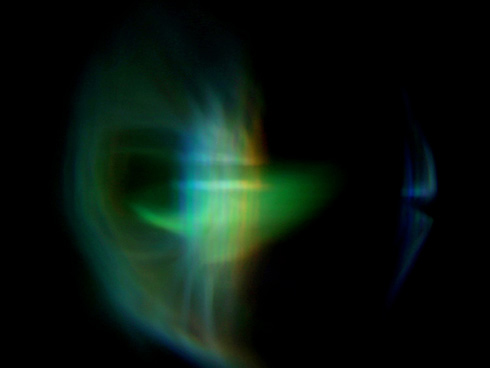 CL: Describe the ideas and results behind the projection series with glass objects.

Sarson: The shape images initially came from a design brief for a corporate identity. By placing a glass object in front of projected light it breaks it into a spectrum of colours. At first I was just playing with a drinking glass, rotating it around in front of the projector and then I moved onto a magnifying glass which was more interesting because it would split the light in a very organised way. I think they sit well in my work as they are a bit more free than other projects I have done in the past. What grabbed me was the idea that you would take something fixed (the light) and by doing something simple to it you can produce a lot of surprising outcomes.

CL: What motivates you to create; to keep pushing forward?

Sarson: The fact that I don't really know what I am doing or why I am doing it. Keeping going means working towards an answer to those questions.

All Image Rights Reserved and published with permission by Richard Sarson.
Copyright Richard Sarson.
A special thanks to Circa1979 for her post leading to this interview.

The fact that I don’t really know what I am doing or why I am doing it. Keeping going means working towards an answer to those questions.

I totally agree, his work is hypnotic and intriguing!
Reply

Wonderful work! It's like fractal art meets spirograph to create something amazingly complex and simple on many different levels.