Hair color has long affected humans' social perception of each other, so it's no surprise that people have gone to great lengths to alter their hair color throughout history – from putting red earth in their hair to risking scalp burns from peroxide.

Black Hair
By far the most common natural hair color, black hair occurs in people of all backgrounds and ethnicities.

Brown Hair
Brown hair is also found all over the world, and is popularly associated with intelligence, trustworthiness, and success.

Blond Hair
Natural blond hair is relatively rare, due to its association with recessive genes. It can range in color from pale platinum to a dark golden shade, and occurs in approximately 2% of the world population, with the majority of natural blonds being of European descent. Since early Christian times, blond hair has been associated with being angelic and youth. Today, it is also associated with glamour.

Red Hair
Red hair, ranging from bright strawberry shades to dark auburn, is the least common hair color. It is most commonly associated with Celtic heritage. Throughout history, redheads have been thought of as everything from unlucky to brave to fun-loving.

Gray Hair
As people age, their hair naturally turns gray and often white. As the body stops producing melanin in the hair root there is a gradual decrease in pigmentation as new hair grows without color.

A History of Hair Dye

Most early hair dyes could only darken hair, and included ingredients such as henna, indigo, sage and camomile. Roman women would dye their hair with a mixture of boiled walnuts and leeks to give their locks a shiny, dark sheen.

Perhaps because of its rarity in nature, however, men and women throughout history have long sought to achieve blond tresses, sometimes with famously poor results. When Caesar brought Gallic captives to Rome, their blond hair sparked a new rage among the brunette Romans. At first, they fashioned wigs made of the captives' hair. Later, women used Gallic pomades made of crocodile or goat fat and beech ashes to lighten their hair.

In the Western world through the Middle Ages and the Renaissance, many types of solutions were painted onto both men's and women's hair and left to lighten hair in the sun, creating the blond color that was popular at the time for its angelic connotations. These mixtures included ingredients as varied as black sulphur, alum, and honey, or saffron and onion skin.

Near the end of the sixteenth century, Venetians ladies would put on crownless hats, apply a caustic soda solution to their hair, and sit in the sun during the hottest hours of the day in order to achieve the famous shades of blond seen in Titian paintings.

Nineteenth-century Parisian ladies drenched their hair in harsh potassium lye solutions. Around 1860, hydrogen peroxide first came into use as a hair bleaching agent. Sometimes combined with ammonia and soap flakes, hydrogen peroxide was commonly used as blond dye through the 1930s. The process was quite harsh on hair, and it was not uncommon for hair to break off during the bleaching procedure. Headaches and scalp burns were also a common side effect.

Hair Coloring in the Twentieth Century and Beyond 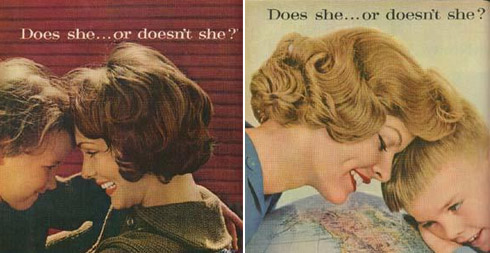 In the mid-20th century, Clairol copywriter Shirley Polykoff helped bring hair coloring into mainstream American culture by coining the tagline, “Does she or doesn’t she? Only her hairdresser knows for sure.” At the time, “painting” one’s hair still carried a stigma that made this phrase resonate with American women of the era – it seemed to say that respectable wives and mothers had the right to color their hair, and to do it with discretion in their own homes. Between the 50s and 70s, when Polykoff gave up the Clairol account, the number of American women dyeing their hair rose from 7% to more than 40%.

In the 1970s, the young ad executive Ilon Specht immortalized the L’Oreal brand when she wrote the slogan, “Because I’m worth it”. Unlike the Clairol campaign, L’Oreal’s appealed to a strong woman who wanted to use hair color to reinvent herself - a sentiment that has carried through to today.

Today, there are four main types (or “commitment levels”) of hair dye available.

Temporary Color
Temporary hair color usually contains only tint, and comes in the form of paints or hair “mascaras”. They are typically made in exotic, bright hues designed to be washed out of the hair after a few shampoos.

Semi-Permanent Color
Semi-permanent products coat hair with color that washes out after 6-12 shampoos. Unlike most temporary color, semi-permanent dyes bond to the hair. However, the pigment molecules in temporary hair color are too large to penetrate the hair shaft, so that hair is still “coated” with color rather than fundamentally changed. Since the dye sits at the surface of the hair, this type of hair color is generally used to achieve brighter, more vibrant shades that may be difficult to achieve with permanent hair color. However, since semi-permanent products don't contain any ammonia or peroxide, they cannot lighten hair, only change the tone of the existing shade by adding color. They are also called "stains" or "washes”.

Demi-Permanent Color
Demi-permanent dyes last about twice as long as semi-permanent color. These dyes have smaller molecules than those of semi-permanent tinting formulas, so are able to penetrate the hair shaft to a slightly greater degree. Like semi-permanent dyes, however, this type of color contains no ammonia and thus cannot lighten hair, only add color to it.

Permanent Color
The longest-lasting of hair dyes, permanent color cannot be washed out. It contains both ammonia and peroxide, which raise the cuticle of the hair in order to allow the tint to penetrate to the cortex and lighten the hair by breaking up the melanin that gives hair its natural color, fundamentally changing the shade of the hair. Since the color is (true to its name) permanent, bringing hair back to its original color requires a new dye job.

About the Author, Parsiri Audcharevorakul
Parsiri is a marketing consultant from Boston, Massachusetts. She shares her own work and writes on design, illustration, and more at parsiri | blog, and likes to hear from indie artists and up-and-coming design businesses. She is also a COLOURlover, of course.

my hair has been dyed just about every color they make, natural and unnatural.
Now I stick to black, but I may let that go and see what color is actually under all this dye.

fascinating article. It makes me want to make some palettes about my past hair colors.

i loved the article.
i'm a redhead and it's interesting to read that everyone has red in their hair :]
Reply

I'm a natural blonde. My hair's getting darker as I'm getting older, but it still lightens up in the summer sun.

I'm naturally a blonde, but I dye my hair red.

Uh... You dye hair, not follicles! The follicle is the cavity from which hair grows!
Reply

everyone calls my hair black, but it's not. it is very, very dark brown. look up close:

Terrific and informative article! It made me somewhat nostalgic for the decade when I painted my hair a variety of colours with many, many, many $10 colour kits.

I dyed my hair that colour earlier... (:

now it's back to its natural dirty blonde. (:
Reply

my niece's former boyfriend had his hair in layers like this:

then there was the one time i dyed my hair. it was a temporary rinse, though, so its gone already. i might do it again soon. hmmm.

Brown here! and loving it! I am brown all over :)
Reply

I only just recently dyed my natural blonde hair to red and kinda regret it, this article helps me figure out how to get it back to my natural colour afterwards. =D
Reply

Very intersting article about the origins of hair color. I've recently changed from being blonde to brunette...a very big change and a little tough to get used to, but I love the rich beautfiul brown I have now!