The Colorful Diwali Festival of Light

Diwali, the major Indian and Nepalese festive holiday, was celebrated just a week ago. With the vibrant colors from this wonderful cultural day still fresh in our minds, we'll take a look at its significance and traditions.

The holiday is celebrated by Hindus, Jains, and Sikhs the world over. Also known as the Festival of Light, it gets its name from the Sanskrit word deepavali, which translates literally to "rows of clay lamps". Though the stories and myths behind Diwali vary across regions, Diwali is everywhere a celebration of the victory of good over evil. It is generally celebrated in October or November, but exact dates vary across cultures and communities. In 2007, it was celebrated on November 9. 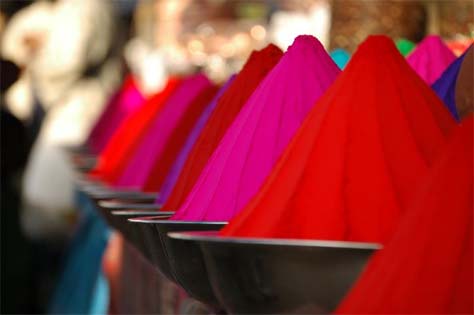 Diwali festivities are spread over multiple days in some regions, during which celebrants explode fireworks, share sweets, and send greetings to friends and family. Women may have their hands decorated with henna designs. Homes are decorated with small lamps and colorful paper lanterns called diyas and kandils, important parts of Diwali decorations. In some parts of India, Hindus also create rangoli, intricate floor paintings made of colored tikka powder or sand. Rangoli designs are made up of an unbroken line, the idea being that there should be no gaps through which evil spirits can enter. Motifs are usually natural – animals, flowers, etc.— though they can also include geometric patterns.

One of the most important ideas in Hindu philosophy is that of the Atman, a kind of pure and eternal “inner light” within each person that goes beyond the physical body. In Hinduism, Diwali is a time to be aware of and celebrate it.

Hindus also have several significant mythological stories associated with Diwali. One of the most popular tells of the epic story of king Lord Rama’s return to the ancient, holy Indian city Ayodhya, after a 14-year exile in the forest and a war in which he killed the ten-headed demon king Ravana. It is said that the people of Ayodhya lit oil lamps to light Lord Rama’s way home in the darkness. 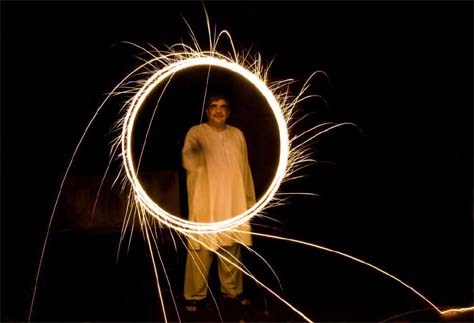 Diwali has a particularly special significance in Jainism, as it is said that the Indian sage Lord Mahavira, who established the central tenets of Jainism, attained Nirvana on this day by the light of the new moon. In fact, Diwali is first mentioned in Jain books in association with this event.

Given Jain asceticism, Jains’ Diwali celebrations are different in many ways from the colorful traditions usually associated with Hindu festivities. Devoted Jains observe fasting and chant the Uttaradhyayan Sutra, which contain the final pravachans (a type of religious discourse) of Lord Mahavira. Some also visit the site where it is said he attained nirvana.

For Sikhs, the story of Diwali is bound up with the story of the Sikh struggle for freedom. Among the most important events associated with Diwali for Sikhs is the release from prison of the sixth Sikh guru, Guru Hargobind Ji, in 1619. In a tradition that continues today, Sikhs celebrated the return of the guru by lighting the Golden Temple in Amritsar.

The Sikh struggle for freedom ultimately came to be centered around this day. After the 1716 execution of Banda Bahadur, one of the most hallowed martyrs of the Khalsa Army, Sikhs started the tradition of holding the Sarbat Khalsa (the supreme decisionmaking forum for the Sikh religion) on the first of Baisakh and at Diwali.

About the Author, Parsiri Audcharevorakul
Parsiri is a marketing consultant from Boston, Massachusetts. She shares her own work and writes on design, illustration, and more at parsiri | blog, and likes to hear from indie artists and up-and-coming design businesses. She is also a COLOURlover, of course.

Very cool! Thanks for the great article!
Reply

Beautiful pictures. I love the warm lights. Too bad you can't put a sixth color in there. The green is missing. ^^
Reply

Thanks! I have celebrated(enjoyed) this article.
Reply

A beautiful look into the lives of others. Thank you.