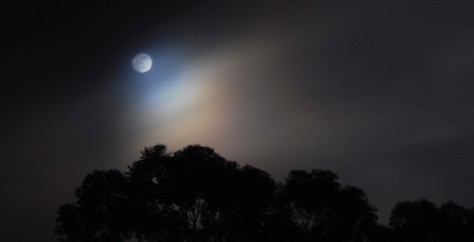 Moonbows: Colors of the Night

Just as the sun illuminates rainbows during the day, reflected sunlight from the moon can reveal moonbows and moon halos at night. The most favorable time for a moonbow to appear is during a rain shower opposite a full or very bright moon. The night sky needs to be very dark, and moonbow watchers should stand with their backs to the moon. The colors of the moonbow will be dim pastels, in contrast to the vibrant hues of a daytime rainbow.

A moon halo, on the other hand, is visible near the moon itself as a result of moonlight scattered through ice crystals in very high clouds. The colors of a moon halo tend to be brighter than a moonbow.

The headlights of a car can create a phenomenon called a fog bow as they illuminate water vapor during misty conditions. Christian Fenn reported "Fogbows are more feebly colored than their Sun illuminated counterparts (rainbows) and usually appear whitish to the unaided eye."

The rainbow appears throughout world mythology as a symbolic bridge between the divine and the mundane. Moonbows remind us that even on the darkest night of the soul, there is a glimmer of promise, however faint. 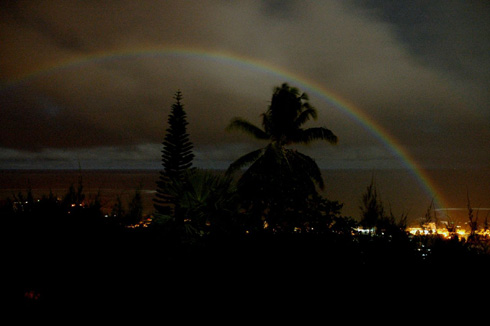 Moonbow over the Pacific Ocean in Tahiti.

After the war was over
I was coming home to you
I saw a rainbow at midnight
out on the ocean blue
—Ernest Tubb, "Rainbow at Midnight," 1946. 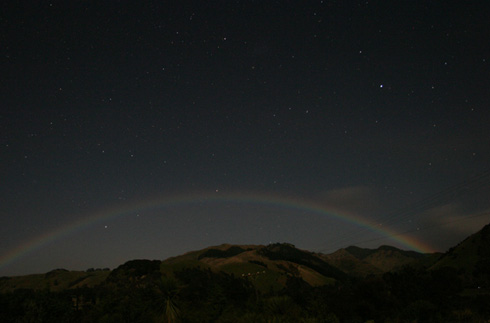 by Thoth, God of Knowledge.

It's flattering to finally see one of my palettes in the CL blog, but, I must admit, in this case, my 'Moonbow' doesn't belong. I titled it before I knew there was a such thing as 'moonbows', so the scheme really doesn't fit with the rest. But, never fear! I will (as usual) force some other, more appropriate palettes on to y'all:

Lovely photos. I have only seen a small moonbow once. It is such a beautiful thing.

These photos are so lovely!
Reply

I have to echo what others are saying -- lovely and inspiring!
Reply

Those images are beautiful.. I've never seen such a thing. Very interesting. ;)