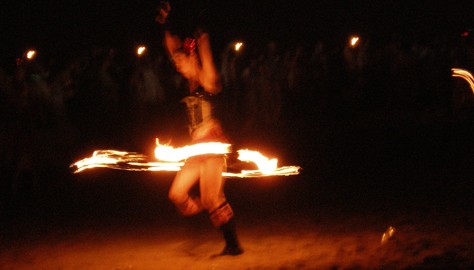 One Night of Fire: All Dressed in White

So, here's why Saturday didn't have a post. Sorry about that. Coordinated by TheDanger, I attended ...

"The Return of the Renegade Parade : Saturday July 14th : Sunset. We begin at 7:57 sharp! In the middle of the Brooklyn Bridge walkway. Dress is white. You are the Angels that keep this city alive and untamed. The more costumed the better. Bring: Drums, parasols, refreshments (discreetly), Music, Gifts to share, Friends, Lovers, and your Metrocard."

I'll admit, it was my first time.

Getting to New York City is easy for me, it just takes longer than I'd like. The moment I was off the train, I was unconciously watching everyone wearing white. "Maybe they're going." I was expecting to speak in code with men in white suits to be directed to undisclosed locations. As the sun began to set, standing on the Brooklyn Bridge brought more excitement as people appeared from nowhere from the event. Moving to the middle, I watched the crowd grow, and it was only a matter of time before the flow of bicyclists wading through the crowd was cut off. An estimated crowd over three-thousand, we passively laid siege on the landmark bridge. As you can see, not everyone wore white, but even the ones that did found wonderfully creative ways of bringing colour in and going white all-out. Encountering many an angel and pixie, among us stood a prisoner, Sinbad, an Arab man, and a blushing bride. Surrounded by people much taller than me, a lot of the tiny trickle of passer-bys was hidden from me, but once darkness fell, we were led by a dragon and a bull horn -- I kid you not -- back towards Manhattan, and with that came the feeling of these being a moving, outdoor party. The parade's performers began to reveal themselves. Called 'coaxers,' drummers and stiltwalkers were the first to become apparent. Our next target, if you will, was City Hall's park. The park has several benches, and space enough to serve as a waystation for our next point. Stopping briefly for a drumming session between a bass drum, smaller African drums, water dispenser bottles, and a sauce pan, a bit of a light show was started. Bolas and hula hoops were radiant with blues, greens, reds, and yellows and the performers using them put on an amazing show. I was also amazed by how in control everyone was, while still having fun, though just as I was thinking that, a number of people jumped into the park's fountain.

TheDanger moved us underground, where we took over the subway platform. I found myself dancing with about twelve others to lively beats laid out by the coaxers while waiting for the R train to arrive. Transferring to the Q after a half an hour on the R and a few dozen chants later in a crowded car with the drumming coaxers, it turns out that we were on our way to bring life, colour, and celebration to Coney Island, which as many of you may know is closing after this year for good. 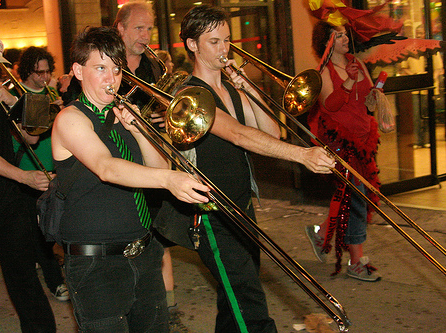 A write-up of last year's parade in the Village Voice explains a bit of the history behind the renegade parade, "For the last seven years, 27-year-old William Etundi has organized renegade art events, Web stunts, social experiments, and billboard modifications under the name Complacent Nation to address the rampant "self-satisfaction and complacency" in America. For Etundi, One Night of Fire is a metaphorical funeral pyre upon which Complacent Nation will be immolated and his latest brainchild, TheDanger, will rise. 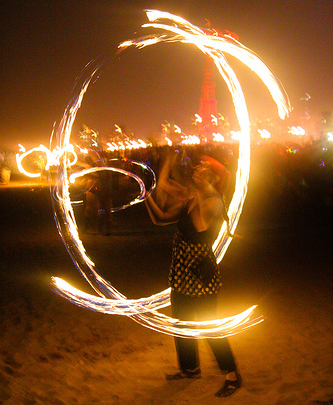 "Complacent Nation was more about activism and culture jamming," says Etundi. "The question has always been: How can we live with integrity within a nation that has gone awry? TheDanger is my answer. . . . We choose to live in a way that is engaged. This is how we keep our moments, our days, and our lives exciting. How we keep our blood moving. It's not political, per se, but it is about putting yourself out there and taking tangible risks." 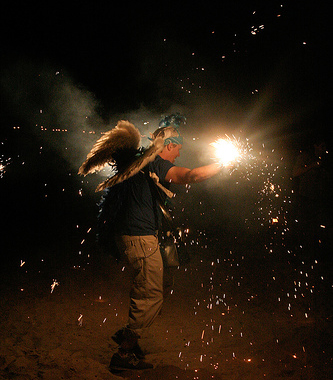 When asked what 'this was all for' while waiting for the parade to arrive to Coney Island, and the answer came without thinking.

"We're just happy to be alive."

oh, i wish i could have been there. sounds like the best party ever. some of your photos reminded me of when i was a majorette in high school (really) and one night each year at a football game we twirled fire. that was soooooooo much fun. i really, really like the last photo of the "angel" with a sparkler.

coney island closed for good? why?!? we don't preserve our landmarks very well in this country. here its all about money. :'(
Reply

Yeah, I'd never heard of it till this year and guess what? I worked all night! But a friend went, crossed the bridge went to City Hall park and then went back to BK. I'll try to make it next year. It sounds like Burning Man in the city, on Bastille Day.
Reply

lizcrimson: It's all about money. Allegedly, the area is being torn down for high-rise condos. I hope it's a joke. There's such magic there.

urbanlatinfemale: Please make it next year. It was so alive. And I didn't see anyone acting irresponsibly. It was just about having harmless fun.
Reply

Oh are you kidding?? I already made plans with my friends, we're going. And I could care less about irresponsibility.