At Home with Five Decades of Color in the US

It is extremely hard to summarize an entire decade with five or six colors, but each of the past 5 decades seemed to carry a common tune. The end to the war-time lack of color in the 50's.

The explosion of color in the hippie loving 60s. The muted colors of the 70's to balance out the brightness of the previous decade... etc. Here we attempt to capture colors common at home for each decade.

With World War II just ending, and comfort finally becoming familiar again, it was time to really end the Great Depression emotionally. The economy was booming, thanks to women showing equality in the work place, and the manufacturing needs of the war. Just as the surfacing of new technologies and chemical advances entered the domestic market, allowing for a broader range of colours for homes inside and out, so surfaced a new optimism, as settling down was an almost dream-like ideal. As optimism might inspire, it seemed it was finally safe to use brighter colours. Oranges, bolder blues, teals, and bright white found their ways into and onto homes. 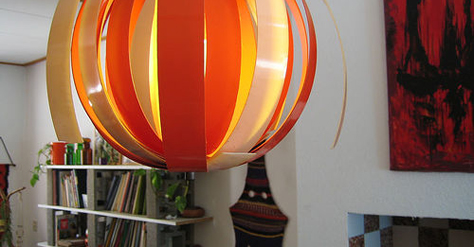 As pride and optimism gave way, rebellion and self-discovery began. Characterized by experimentation and exploration, the 1960s saw everything from civil disobedience to a government-funded lunar landing. It was the start of the revolution against gender and sex, the birth of rock and roll. With the clashing of attitudes and politics, and a new war on the rise, the 1960s might have been the most adventurous yet as both unrest and happiness met with collision. 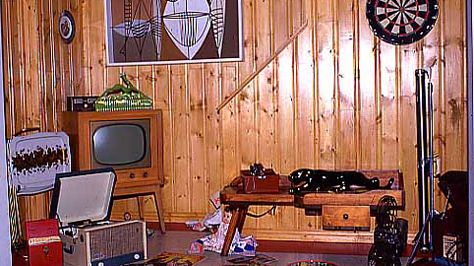 When the 1970s burst in colour ... well, it didn't really burst at all. It almost seemed a gut reaction to its louder neighbouring generation that it would draw from the environment and different cultures for subtle tones. Essentially giving birth to earth tones, the 1970s left us all with wood paneling, brown couches (crossed with darker brown, glittering gold, and soft yellow plaid), and and lots of brown yarn lamp shades. The era itself seemed to want to turn back to nature, to step out of all of the chemicals, the Viet-nam war, anger all together. 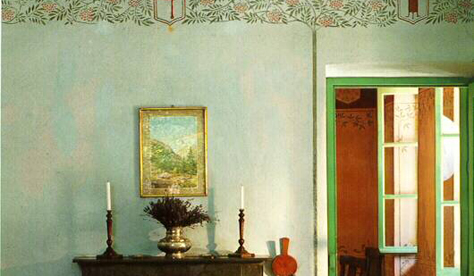 Being the next population boom after the Baby Boomers of fame, the 1980s gave birth itself to new familiarity. Black and white came back as striking as ever. Teals, reds, and oranges stepped up almost as high as the hair styles. At home, the 1980s kept the ideals of the 1970s in mind in terms of the colours being soothing and comforting.

Television shows began to revolve around true friendships, superficiliaty, and taboo subjects all the more during the 1990s. Reality television shows surfaced from MTV. It was a time that revitalised pop culture as well as the interest in and awareness of social differences. It was the first media-based revolutionary generation, and the first acknowldged surfacing of teenage angst. Television itself had become so widely popular in the home, and the internet and computers were well on their way.

With so many throw-back, retro trends coming about, it's hard to pick out this decades defining colours. But even in all its mimickry, and all of its nostalgic designs, something of this decade speak boldly. With the internet reaching a new level in user interactivity, television is nearly obsolete next to computers. Companies competed for Super Bowl XLI commercial space against a consumer-created Doritos commercial. With trends in interior designs using strange lexicons, like 'focus wall' and 'flow,' everything from vivid reds to earth tones seem to call to the individual specifically, and in the decade of On-Demand television shows and TiVos, this should arrive as no surprise.

With the growth of the past fifty years, it seems we're all finally not afraid of colour love anymore.

What would you say are the most common colours in your house?

In which decade do your favoured colours fit?

well with the colors provided I'd say the 70's. actually thinking about it definitely the 70's. I love browns and greens. earth tones are awesome. Also burnt orange has my heart.

my house is rather bland. lots of grey, cream and light blue but our kitchen and bathroom are yellow. a horrid shade of yellow at that. our landlord painted it that color before we moved in and we never got around to changing it in the 13 years we've been here.
My room is the only colorful one. as I've mentioned before it's purple and green. but most of the walls are covered in fake wood paneling. now I love wood, I can even love real wood paneling but the fake wood paneling is terrible. It's kind of a colour nightmare.
Reply

Although my house was supposedly built in the early 80's, I think the colours are very 70's.. quite a bit of it is covered in soft dark blues and cream, with wooden moldings everywhere.
My room is really the only bright one.. it's been pink since I was three, since I've never bothered to change it. The shade pretty much screams 1985. :D;;
Reply

i was there in the pschedelic 60's. i remember the flourescent green, orange and hot pink in the fabrics.
Reply

1970's. I have a lot of neutral colors in my living room and kitchen. My bedroom is VERY 1960's, though. Pinks and blues and flowery scarves.

I always thought of the 80s as having bolder, darker colors. This post inspired me to make my own 80s palette.
Reply

When I think of the 80s....I remember those seeing those gawd awful vans everyone was driving...burgundy and silver-grey...

And the early 90s seem to bring a lot of mauve and federal blue decor...giving way to the late 90s, when everyone was using a lot of wrinkled muslins in sage and tea-stain.

I love to illustrate using bright colours, but when it comes to my surroundings...I like muted colours...greys are never really grey...there's always a whisper of green or lilac...maybe some mustard or ashes of roses.