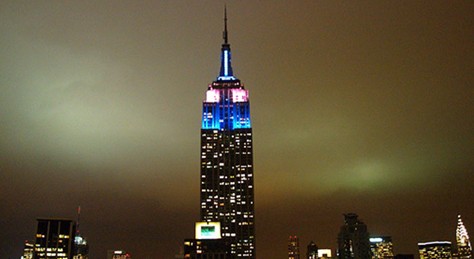 Even at one-hundred-two floors high, the tallest building in New York City isn't above colour love. With the tiered floors near its top, the flat sides are a perfect showcase for its brilliantly colour (yet energy efficient) lights that are changed to coincide with current happenings, holidays, and events.

Typical holiday colours, like red and green for Christmas, blue and gold for Hannukah, purple and yellow for Easter, and orange for Halloween, have graced this landmark build that almost anyone you know will recognise.

The building itself was built in competition with the same architect that built the Chrysler Building, some eight streets uptown.

The lighting schedule is updated constantly, so tourists and New Yorkers alike can know what the colours signify and when they'll be showing.

Are there any buildings near you that change their lights or colour-cycle?

Would you have any representive colour suggestions for the Empire State Building?

Have you seen New York City?

I think the Empire State Building should somehow fade through all of the colours of the rainbow. I highly doubt, however, that it's capable of doing such (especially at different rates on three different tiers) but it would make me very giddy (more than I would like to admit).

I'm fairly certain the idea above was inspired by a particular apartment building (?) I was once taken to visit in NYC that had colour-changing light visible in every window on all three floors. It's one of my most favourite places to find colour in a city environment. Unfortunately, I can't remember where exactly it is otherwise I would recommend it to everyone.

I'll try to get in contact with the friend that led me there originally. Maybe he can refresh my memory.
Reply

The colour-cycling building is the studio of the artist that runs Apex Art, of which is right next door. I believe the address is 269 Church Street. It's on the east side of the triangular hotel ... thing.
Reply

there is a hotel on Ocean Drive in SoBe that goes thru a cycle of colors constantly (minute to minute or so). I have some photo's of it somewhere, I'll post here if I can find them.
Reply

Thank you. It'd be neat to see in person. There's a roof top at the end of the Brooklyn Bridge that does something similar.

The Berkely Building in Boston has lights at the very top of it that tell you either the weather forecast for the next day (red=rain/snow, blue=clear) or the status of the next Red Sox game (red=cancelled, blue=game on).

One time I blinked both red and blue, and that was when the Sox won the World Series in 2004.
Reply

Seattle has a few notable sky-rocketing landmarks that change, too infrequently, with the seasons. The Space Needle, of course, and the Smith Tower. The latter seems to be the truly defining element of 'old Seattle' and if you're old school. If I hear "I remember when the Smith Tower was the tallest building in downtown..."

Purple and yellow sounds spiffy. I wonder if we could get our folks to do something like that. Hmmmm.

It's not quite a colour cycle, but as a gesture against the death penalty, the local authorities of Rome change the colour of the Colosseum's night time illumination from white to gold whenever a person condemned to the death penalty anywhere in the world gets their sentence commuted or is released. The Colosseum has become a symbol of the international campaign against capital punishment.