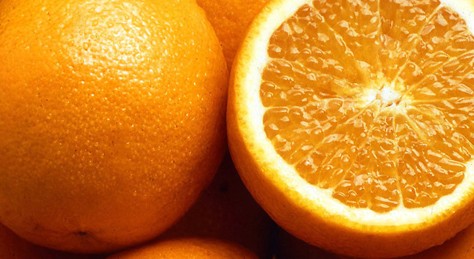 Characterised by joy and creativity, warm like kindness and optimism, orange is a colour that evokes a general sense of wellness. A secondary colour created from red and yellow, it is thought of a colour on the edge and it's no surprised that it shares some of the attributes that red and yellow, its components, carry. It's warmth is stimulating to appetites, and can raise blood pressure if enough red is present.

Always Optimistic
By association, orange is a symbol of wellness and good health because of its correlation to citrus and Vitamin-C rich products. Found in both sunrises and sunsets, it's also a colour associated with autumn, in that it becomes prevalent in leaves as they fall and that Halloween carries orange and black with every decoration.

Orange Variations
Softer oranges can be more friendly than striking. Peaches, for example, characterised by softness is touch and taste, are soothing to the eye. Darkened with black, orange becomes rust, and is rich and smooth, and still holds tight to being stimulating but not overbearing. Past rust is where brown lies, which can be achieved in adding black or grey to the vibrance of orange.

Orange on Blue, ... on red and orange.
Without screaming vibrance, wearing orange is an easy way to be noticed without taking over. Orange goes well with a range of colours. Wearing or decorating with a medium blue to contrast, as blue is opposite orange on the colour wheel, both colours play harmony and melody simultaneously in standing out together. For vibrances extraordinaire, combining this optimism with red or yellow would bring out its fiery tendencies and exude warmth.

Widespread Use
Because of orange's eye-catching properties, it has been used in cautionary mediums. It's high visibility has landed it places in the hands of air traffic control personel or traffic cones to warn of unsafe patches of road. It has since coined names for itself like Dayglow Orange or Safety Orange. It has also politically come to represent opposition, as many uprisings, rallies, and strikes have come to carry it.

What does orange make you think of? Is orange your favourite colour? Where have you used orange before? Have you had any reservations about using it?

How nice, this articles about color symbolism.
Orange, makes me think about energy, power and will. It´s not my favourite, but I use it, when I want to call attention to something. I think the only reservation is "don't use too much!"
Reply

I love orange, and find I keep returning to it. This might be because it is the complimentary to my other great favorites, aqua, blue greens and peacock blue and green colours. Orange is warmth, flame, sun, glowing flowers, and it beautifully balances the cool, strong, growing, flowing underwater colours.

I love the fact that both these sets of colours (oranges and blue-greens) are rich, strong jewel colours but also in-between colours, not exactly a particular shade that can easily be defined.
Reply

Jasmin: I have also found that there can be "too much" orange in some creations ... but I think there can be too much red, and too much blue, too. It is a very attention-seeking colour, but I give it full credit for never being a part of an emo poem. ^^;

klip: It is true that orange is scared to Buddhists, as is red. I also enjoy the same quality in orange that you mention here about the in-between colours. Between you and I, blue is my favourite, so orange and I have been seeing each other more and more.

Thanks for commenting, both of you.
Reply

I do in fact call red-orange my favorite color. I had a sort of orange awakening within the past year. Orange seems to me to be the most elusive of all hues: Purples and greens seem to go forever, but in the realm of orange, don't things seem to go yellow and red so quickly?

It seems the hardest to pin down, particularly in the light spectrum - try to get MS Paint to make a real orange! - and is extremely subjective to the incividuals biases... colours which I would clearly identify as yellow are "orange" to another (note how many 'rainbow' coloured assortments have Red, Yellow, Green, Blue, Purple, the yellow being a yellow-orange. As if there were no need to make two colours of yellow-orange when both colours could be represented with one :)

I do delight in how quickly orange turns to red, however, and I have found that red-orange is the perfect go-to alternative for pure red, which is over-represented in fashion design and the media. Burnt red-oranges, coppers, ambers, peaches and champagnes are a great way to dilute the stigma about orange (it's neon orange's fault). I adore bright orange, traffic cone orange, cingular-logo orange, but the more instances of orange people see that are not neon orange, the more that bias may shift.

Not that I want everyone in the world to love red-orange as much as me... this post digresses.
Reply

I'm definitely with you about orange, lesaint. The warm side of the spectrum does seem smaller, and it's rare that you'll see people wear colours from it. I feel like it's almost that short because people haven't explored it. And I do agree about neon possibly tainting its image. Too long have those obnoxious signs been popular. ;x In fact, weren't they all termed "neon" lights, despite chemical composition? Who wrote that ...
Reply

Although orange is far from a favourite from me, rust is my favourite colour next to red. I'm not really sure why exactly, considering the fact that I disliked orange and most of its variations entirely at one point. Yes, I know, it sounds crazy coming from someone that always says how much she prefers warm to cool.

I feel it's more for work than leisure, either way. Great to use in advertising and signs, but I usually run away from things like orange clothing. ^^;