White Fungus is an experimental arts magazine based in Taichung City, Taiwan. Featuring writing on art, music, history and politics, plus original artworks, poetry, fiction and comics, White Fungus is an ongoing experiment in community media art. As the spores have been released its creators look forward to seeing which way the wind blows. The only thing more uncertain than its future is its past.

ITSOKCOLORWAY from Multi Polar on Vimeo.

For Matthew Hoffman it's all about identity. On the casual outward glance he's a 9-5er, a career oriented young chap, probably unknown to some as...shhhh....an artist. But over wayside he runs Multi-Polar Projects, a rep house for artists Sighn, H. Mathis, Ervin Orion and Mateo. An art collective of four dudes pursing their own separate works. Which is bad-ass alone, yet is ostensibly all very straight-forward, until you learn the entire Multi-Polar Projects crew is just a single person. Hoffman. Which then begs the question, where is the artist and where is the person? And also how? And...When does the sleeping happen?

It's not really a question that needs answering, it's a delightful enough proposition on its own. It's seems to be merely the only way Hoffman knows how to be an artist. It's ingrained in his process and can't be teased out.

What ensued was an extensive back-and-forth between myself, Sighn, H. Mathis, and Multi-Polar Projects. Hilarious because Hoffman's playing all the parts from separate addresses.

Sighn's the moniker responsible, working in his typical text-only emotive style. ITSOKCOLORWAY is the rainbow-hued edition of his ongoing ITSOKAY Project. As the Tweeps and Facespaces erupt with millions of electronic blurbs per day and viral campaign after campaign goes zipping into internet obscurity, he's busy carving pithy witticisms out of wood with a life-long goal of 1 million wooden ITSOKs. It's a permanent snap-shot of communication, forged from materials that once grew in the earth. Part sculpture, part talisman, all parts delicious typography and wordplay, you'd have to be a cyborg not to have feeeeeeelings when taking in the work.

I shot Sighn a request to answer some light-hearted interview questions, and what ensued was an extensive back-and-forth between myself, Sighn, H. Mathis, and Multi-Polar Projects. Hilarious because Hoffman's playing all the parts from separate addresses, poking fun at himself the entire time. In the end it ended up as a snarky not-so-subtle, and entirely unintentional, jab at long annoying email chains. Oh my stars and garters kids, this email at its most artistic (and meta) indeed... For this designer, blogger and typography geek, that's the black hole of perfect.

1. Doodle a story that your son told you: 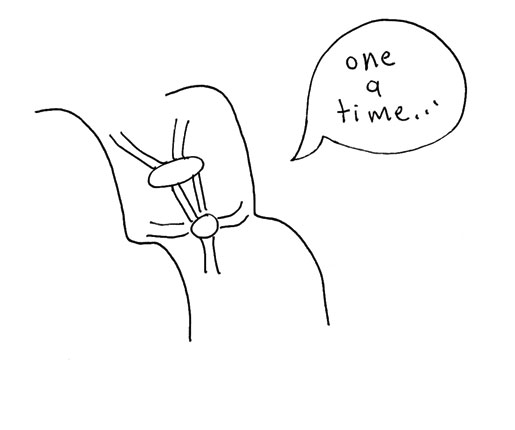 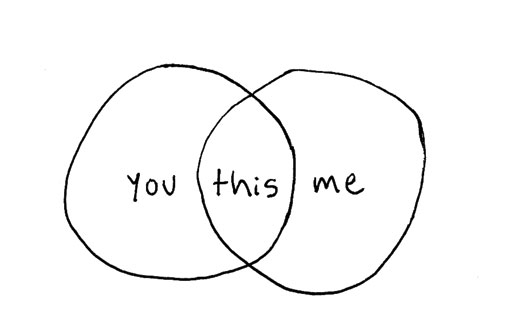 3. Draw a fuck-up that you ended up liking and used in your work: 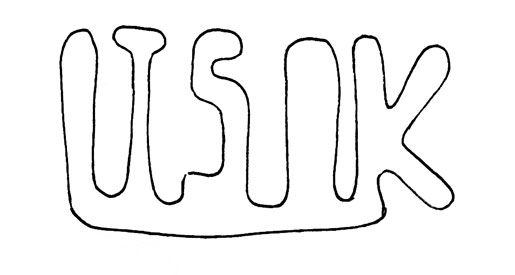 4. What is it exactly that's on the inside? 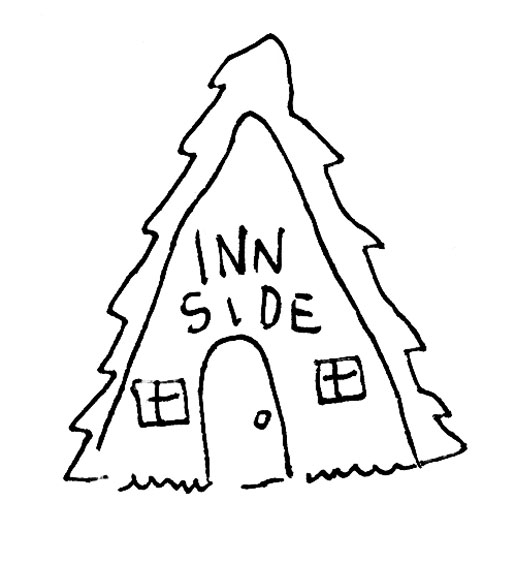 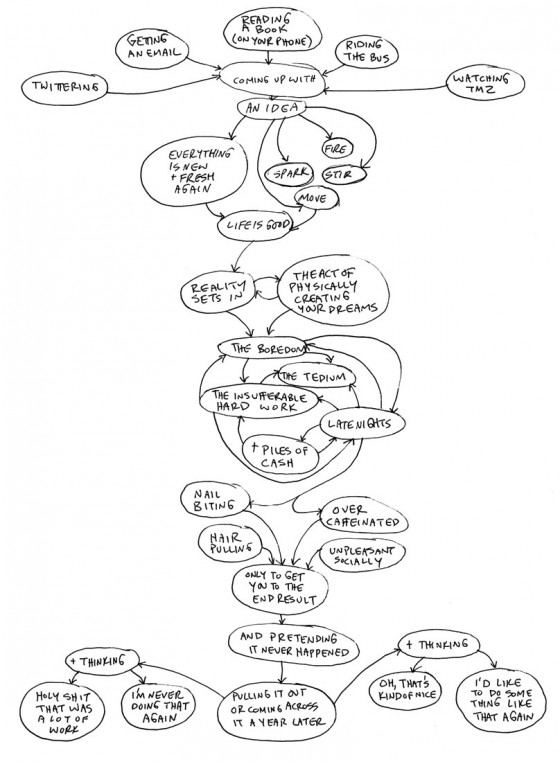 6. A love letter to your favorite snack: 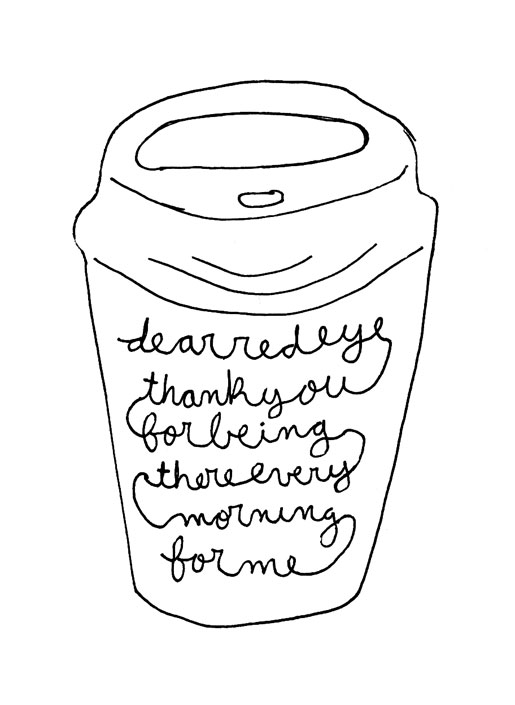 I guess this is what I call reinventing being an artist. Old schooling the new school. And there's no tells just how far this kid can go. It's mayhem! Mania! It's going to rule, bro. Someone please save me from myself, before there's ecstatic-induced vomiting like that kid in Adam Sandler's Big Daddy.

Learn more and order your own piece here. ITSOKs come in 10 colors, plus natural unfinished bamboo or basswood. $20 each.

If you're looking for a gift to give a color lover this holiday season consider one of these classic color books. This is not an exhaustive list (if you have some favorite titles share them in the comments), but we think these are some great suggestions, each packed with valuable information and inspiration. 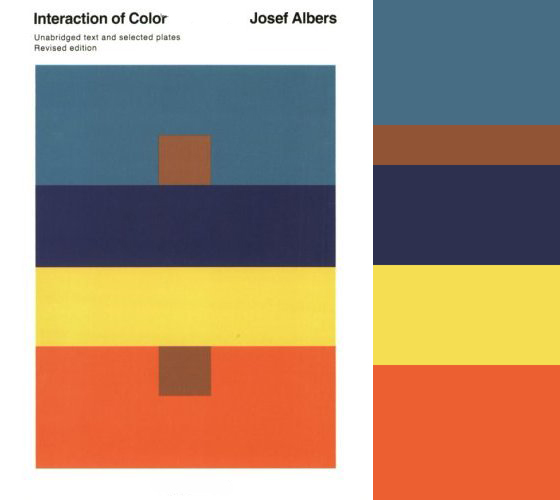 Josef Albers’s Interaction of Color is a masterwork in twentieth-century art education. Conceived as a handbook and teaching aid for artists, instructors, and students, this timeless book presents Albers’s unique ideas of color experimentation in a way that is valuable to specialists as well as to a larger audience.

The latest edition presents a significantly expanded selection of more than thirty color studies alongside Albers’s original unabridged text, demonstrating such principles as color relativity, intensity, and temperature; vibrating and vanishing boundaries; and the illusions of transparency and reversed grounds. Now available in a larger format and with enhanced production values, this expanded edition celebrates the unique authority of Albers’s contribution to color theory and brings the artist’s iconic study to an eager new generation of readers.

We have a lot of love for Threadless, the inspiring community based, crowd-sourced t-shirt company that has been printing the designs of their users, and building a forerunning company, for ten years now. In honor of their ten year anniversary they've published a book filled with some of their best designs, interviews with Threadless members and the history of the company written by founder Jake Nickell.  The Threadless book takes us through the colorful creations of an entire generation of design and t-shirt lovers, the most colorful of them all being the company itself. 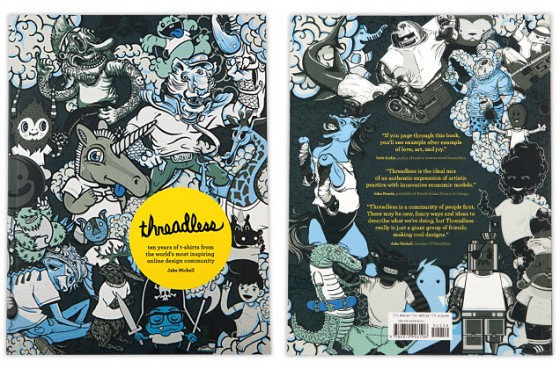 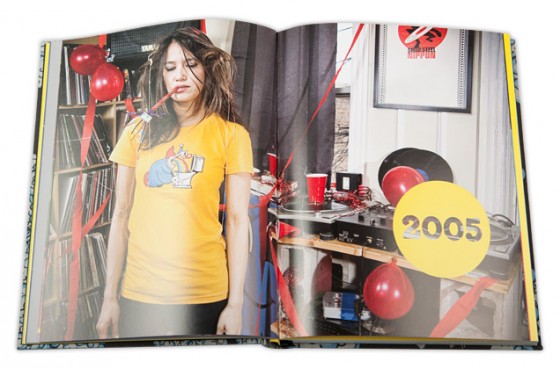 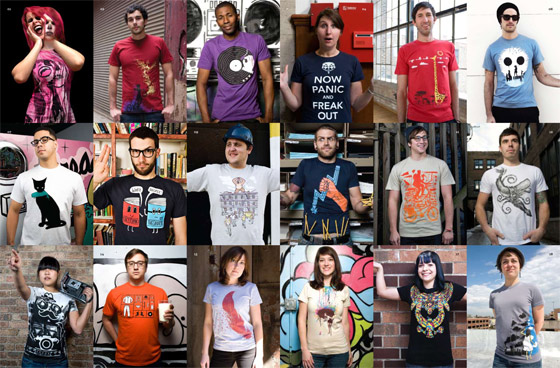 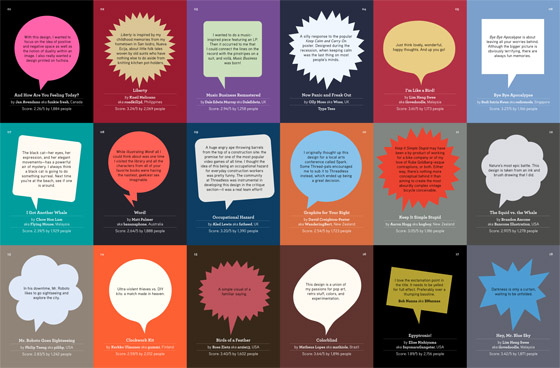 The Exquisite Book is a project based on the Surrealist game called the Exquisite Corpse. The book is a modified version of the game, played by one hundred contributing contemporary fine artists, illustrators, designers and comic artists. 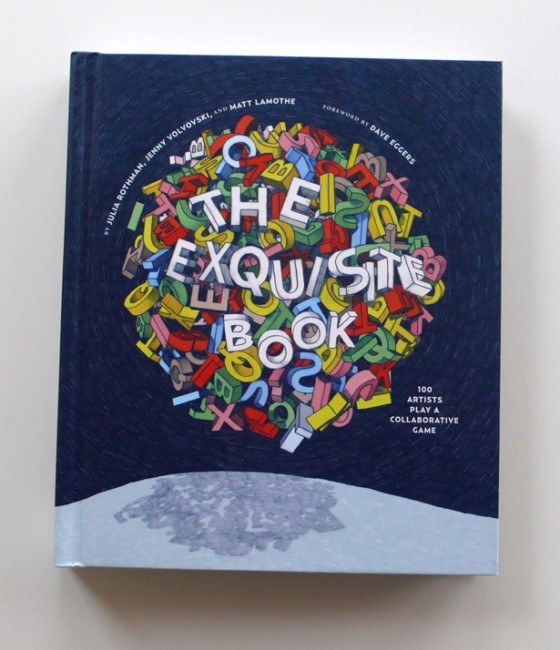 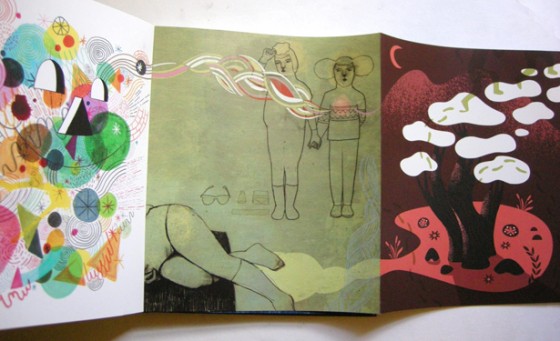 This miniature book contains a complete overview of Irma Boom’s oeuvre, with commentary and more than 450 full colour illustrations in 704 pages with printed edges. Boom is one of the most widely renowned book designers in the world today. The book was designed by Irma Boom for her retrospective exhibition at the The Special Collections of the University of Amsterdam Library.

Boom is known for making tiny models of all her books, which proved inspiration for this tiny book. With text by Mathieu Lommen and notes by Irma Boom. 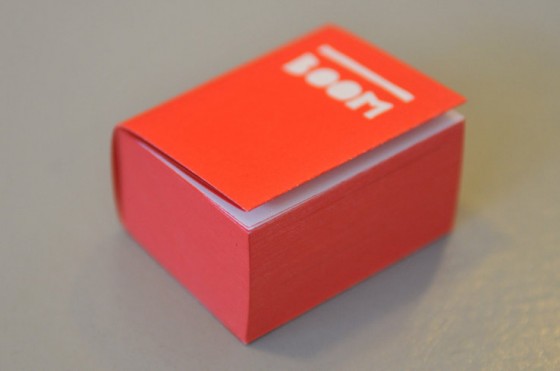 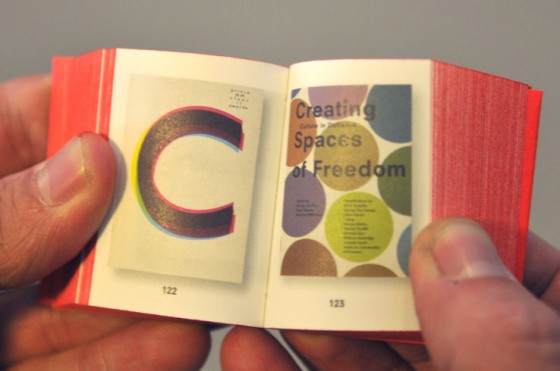 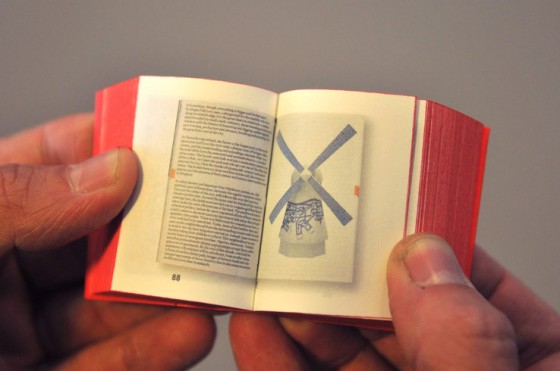 Vera: The Art and Life of an Icon

Legendary designer and artist Vera Neumann (1907–1993) believed in art’s ability to inspire and enrich lives. An innovator and one of the most successful female entrepreneurs of her time, Vera built her company on a radical philosophy: fine art should be accessible to everyone, not just a select few. Known for her iconic images of cheerful flowers, trendy geometrics, and vibrant ladybugs, she believed people should surround themselves with beauty. 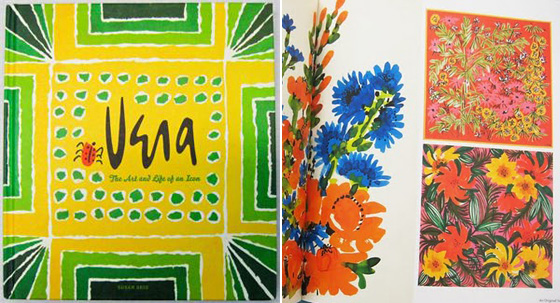 For the first time, Vera: The Art and Life of an Icon, tells her inspiring story through the art and designs she created. In this volume, richly illustrated with Vera’s original sketches, paintings, and photographs of her worldwide travels, readers are introduced to the amazing woman behind the dynamic designs that continue to inspire and influence art, design, and fashion. 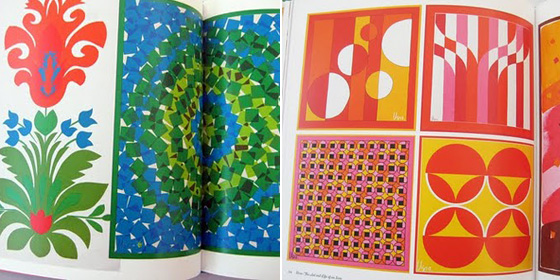 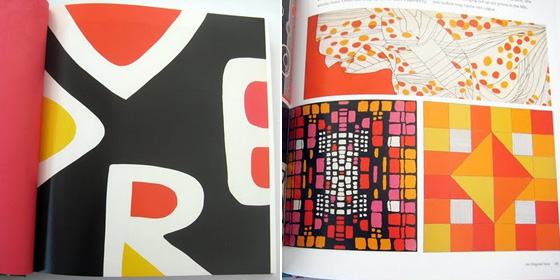 Check out the Color Barcode Multiblend Generator (see examples here), which creates Davis-like veticle stripe multiblends from up to 99 different palettes from the COLOURlovers library. The generator was created by COLOURlover sero*.

Gene Davis was a member of the group of abstract painters in Washington DC during the 1960s known as the Washington Color School. The Washington group artist were among the most prominent of the mid-century color field painters. 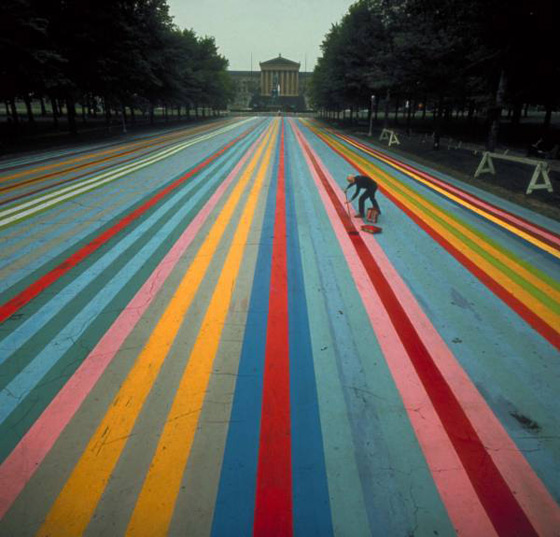 Though he worked in a variety of media and styles, including ink, oil, acrylic, video, and collage, Davis is best known by far for his acrylic paintings (mostly on canvas) of colorful vertical stripes, which he began to paint in 1958. The paintings typically repeat particular colors to create a sense of rhythm and repetition with variations. One of the best-known of his paintings, "Black Grey Beat" (1964), owned by the Smithsonian American Art Museum reinforces these musical comparisons in its title. The pairs of alternating black and grey stripes are repeated across the canvas, and recognizable even as other colors are substituted for black and grey, and returned to even as the repetition of dark and light pairs is here and there broken by sharply contrasting colors.

Her work consists of only the naked human body, often her own, photographed in the most peculiar of positions then painstakingly overlaid using Photoshop to form the familiar shapes of petals, stamen and stem. So familiar the shapes are and so acutely formed that at first glance it is hard to tell that you're looking at naked people. Lastly, but always first in our book, she saturates the forms with stunning color. Her work pays great homage to nature: the beauty of the human figure and the shapes and colors that connect all living things. 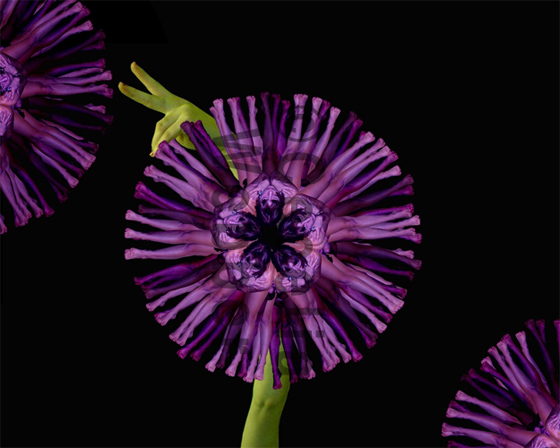 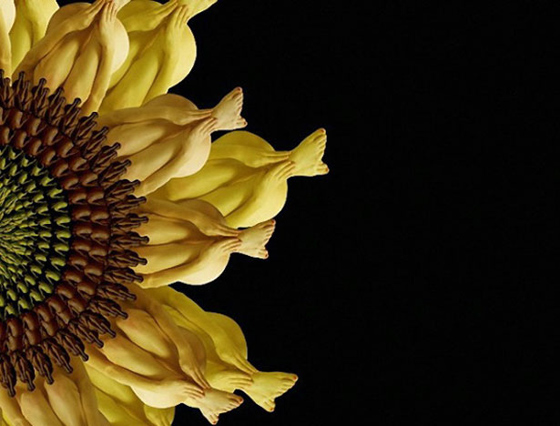 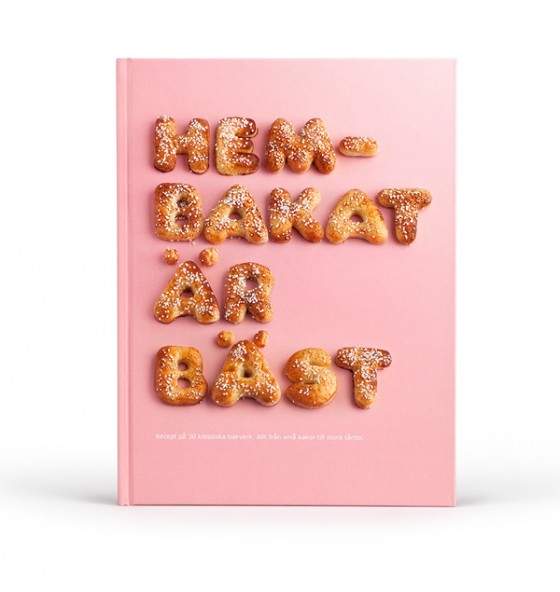 Bet you cool cats haven't seen a recipe visualized in quite this way before, eh? It's new to me too and it's got my mouth a-watering. Ikea's actually behind this delectable book which is called Homemade is Best. It features desserts, all meticulously styled in a way that's completely new to food photography (hat tip to Carl Kleiner for that). Sure, I still want a fat slice of the cake, but now I have so much more appreciation for what goes into it. Makes it seems so much more simple to make, no? 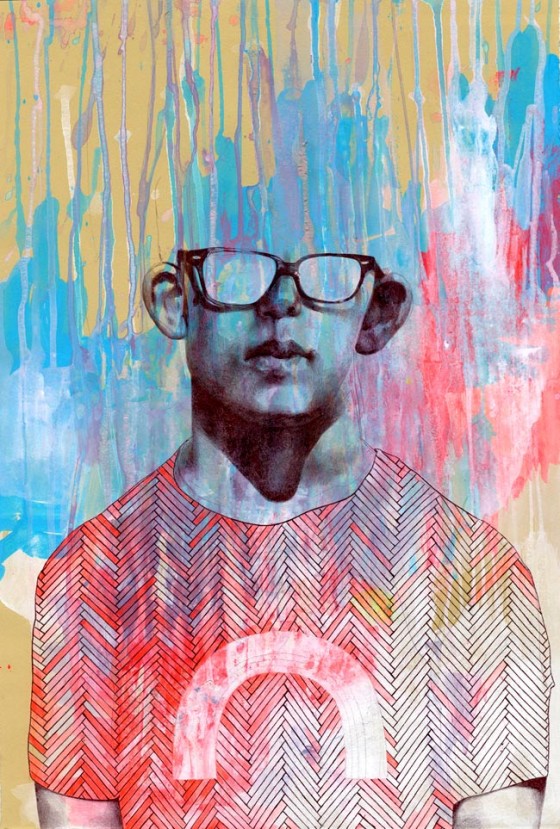 Given some of my previous post subjects, it seems I'm definitely attracted to immensely colorful and heavily patterned artwork. Perhaps it's because it differs so much from my own comparatively minimal & restrained design work? Regardless, I think it's the irrepressible energy of this type of work that keeps me coming back for more. Young Brooklyn artist Morgan Blair is no different with patterns-a-plenty, rainbow colors, and style that easily traverses from illustration to painting to grafitti. She cites Legos, Maya Hayuk, nostalgia and forts (agreed, who doesn't love a good fort?!) as a few of her influences. If you're nerding out over this like I am, frankly, you should drop what you're doing read this interview with Morgan over at Doodler's Annonymous. She actually drew the answers to their interview questions. What a clever monkey.

On first glance Buff Monster and his art present a picture that's the opposite of your typical "grown-up". Giant Mohawk, heavy metal music, graffiti, heck--even a installation of porn-related art. But there's a chink in that facade though, and it comes in the most exuberant shade of pink. It's the kind of color that's hard to hate and it dominates Buff Monster's work. Loud, cartoonish, and fun, even Mohawk-haters would have to agree. So when Buff's rep emailed me to get some press out for his fall openings, I was happy to probe a little more into this interesting artist. 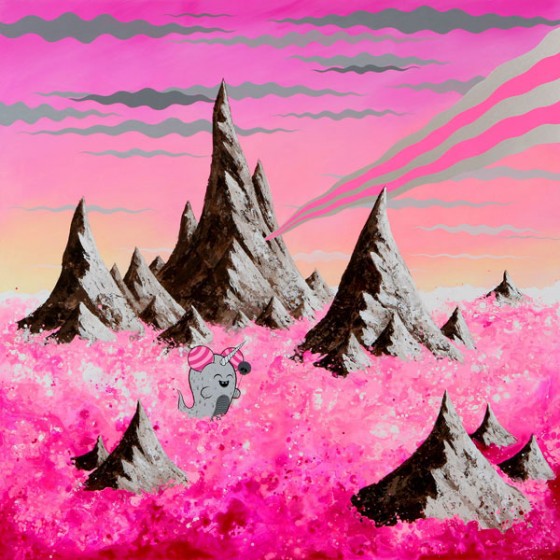 Wandering the streets with her camera Jitka Kopejtkova captures the graphic decay of Prague's event, product and political posters. The fragmented and juxtaposed images in her work reveal not only unexpected color combinations but the age rings of visual communication and the consumer market itself. The indiscriminate combinations of color, shape and form raise curiosities of each individual designer's original intent, and the event(s) which lead to the current state of these ever-evolving public canvases.