The Architectural Review is a monthly international architectural magazine published in London since 1896. Articles cover the built environment which includes landscape, building design, interior design and urbanism as well as theory of these subjects.

The journal was influential after World War II in raising awareness of "townscape" (urban design), largely through the regular articles by assistant editor Gordon Cullen, author of several books on the subject.

Bizarre, Colorful, Surreal, and Beautiful! From the turn of the 20th century comes inspiration from bygone days. Here are some rare circus posters from the U.S. Library of Congress (you have to search for 'circus posters' if you want to see the collection). To see more circus posters check out this other collections here. 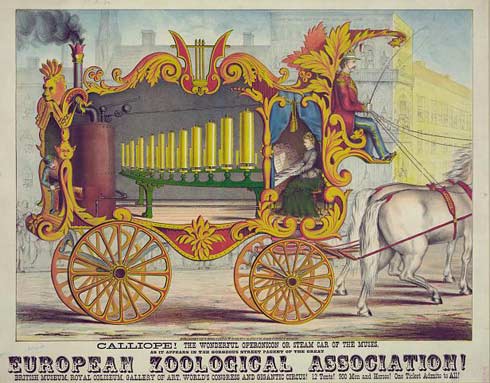 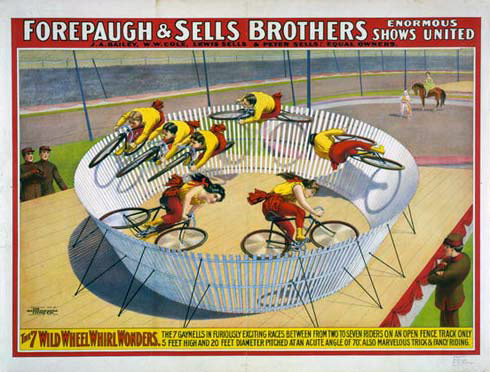 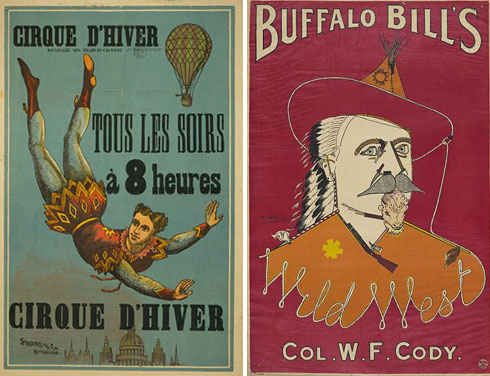 Juaná Gaita (the new course) is a Latvian periodical first published in 1955. It is one of many periodicals that was started during this time by writers who had been displaced by the second World War. The cover palettes and designs used during the long history of the periodical, many directed by Ilmārs Rumpēters, who served as art director for JG during the magazine’s most formative years, perfectly capture the essence of each era in which they were produced. You can see the complete cover collection at the official Juaná Gaita page. 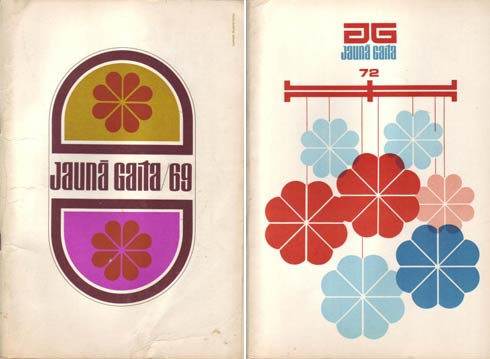 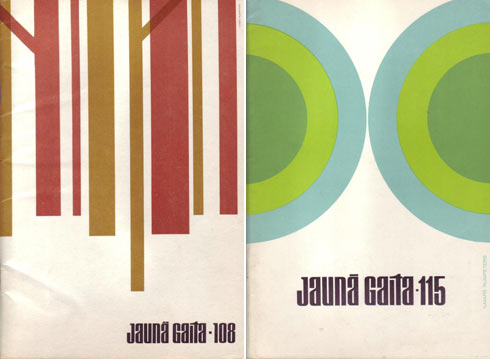 The Colors Of La Mosca

Check out the colorfully inspiring work of Spanish graphic design studio La Mosca. Their distinct style and recurrent use of color palettes, especially in their infographics, is a joy to see. They also have a very colorful feature on their website, mosaic, a guest book with color signatures. Each visitor is asked to choose a color and in turn adds to the ever-changing mosaic. 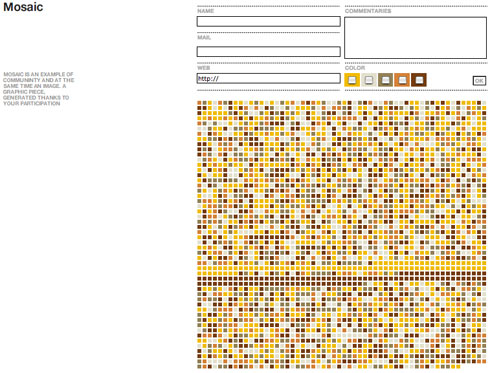 The Colors Of Bob Staake

He is familiar with the importance of understanding the creative process and shares a bit from his with a showcase of personally inspiring posters (a selection of those can be seen here) that have had a large impact on his work and from which Bob has developed his own style from.

Here is a look at some of Bob's work for your color inspiration. You can also read an interview with him here, and see two videos of his drawing process below. 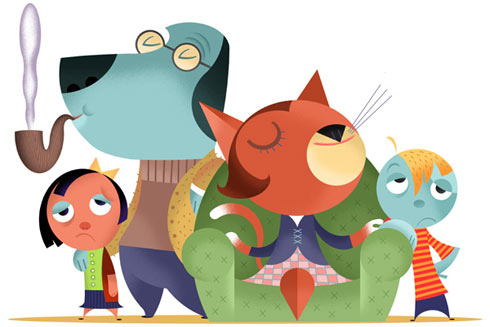 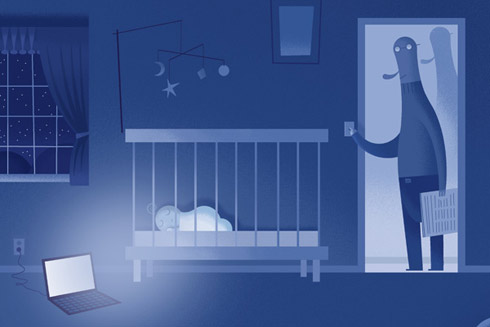 Moo loves print and we love color... so naturally something great will come from us getting together. That awesomely colorful goodness are the new standard and mini sized card packs they just added to their store: COLOURlovers Ready Made Design Packs featuring some great palettes from our site. If you want to mix and match your own pack you can Make a Custom Pack too.

We looked at the top palettes from the last year as well as through some of our widths groups to get a great assortment of width palettes for the new packs. I'll work on adding a list of all the palettes used in the next few days so you can see all the palettes here.

This Is Not A Rainbow

Along with the palettes they've added a design pack of This Is Not A Rainbow. I made a t-shirt with a couple of these designs last year and it's been fun seeing how people react. If it isn't blue, what is it? I think it's a bit "cloudless sky." These cards are fun for sparking conversation about the thing you love and for reminding people that colors are whatever they want them to be. Yellow? Nah... "Man in a Chicken Suit." Green? Nope... "Your Breath Smells Like Grass."

Have you ordered some Moo + COLOURlovers cards? Take a photo of them and let me know where it is in the comments below so I can add them to the gallery. 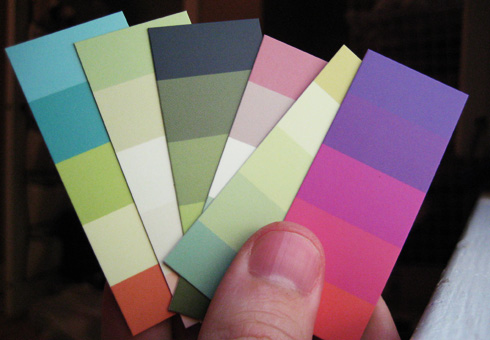 The European comic book scene, particularly in France and Belgium, is very different from that of North America. Vintage covers from these popular titles are particularly striking.

Franco-Belgian comics are comics that are created in Belgium and France. These countries have a long tradition in comics and comic books, where they are known as BDs, an abbreviation of bande dessinée (literally drawn strip) in French and stripverhalen (literally strip stories) in Dutch. The Flemish Belgian comic books (originally written in Dutch) are influenced by francophone comics, yet have a distinctly different style. Many other European comics, especially Italian comics, are strongly influenced by Franco-Belgian comics. 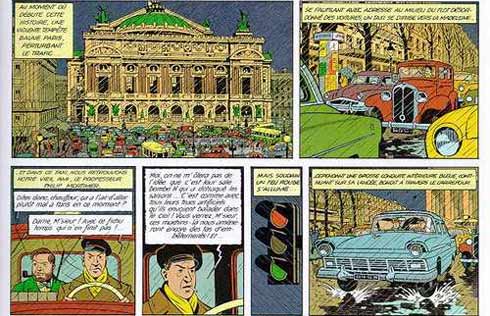 40% of Belgium and France share the French language, making them a unique market where national identity is often blurred. Although Switzerland contributes less to the total body of work, it is significant that many scholars point to a Francophone Swiss, Rodolphe Töpffer, as the true father of comics.

Blake and Mortimer (1946 - ) is a Belgian comics series created by the Belgian writer and comics artist Edgar P. Jacobs. It first appeared serialized in the Belgian comics magazine Tintin from 1946, and was subsequently published in book form by Les Editions du Lombard. It was one of the first series to appear in Tintin magazine.

Designer and art director Nick Dart has an amazing collection of graphic design from the 70's & 80's arcade era on his blog, Art of the Arcade. Here's a selection from his illustration, flyer and logo sections. 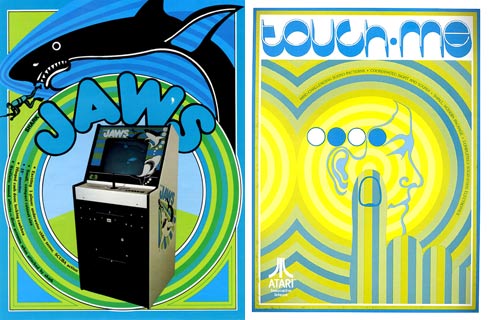 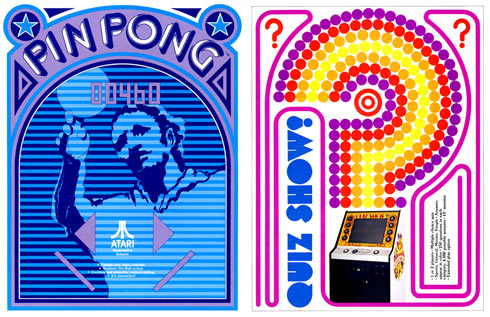 The Colors of Jacques Auriac

Jacques Auriac was a maestro of advertising posters for major brands representative of post-war industrial expansion. He was first inspired to study design after visiting the "Pavillon de la publicité" at the 1937 worlds fair.

A retrospective of his work is available if you can find it. Here's what grain edit has to say about it: