Started in 1934 by Malcolm Wheeler-Nicholson, DC Comics, then known as National Allied Publications has created some of the most colorful characters in Comics. The abbreviation "DC" came from their first popular illustrated series Detective Comics which introduced the darkly colored character Batman. Since then, DC Comics has become one of the largest publishers of English language comic books. Here are a few of their classic characters who have frequented the shelves of comic book stores throughout the years.

The Colors Of Global Brand Identities

Today, more than ever, companies need to separate themselves from the others who share the same crowded marketplaces, and it is being done with branding and creating a unique and easily recognizable visual identity. The visual identity of a business can be one of its most valuable intangible assets, and big part of that visual identity is color.

Referring to Business Week's 'Best Global Brands 2007' (link to PDF) report, which ranks "brands which place high importance on managing the economic value of their intangible assets, and primary their brands, consistently out preform basic economic measures," we selected what may be the most easily identifiable logos in the corporate world today, then stripped them of every line and gradient to pullout just the color palettes. See if they are just as strong without the logo itself.

The Colors Of Skateboard Art

With more and more artists being commissioned to create original work for some of the largest skateboarding companies in the market, the skateboard deck is becoming a highly sought after medium by both artists and collectors. We thought we would take a look at some of the more colorful decks currently influencing both skateboards and art collectors. The images from Chocolate and Alien Workshop are accompanied by the writing of Sean Cliver as he talks about his life as a skateboard designer and his inspiration behind Disposable: A history of Skateboard Art, his current book highlighting over 1,000 skate board graphics from the last 30 years. 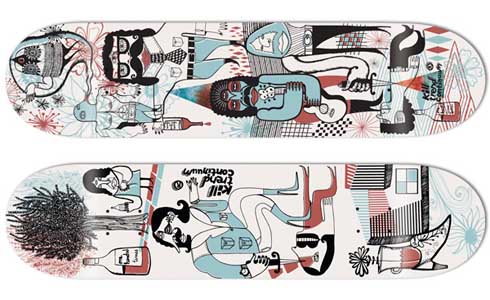 Disposable: A history of Skateboard Art: The Making Of

In my late teens and early twenties, my attitude was all piss and vinegar,
and the only time worth living or acknowledging was the present—
the classic attributes of any skateboarder, I guess. Then, without
even realizing it, 15 years passed and I found myself going, “Whoa,
how the hell did that happen?!” With this spatial wedge of time driven
between my insolent years of youthful abandon and present state of
being (which now includes a wife, son, and slightly more long-term perspective
on life), I fell into a pronounced period of reflection—mostly just
wondering how I made it out alive. Leafing through my catalog of memories—
an increasingly difficult thing to do living in California, where seasons
are nonexistent and the endless sunshine bleaches all recollections
to an indiscernible haze of months and years—I established the
one constant in all my prominent life experiences: skateboard graphics. 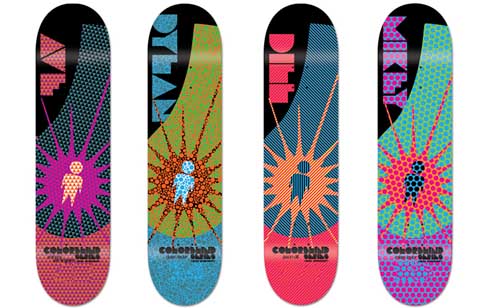 To make a long story short—at least for now, that is—I was just an
average kid from Wisconsin who first staked his claim in life on art and
then years later skateboarding. The combination of these two elements
ignited an unbelievable journey that would first and foremost involve
winning an “art contest” advertised by Powell Peralta in 1988, whereupon
I moved straight from the sticks of the Midwest to the spasmodic
heart of the skateboard industry in California. There I somehow managed
to live, thrive, and survive as an artist throughout one of the most
amazing and tumultuous eras in the history of skateboarding, when
graphics transformed into formidable marketing tools and pushed all
possible boundaries from sex, drugs, violence, race, religion, politics,
and copyright laws. 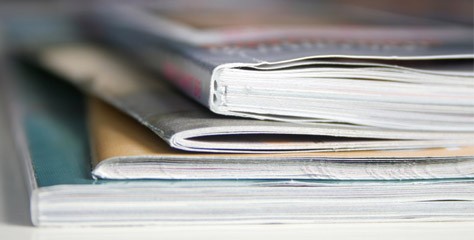 Armin Vit at Speak Up took an amazing look at the 25 movie posters of the top grossing movies of all time.

Not only did he organize the top 25 posters and break them down to simple palettes... He even created a larger image that showed the percentage of color usage for each film rating. Mr. Vit might just be our new best COLOURfriend.

Armin: "I looked for the final theatrical posters - as opposed to teaser or character-specific posters — which most fully represented what people saw on the streets or in movie theaters. Once lined up, I went over them one by one selecting a) the overall or background color, b) one or two of the most visible colors, and c) one or two accent colors. Ignoring any minimum-impact colors along the way. After picking out the colors, I arranged them, via gradients, on a horizontal bar, using the background color as the base and then eyeballing the "amount" of the rest of the colors to create an approximation of the colors you would see if you squinted at the poster or if you had really blurry vision." 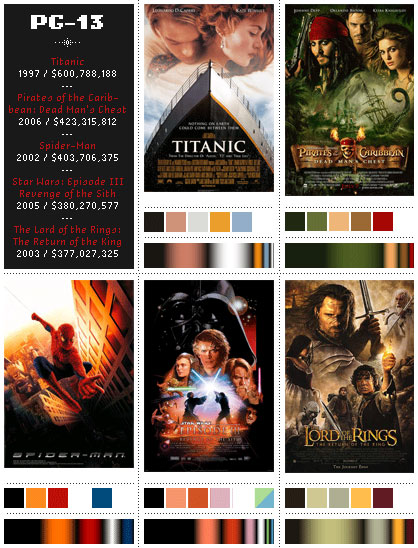