Imagine a world where anything is possible—where dogs sport a luscious coat of pink fur, green cats preen themselves with zebra striped tongues, ruby red snakes have glowing purple polka dots, and rainbow spotted elephants spray orange slices from a mile long trunk. This is the world that Eric Carle dares his readers to imagine.

This article is presented by the leader in business card printing with fast turnaround times, Next Day Flyers.

Eric Carle was born June 25, 1929 in Syracuse, New York. When he was six years old, he and his parents moved to Germany where he grew up and eventually graduated from Akademie der bildenden Künste, a prestigious art school in Stuttgart. He never forgot his American roots and returned to the place of his happiest childhood memories in 1952. 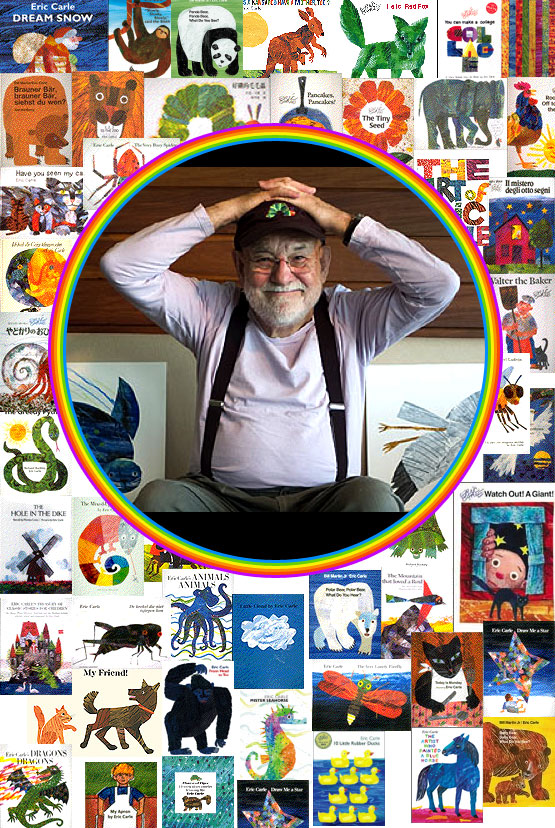 Inspired at a young age by German artist Franz Marc, who is known for his paintings of blue horses, Eric Carle has illustrated over seventy books, many of which he also wrote. The following are some of his most memorable contributions to children’s literature. 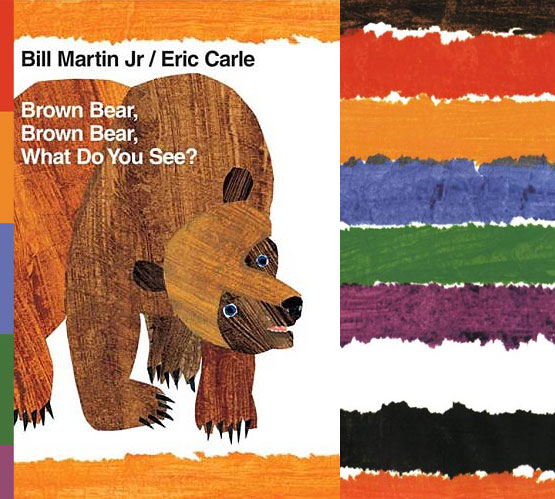 The first book Eric Carle illustrated was titled Brown Bear, Brown Bear, What Do You See? Published in 1967, its bold and colorful illustrations brought a fresh look to children’s literature. 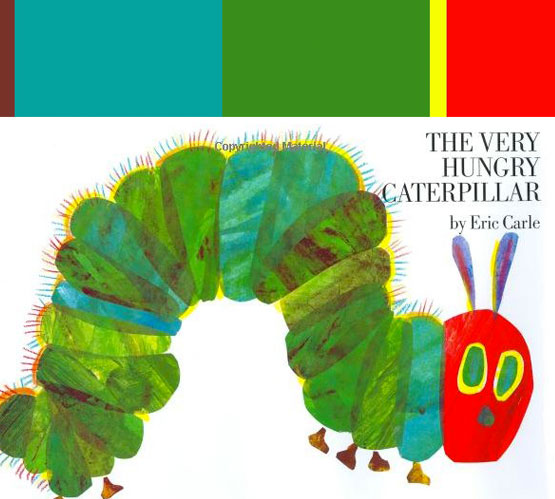 In 1969, The Very Hungry Caterpillar quietly began to work its way into all of our hearts. By far his most well-known children’s book with over 22 million copies sold, it has been translated into more than thirty languages and has graced bookshelves for over forty years. 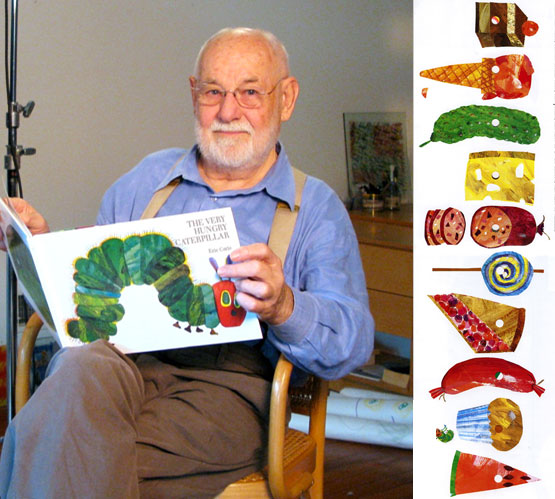 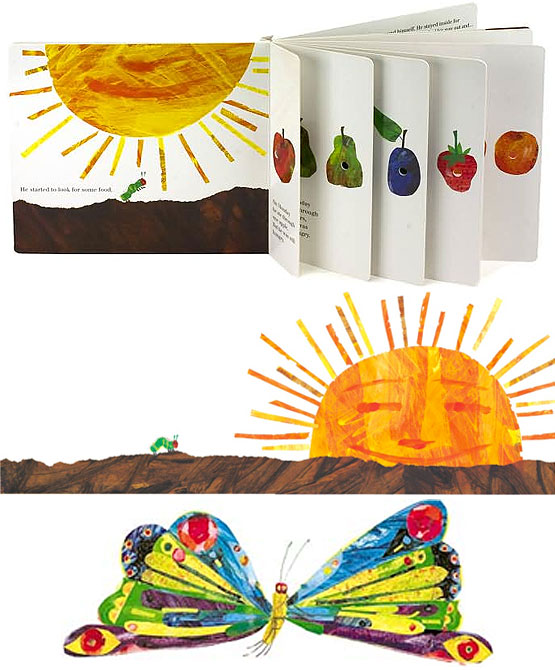 So, what is the magic that makes this book popular even to this day?

Is it the simple story of the life cycle depicted in the form of a tiny insect? Is it the fact that it teaches the days of the week, counting, and good nutrition paired with interactive die-cut pages? Is it the suggestion that we are all a bit like this little caterpillar and will one day turn into beautiful butterflies? Maybe it is the vivid illustrations themselves, which startle the senses and spark the imagination. Whatever the reason may be, it stands true that The Very Hungary Caterpillar is a worthy example of how far a little imagination and creativity can take you. 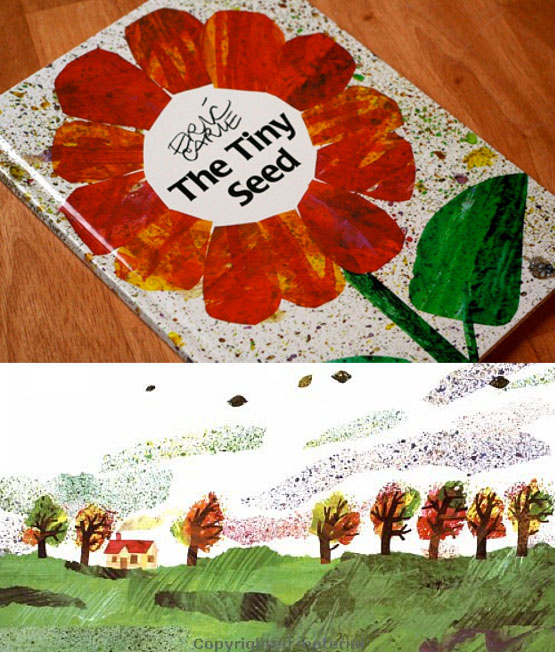 The year 1970 brought The Tiny Seed with its collage illustrations accompanied by simple poetic text that demonstrate the enormous potential of one tiny seed. 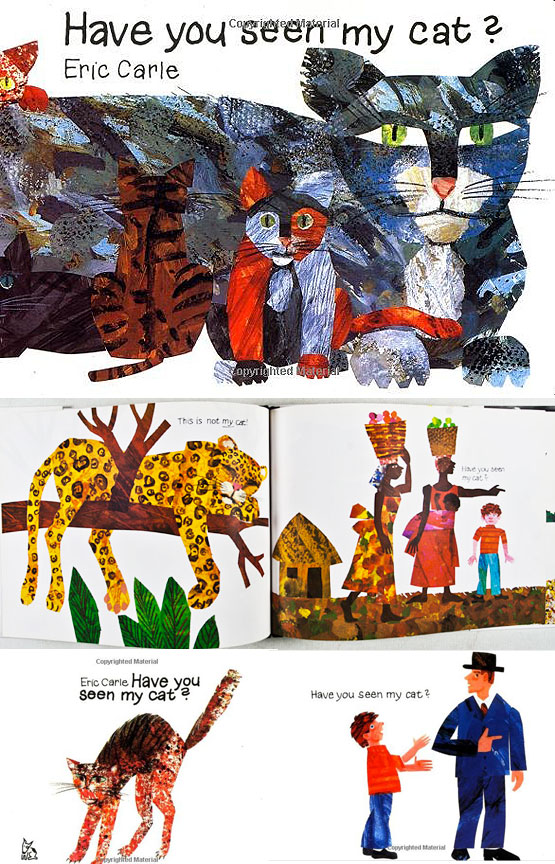 Have you seen my Cat? by Eric Carle (source |  source | source)

One of my personal favorites, Have you seen my Cat? takes the reader on a journey through distant lands where wild and domesticated cats alike adorn the pages in Eric Carle’s classic illustrative style. Published in 1973, the pictures more than the text lead the reader from page to page searching for a boy’s beloved pet. 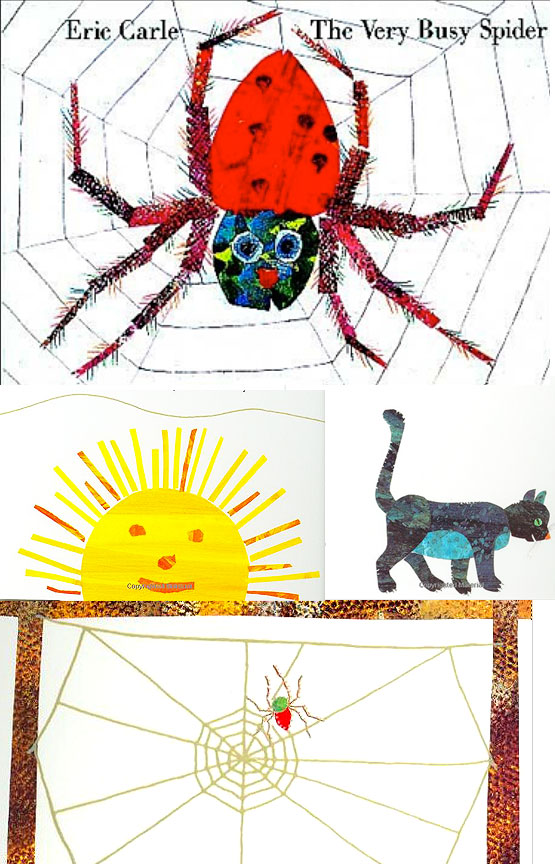 The Very Busy Spider was published in 1984. Its striking illustrations are enhanced with a raised printing technique that allows readers to enjoy the story by sight, sound and touch. 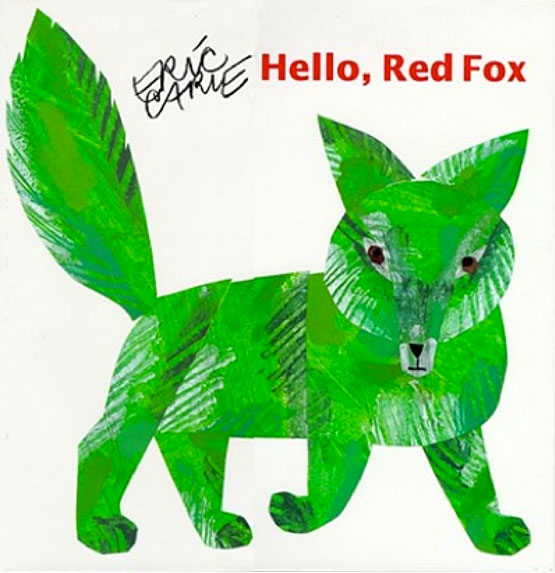 Published in 1998, Hello, Red Fox is a colorful book with a lot of surprises. Eric Carle’s illustrations take readers on a journey to discover complementary colors.

Featuring amazing rainforest illustrations,“Slowly, Slowly, Slowly,” said the Sloth was released in 2002. Eric Carle was inspired to write this book at a time when his life was very hectic. He got fed up with it one day and after locking himself up in his studio he began to work on this book. It now stands as a reminder to us all to slow down and take a break sometimes. (source) 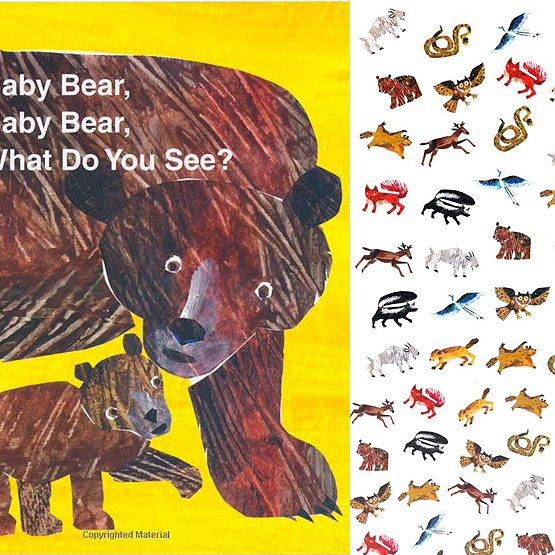 Baby Bear, Baby Bear, What Do you See? by Eric Carle  (source)

In 2007, Baby Bear, Baby Bear, What Do you See? hit the shelves. If you will remember, Eric Carle started his career with a book with a similar title, but from the adult bear’s perspective. Thinking it would be a nice way to sort of round off his career, he got back together with Bill Martin Jr. and illustrated this children’s book. Little did he know that he wasn’t quite finished with his career… 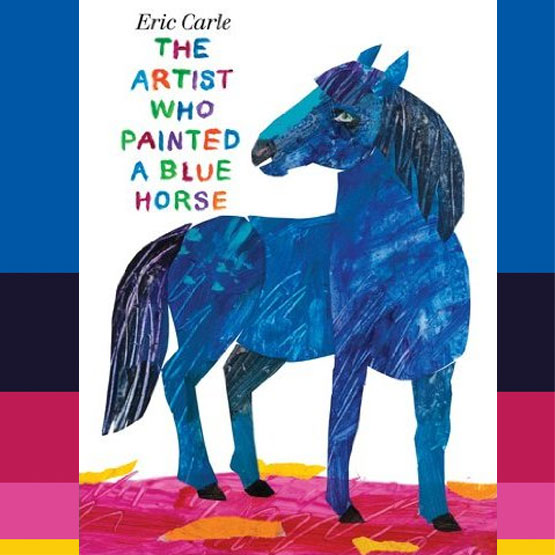 The Artist Who Painted a Blue Horse, by Eric Carle (cover source) 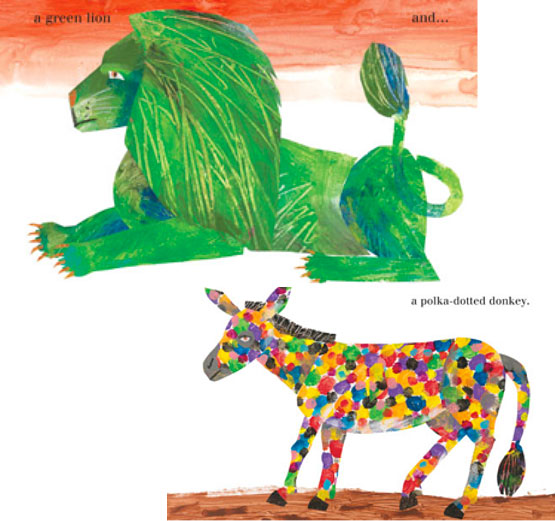 Eric Carle’s The Artist who Painted a Blue Horse came out this year (2011) as a stunning illustrated book that truly explores and encourages a child’s imaginative potential. The first page displays a little boy holding a paintbrush saying, “I am an artist and I paint a blue horse.” Subsequent pages are illustrated with a whole zoo of unconventionally colored animals, and concluding with the little boy again, this time saying, “I am a good artist…” The addition of one powerful little word to the sentence expresses Eric Carle’s deep belief that the imagination cannot and should not be hindered. In fact, his own creative process is a testament to this. (source)

Eric Carle in his studio (source) 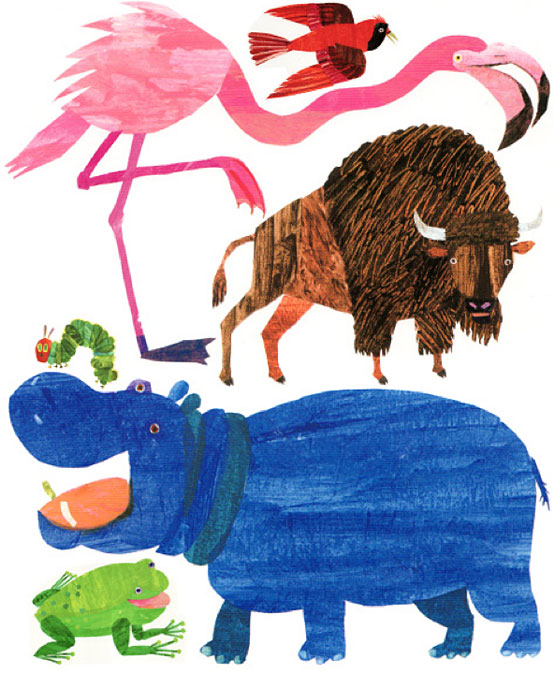 “Many people make collages. Artists like Picasso and Matisse and Leo Lionni made collages. Many children have done collages at home or in their classrooms. I happen to make my collage illustrations using painted tissue papers. You might want to try it too!” — Eric Carle (source) 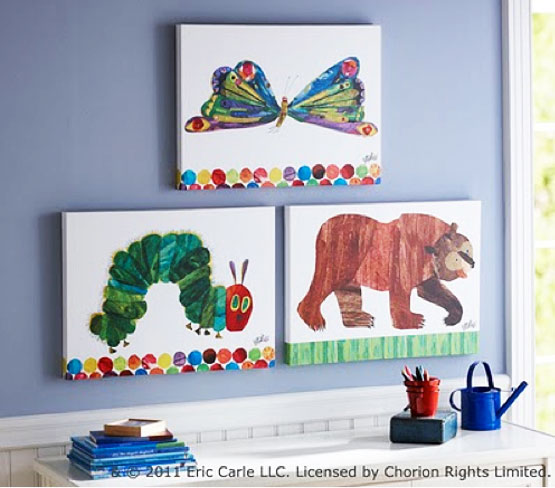 As the author of some of the most unique and well-recognized illustrations in children’s literature, Eric Carle is a true advocate of creative expression. We would do well to recognize our own attempts at creativity as simply as Eric Carle does, meaning that anything goes. The imagination holds endless possibilities, and when we tap into our own creative wells, what will emerge? A beautiful butterfly? One can only hope there are a few purple penguins and lime green rhinos in there, too.

www.colourlovers.com/lover/monkeyfaceRobyn Sutherland is a freelance writer and editor from the green mountains of Oregon. She graduated from Southern Oregon University in 2005 with a B.A. in English and Writing. Her colourful life is filled with romps in the park, crazy vacations, and funny everyday adventures with her loving husband and two energetic little boys.

Thanks for the comments. I am excited to try my hand at making a collage Eric Carle style!
Reply

ive been imagining those things since I was a kid. ♥
Reply

This palette is fabulous! It's exactly that!

He is an amazing man :) Shaped my childhood, the hunfy caterpillar ♥
Reply

I did a great deal of research while majoring in early childhood and I used Carle's books a lot. His bright colors and words paints a picture in the mind of a child that recall of the story through narrative drawing from memory is second to none. I could read a story to a group of early childhood (primary before grade three) and have them to draw a picture telling the story....Giving them the freedom of color and subject and 99 percent of them drew and used the same colors as the subject in the story. Not only are his books good simple reads but it does something very few authors are able to do...it paints the story in the mind.
Reply

To understand and appreciate the work of Eric Carle you must understand some of his techniques that bring it to life. He assembles his drawings by making the individual colors then cutting out the pieces and shapes. He then places them as he wishes. It's like piecing a quilt . It brings to life the child like character and personality. I think he is a brilliant children's book author illustrator. 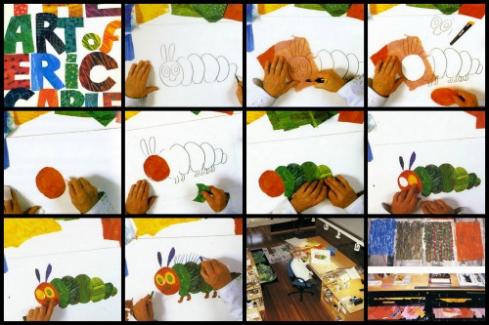 @molly ...you just gave me an idea for Christmas. I may try to make this or a mock wrap and wrap christmas presents with a gold bow and maybe a little bit of like a hot pink. or Christmas burgundy velvet
Team
Reply

very nice and vibrant colors there! i love his arts :)
Reply

One of my favorite artists and illustrators!! In my grade one class we read many of his books and discuss his artwork. One year we did some really cool illustrations by using his collage technique.
Reply