Stenciled walls are becoming quite the trend right now. And for good reason, it adds an awesome pop to the  room.  I have been dying to stencil a wall for a while now, the problem is, the process looks very daunting and frankly, a little tedious. Finally, I decided to go for it and stencil the main wall in my living room to give the rather drab room, a big pop. 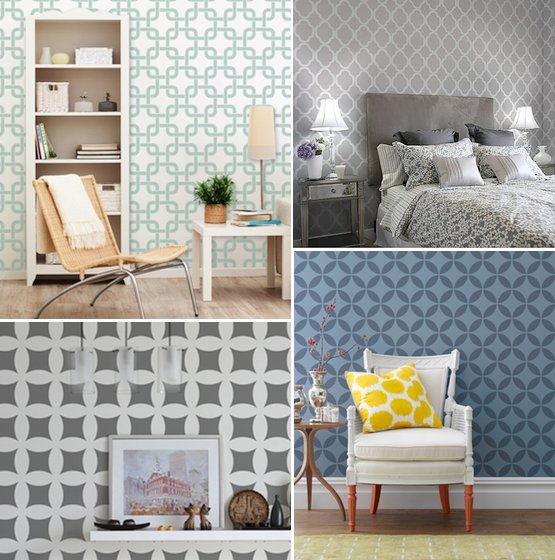 After looking through tons of color palettes and patterns, I set out to find the perfect gray and decided on a Moroccan pattern similar to the bedroom below. I bought the "Wall Stencil Marrakech Trellis" from CuttingEdgeStencils for about $50. 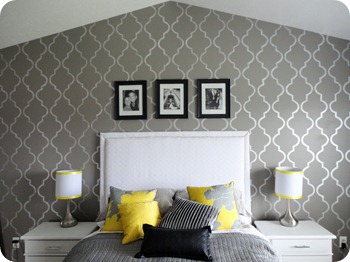 I tested several paint colors  in all shades of gray and finally found the perfect shade. I chose, "Timber Wolf" by Benjamin Moore. If you are in the market for the perfect gray paint, I highly recommend trying this. I have tried so many that were too blue, too purple, and too brown and found that this was the perfect gray hue.

After trying out 15 paint colors, I ended up with "Wolf Gray" by Benjamin Moore (seen below) because I switched and confused the word "wolf" and ended up painting an entire wall a color I hadn't even tested before.

The photos don't translate the colors quite as well as in person. This shade is really a dark blue as opposed to a slate gray. After painting the wall the color you choose, the real fun begins. 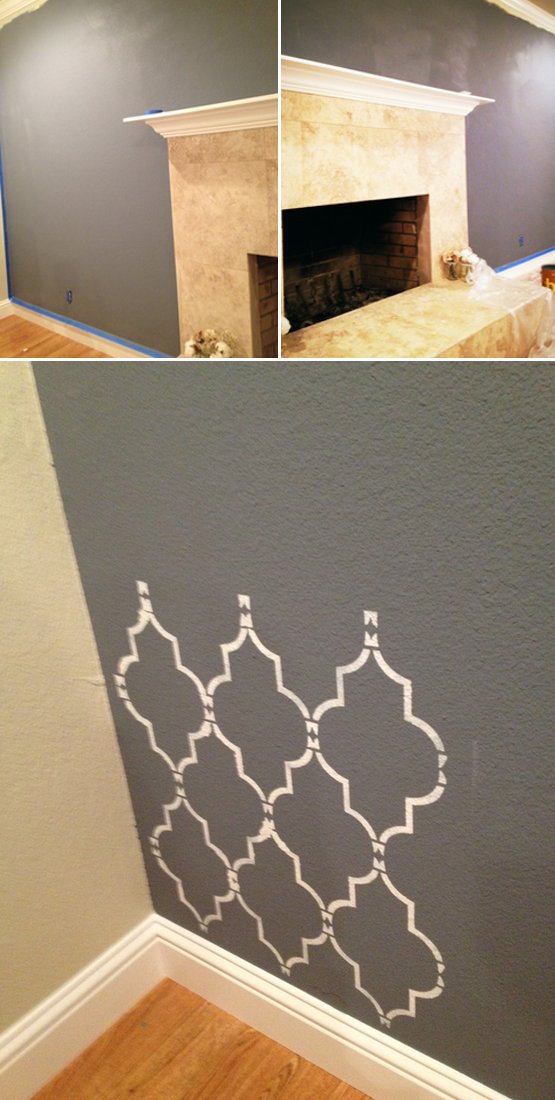 I started stenciling in the bottom left corner as it was the most discrete. My first chunk took 20 minutes to complete. As I continued it started getting a lot easier. Here are some pointers I learned through the process: 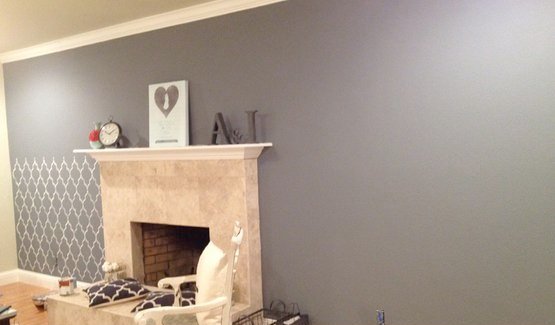 To ensure the stencil lines up and it is even throughout the wall, make sure the stencil is lined up with the white paint from the last group you did. Tape all 4 corners and its stays right where it needs to be for you to quickly roll over it. 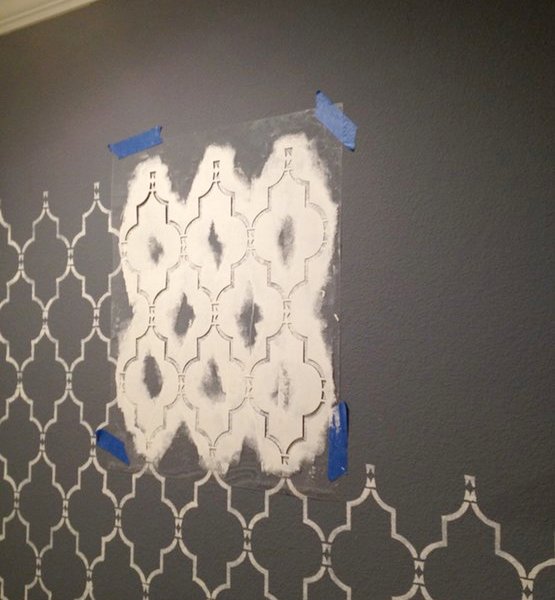 Doing a full wall is much easier than a wall with a huge fireplace in the middle. Luckily, the stencil I purchased came with smaller stencils to fill in areas and edges that the large stencil wouldn't fit in. For each edge of the fireplace, I used the smaller stencils and filled in the lines one by one. 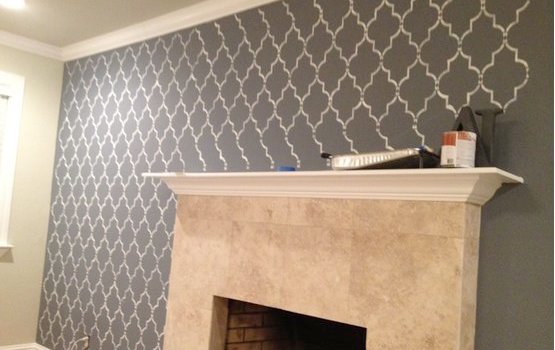 After several more hours of the same work over and over again, I completed the entire wall. There were places where paint clumped up, but when I finished the wall, it was hard to find those places that were smudged, so I decided not to worry about it. 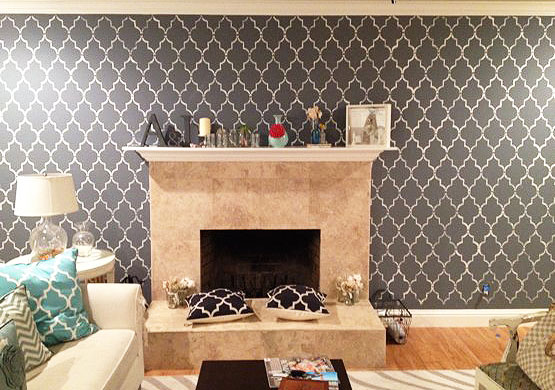 Overall it took about 10 hours to paint and stencil this one wall. It is definitely a lot harder than just picking a color, painting and calling it a day, but I love the look that this wall brings to the whole room.

As far as pairing decor with a stencil wall, the one problem is that you can't have too many other geometric patterns in the room as they all start to clash (hence the 4 pillows I have with all the same pattern). I decided to order a textured rug that was more muted, and some textured solid color pillows to balance out the patterns in the space.

If you like the look of stencil, check out the awesome selection of digital designs at Creative Market. 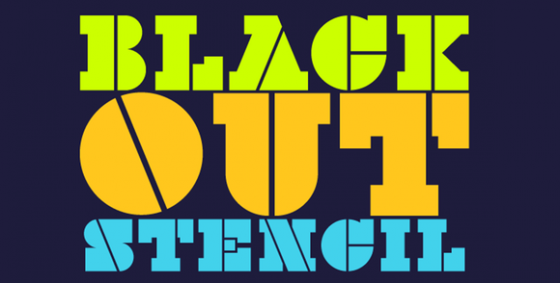 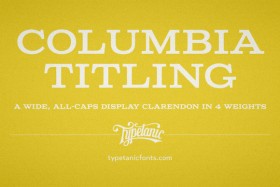 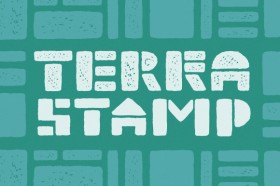 www.engagedandinspired.comAllison is the blog editor and gal behind the Twitter, Facebook & Pinterest at COLOURlovers. When she is not spreading color love around the web, she writes and manages Engaged & Inspired, a wedding blog and vendor resource for brides.
16 Comments
Showing 1 - 16 of 16 Comments
Team
Reply

Great design, I've been wanting to paint in grey for a while. It's a rather popular color right now! Wall looks great.
Reply

Moroccan design is so lovely. ^_^
I'd love to do this in jewel tones. Metallic gold on dark fuchsia or a deep royal blue (going along with the Moroccan theme as the Moroccans are known for their bright, jewel-toned decor) would be perfect!
Team
Reply

Great job with the stencils! The picture with the grey, black, white, & yellow is awesome! (What a great color combo!!! :D)
Team
Reply

yes it is and I totally love it :)


Great design, I've been wanting to paint in grey for a while. It's a rather popular color right now! Wall looks great.

that would be pretty awesome.

such a great color combo! I am trying to add a little more yellow into my decor lately. It is so bright and happy feeling!


Great job with the stencils! The picture with the grey, black, white, & yellow is awesome! (What a great color combo!!! :D)

beautiful ...A great way to paint the wall colors and finest
Reply

I love morrocan style.its a rich &powerful style.thank you so much.
Reply

definitely! painting is so much easier and so much cheaper than wallpaper or many other options


Love, love and love! Great fan of Moroccan tile....and that's a lovely, modern way to get the look. Certainly more budget-friendly, yet trendy.


beautiful ...A great way to paint the wall colors and finest