By Colette Bennett // March 23, 2011
10 comments
There have been many artists over time whose work can be confused with that of another artist with a similar style, but Camilla d'Errico is not one of them. Growing up on a steady diet of cartoons, manga and anime, Camilla has become a remarkable full time artist with a distinctive style of her own, creating everything from original paintings to t-shirts, comics and more.
COLOURlovers had a chance to catch up with Camilla recently, and we learned about a lot of exciting new projects coming this year. She's just about to launch her own graphic novel based on the Helmet Girls series, and she's also got a comic series based on her character Tampopo coming very soon. Read on to learn more about the woman behind the beguiling and feminine creations!

COLOURlovers: You've mentioned in your bio that you loved cartoons and manga as a kid. Can you name any early influences?

Camilla: Oh for sure! Cartoons shaped my life!  Disney movies, Sailor Moon, Pokemon, Masters of the Universe (He-Man & She-Ra of course!), just to name a few.

COLOURlovers: When did you first start to draw?

Camilla: The first memory I have of drawing was when I was 5. I was drawing before then, like all kids, but there's a particular moment that was like me realizing my calling. I drew this snow leopard and I was just so proud of myself! I loved it, and that is when I knew I wanted to draw for the rest of my life. 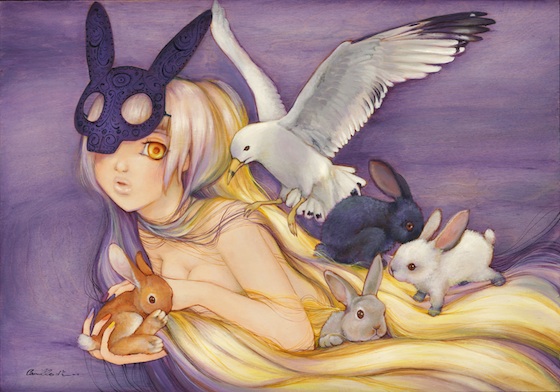 COLOURlover: Can you tell us about the process that lead you to create the Helmet Girls line? What kind of feelings are at the heart of these paintings for you?

Camilla: Helmetgirls is so close to my heart, but ironically they "came to be" by accident. It was when I was in college and doing class art assignments. I was drawing and painting characters with various hats, aviator helmets, etc. and at some point, without realizing it, I was adding elements to the "hats", and they got stranger, and more mechanical, and more intricate. These helmets also came out in my paintings and from there, I guess the rest is history! I've created something that has meaning to me because the helmets are extensions of my imagination.  Helmetgirls is who I am and everything I want to express. And it's encouraging that SO many people love them, especially the black line work in it's purest form.

COLOURlover: When did you start getting involved with comic related projects? What was your first?

Camilla: I know that a lot of people know me for my paintings and so it might surprise you that I started out in comics - it's my main career that got sidetracked when my painting career grew and took so much of my time!  But since I discovered comics when I was 16, it is the only career I'd wanted to pursue. I started working in comics when I was 18 - for small publishers and without being paid. My very first project was with Committed Comics and my first full length series was called Zevon-7. 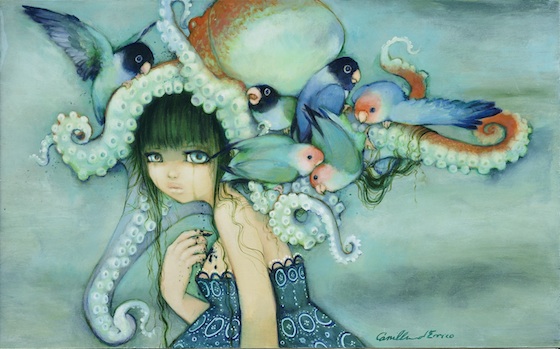 COLOURlovers: Do you enjoy live sketching?

Camilla: I do!  It took some getting used to because drawing and painting were very personal to me, because of how much of myself I pour into it but after a few times, I realized that I really liked painting and drawing in public. It's exciting to share my process with people right then and there - to let them into my world in some ways - and their questions and their comments and their energy feeds me creatively.  It's how Zebramilk got started - I began that painting during a live painting class at Anime Evolution convention in Vancouver last year.  I've gotten into the live drawing event-parties more and these are really cool because it's a totally social, party scene and tons of fun. My latest was the Emerald City Comic Con live paint event in Seattle.

COLOURlovers: What's your process when you begin a new painting?

Camilla: I go through lots of ideas in my sketchbook for new paintings. My sketches are really, really loose, not nice and tidy like so many other artists. I ask for a lot of feedback from people I love, friends and family about ideas.  Then, when I've chosen one, I try to make the sketch tighter, but it's still not much more than some loose shapes.  The reason is that even my best laid out sketch will never become a reality on the wood panel. I use the wood to dictate the outcome of the painting. When I start painting I sketch the lines on the wood, using the wood's imperfections to guide me. Then I begin painting and I don't ever follow the same sequence. Sometimes I start with the eyes, sometimes they are the last part of the painting. It all depends on how the painting comes to life. I don't create what I picture or plan - it's the painting that creates itself through me. 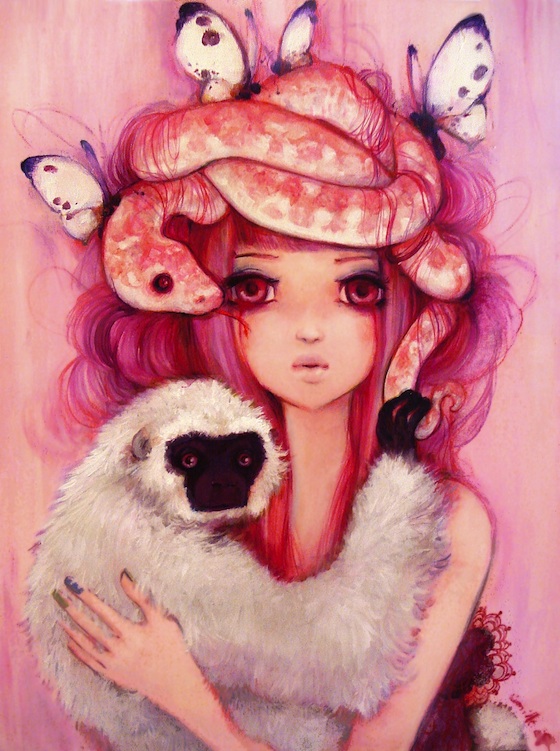 COLOURlovers: How many conventions do you attend a year? Do you enjoy meeting your fans?

Camilla: I go to 8 or 10 conventions personally each year. And I have an awesome crew of people who go to another 5 or so. In total we do about 15.  I absolutely LOVE meeting my fans!  Conventions give me so much energy and drive. Meeting people that are so genuinely excited about the art or my comics is like recharging my creative batteries. Even though I come home totally dead tired, voiceless and usually with a cold, I'm energized and and ready to hit the pages or paintings.

COLOURlovers: Can you share anything with us about the upcoming Helmet Girls graphic novel?

Camilla: All I can say is that the writer is Joshua Dysart; he's one of the greatest writers, in my opinion. He's going to infuse the story with so much emotion and adventure. It'll be a story very, very close to the Japanese story telling style - true manga style. We want to draw readers in, grasp them emotionally, get them into the story itself.  We're going to start with an issue #0 late this year - to get some excitement and promo going. 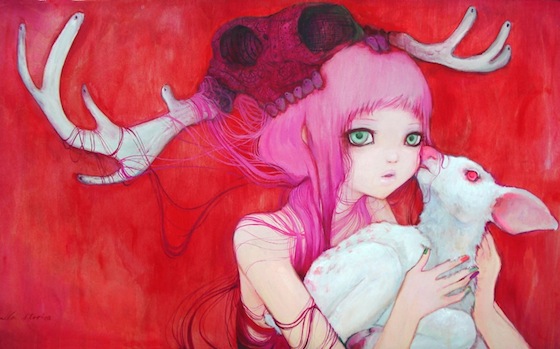 COLOURlovers: What do you dream of doing next?

Camilla: I'm dreaming of Japan and even though now they are working through one of the toughest moments in their history, I admire their culture. My main influence is derived from Japanese art and storytelling, so it would be my dream to be published there, to be recognized and loved there. Helmetgirls will be a big part of that, so I hope that it will naturally lead me there.  And if I'm ever able to - I'd like to sculpt. It's a secret passion of mine that I don't have time for right now. I'm so busy focusing on my comics and painting careers!

COLOURlover: Finally, what manga and anime do you currently read/watch that continues to inspire you?
Camilla: Here's a laundry lists of favorites: Naruto, Clamp, Tekkonkinkreet, Cencoroll, Samurai Champloo, Akira, Moyashimon, Genshiken, Natsume Yojincho, HellGirl and the Samurai X OVA.
COLOURlovers: Quite a list! Thank you so much for your time.

www.tomopop.comColette has written for a number of video game websites including Gamasutra, Kotaku, and Destructoid and co-hosted one hundred episodes of gaming podcast RetroforceGo! She also founded her own collectible toy culture blog in 2008, Tomopop.com, which has since served the needs of over 2 million plastic-obsessed readers.

Gorgeous post! I love the works of Camilla!
Reply

Oh wow, I love her works!
The second-to-last painting has colors that are simply perfect; I really like the way those whites pop out! (:
Reply

Thank you so much for this!

I was researching for work and stumbled upon Camilla d'Errico about 3 weeks ago. I felt like I had won a prize, and now to see this interview here on Colourlovers has made my day.
Reply

It's great to read an interview with such a creative and talented woman.

oo nicee.. i love it
Reply

Such amazing paintings! Oh, I envy that kind of skill! (But the world would be a boring place if all artists thought and drew alike)
Reply