The black circular world of vinyl records took on a new spin with the introduction of the first picture discs in the 1940's and the widespread use of colored vinyl in the 1970's, setting off a trend of crafted vinyl; a trend that has reemerged in today's small batch record releases popular with DJs and collectors.

While focus is usually on album cover art, working color & design into the actual record itself adds another layer of craftsmanship, and creates another outlet for special/limited edition records to catch the eye of collectors & enthusiasts.

Here is a selection of some of the colorful endeavors in crafted vinyl records. 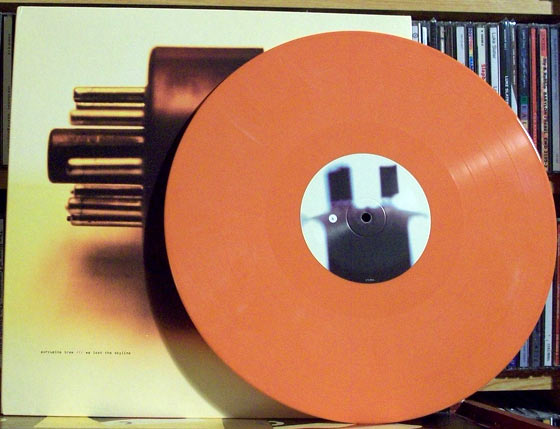 Vogue Picture Records: approximately seventy-four titles were produced by Sav-Way Industries of Detroit, Michigan from May 1946 through August 1947. They are highly prized by collectors for their colorful designs. 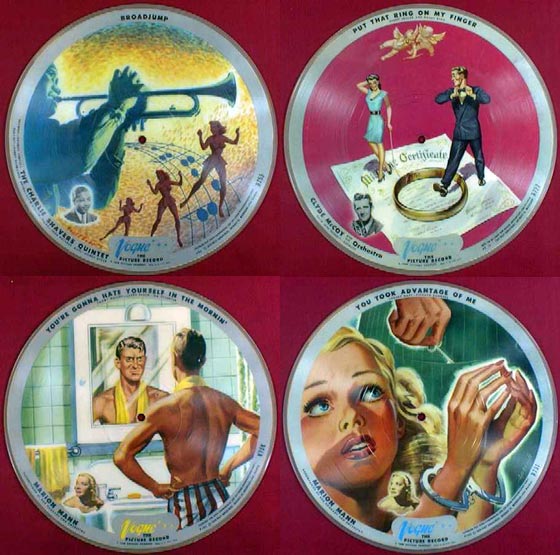 In the 1970s we began to see the use of colored acetate instead of black vinyl. The whole spectrum was available, from clear transparent white, red, blue, yellow and even multi-hued (including a witty transparent 12" of Queen's The Invisible Man, though German Group Faust released their debut album with transparent vinyl and cover in 1971). 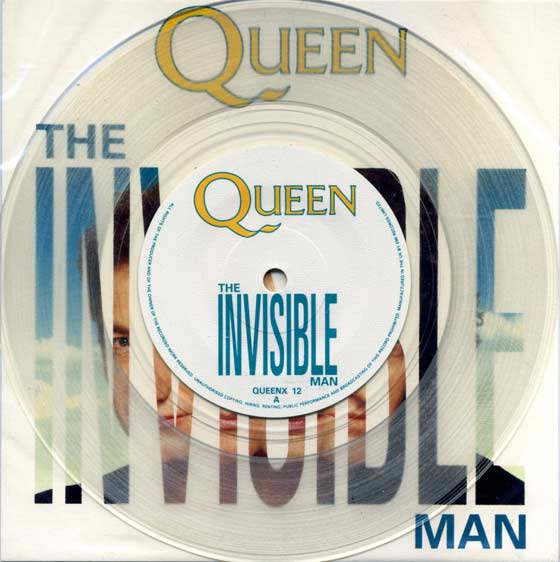 For Stevie Wonder's "Journey through the Secret Life of Plants", the record featured a layer of blotting paper between the clear vinyl layers that contained Alfalfa seeds. A tag of the blotting paper protruded below the record, and resting the disc on a glass of water with the paper in the water allowed the seeds to germinate and grow inside the record. When the prototype was taken through customs in Canada it was seized by the Department of Agriculture, making it not only the only real live album but the only record ever banned by the Department of Agriculture (alfalfa being a prohibited import).

On some picture discs, the images used were meant to create an optical illusion while the record was rotating on the turntable, while others used the visual effect to add to the music — for example, the 1979 picture disc of Fischer-Z's The Worker featured a train which endlessly commuted around the turntable, reinforcing the song's message. 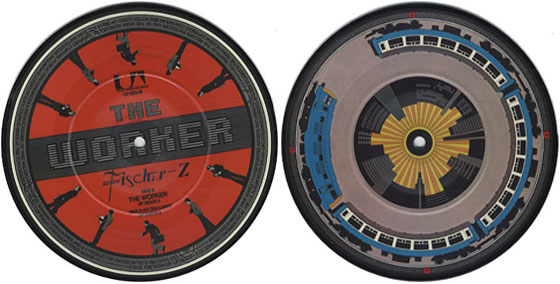 Made in 1978, this Han-O-Disc Liquid Disc is filled with aniline dye colored silicone fluids and oils that freely move around. This disc was a prototype for the Disney movie The Black Hole (1979) but leakage proved too great a problem and it was never released.  Finnish electronica group Huminoida released a 7 inch called Self-titled, which B-side was hand carved by the band members. It was limited to 300 unique copies. The Ramones album Road to Ruin on transparent yellow vinyl.

The 1980 A&M Records LP of Split Enz's album True Colours was remarkable not only for its multiple cover releases (in different color patterns), but for the laser-etching process used on the vinyl. The logo from the album cover, as well as other shapes, were etched into the vinyl in a manner that, if hit by a light, would reflect in polychromatic colors. This laser etching does not affect the playing grooves. 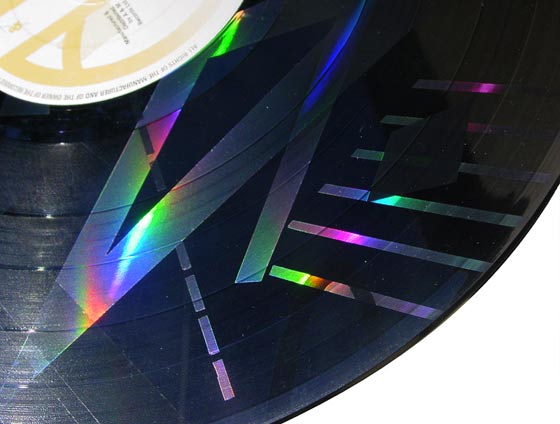 Beautifully crafted vinyl records. Most are small print editions and many of his products have intricate layers of different colored vinyl with creative, dynamic graphics on both the album and sleeve. - American Craft Magazine Blog 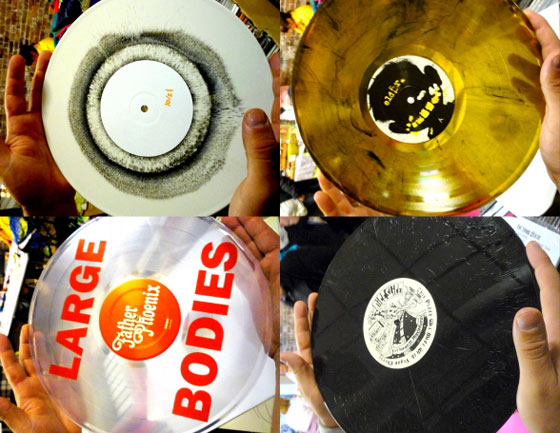 For the release of Boris's "The Thing Which Solomon Overlooked 2," 700 orange copies were pressed and sold on Conspiracy's website and various distributors, while 300 green copies were sold on tour. - Academic Encyclopedia 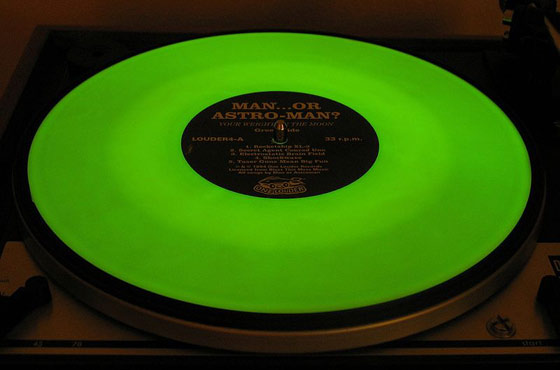 Kraftwerk released a 12" single of "Neon Lights", made of glow-in-the-dark plastic.  Update 4/5/10 : while Kraftwerk did make such an album, the picture above is not it but rather Man or Astro-man's 'Your Weight on the Moon'. 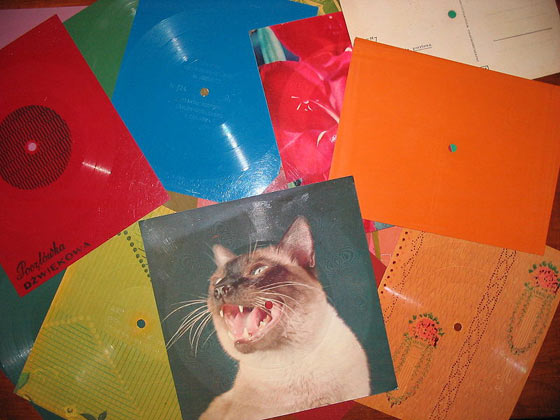 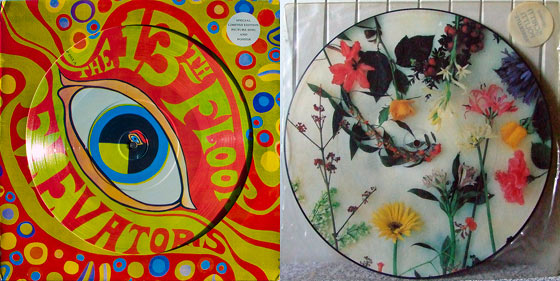 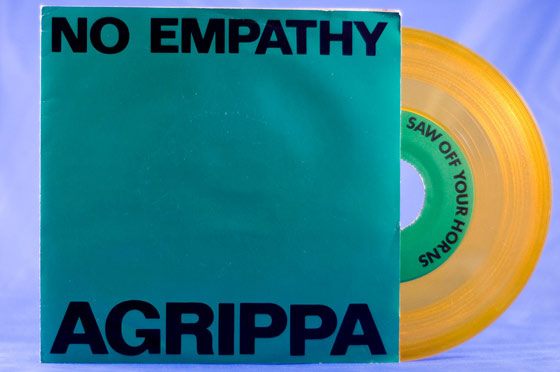 Got any unwanted vinyl records? Check out some DIY projects like these: Unwanted Vinyl Record Projects

I used to collect decades ago and it's all now in storage; PM me for some rares.
Reply

I just got a record that's from a Norwegian band (Datarock) and it's translucent red - the album is aptly titled "RED". It's so cool. I got to show off. :D This was a great post!
Reply

Mmmm, those are some beautiful records.
Reply

oops... indeed you are right, Ridernyc. thanks for the catch.

thanks for all the comments.
Reply

I love colored vinyl. I love it even more when you're not expecting colored vinyl when you buy a record and the out pops a neon green or ruby red disc from the sleeve.

as a DJ and record collector, and a *very* new addition to this site, I was just floored by this! thank you so much! :o) ekb*